While Rafale contract was being negotiated, MoD policy amendment did away with scrutiny of offset proposals 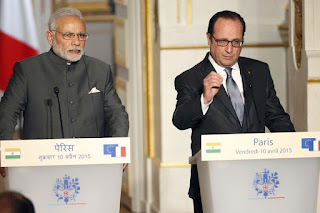 The National Democratic Alliance (NDA) government paid French vendor Dassault Euro 7.85 billion for 36 Rafale fighters, or an average-per-fighter cost of Euro 217 million. That is 40 per cent higher per aircraft than Dassault’s quote of Euro 19.5 billion for 126 fighters – or Euro 155 million per Rafale – that it submitted in response to an eventually aborted tender issued in 2007.

This, even though the terms, conditions and aircraft configuration in the 36-Rafale deal in 2016 were almost identical to the Indian Air Force (IAF) specifications in the 2007 tender – termed Request for Proposals (RFP).

Business Standard has reviewed the 2007 RFP in detail.

The government claims the 36-Rafale contract of 2016 contains elements beyond those in the 2007 RFP. It says the Euro 7.85 billion deal included Euro 1.7 billion in avionics upgrades, called “India specific enhancements”; weapons worth Euro 700 million, essential spares worth Euro 1.8 billion and a Euro 350 million performance guarantee that 75 per cent of the Rafale fleet would be operationally fit at all times.

As Business Standard has reported, the 2007 RFP mandates the same “extras”, including advanced “India Specific Enhancements”, a weapons package, an “Essential Spares Package” and a 75 per cent performance guarantee. All these were included in Dassault’s Euro 19.5 billion bid in 2008.

Officials also claimed that inflation accounts for the Rafale’s higher cost in 2016. In fact, the 2007 RFP mandates (in Annexure 1 to Appendix E) that vendors’ quotes must be reduced to the Net Present Value (NPV) – a variant of the Discounted Cash Flow (DCF) method. This discounts inflation during the delivery period.

Amidst these similarities, the two proposals diverge dramatically in their approaches towards offsets, which, in both the MMRCA proposal and the Rafale contract, amounted to 50 per cent of the value of the foreign exchange component of the commercial bid, or about Euro 3.9 billion.

The 2007 RFP, which is governed by an Offset Policy spelt out in the Defence Procurement Procedure of 2006 (DPP-2006), specified three paths for discharging offsets: First, direct purchase, or export, of Indian defence products. Second, direct foreign investment in Indian defence industry and, third, direct foreign investment in Indian organisations engaged in defence research and development (R&D).

The Indian defence industry or organisations involved in discharging offsets are referred to as Indian Offset Partners (IOP).

In the 2007 RFP, the defence ministry assumed full responsibility for overseeing the vendor’s offset proposals, so as to maximise its benefits. The RFP designated the defence ministry’s Defence Offset Facilitation Agency (DOFA) as “a single window agency to facilitate implementation of the offset policy, assist in vetting offset proposals technically, assist in monitoring the offset provisions and suggest improvements in the policy and procedures”, in addition to other functions.

Mandating close defence ministry involvement, the 2007 RFP stipulates: “The DOFA will assist potential vendors in interfacing with Indian defence industry for identifying potential offset products/projections as well as provide requisite data and information for this purpose.”

So central were offsets to the main MMRCA contract that the 2007 RFP required vendors to submit written undertakings, along with their technical and commercial bids, which were to be submitted on March 3, 2008  that they would “meet the offset obligation as laid down in the RFP”.

This has allowed Defence Minister Nirmala Sitharaman to deny any knowledge of the decision to make Reliance Defence, with its weak financial standing and inexperience in aerospace manufacture, the largest offset partner in the Rafale deal.

Sitharaman claims that her ministry has not yet been informed about which IOP Dassault has chosen for discharging Rafale offsets.

The August 5, 2015 amendment to DPP-2013 freed the Technical Offsets Evaluation Committee (TOEC) – the defence ministry body that pre-vetted and evaluated offset proposals submitted by vendors – from that responsibility.

Para 8.2 of DPP-2013 originally stated: “The TOEC will scrutinize the technical offset proposals… to ensure conformity with the offset guidelines. For this purpose, the vendor may be advised to undertake changes to bring his offset proposals in conformity with the offset guidelines. The TOEC will be expected to submit its report within 4-8 weeks of its constitution.”

This was enabled by adding the following sentences to Para 8.2 above: “If the vendor is unable to provide these details at the time of the TOEC, the same may be provided to DOMW (Defence Offsets Management Wing, an upgraded version of DOFA) either at the time of seeking offset credits or one year prior to discharge of offset obligations through that IOP.”

This amendment was, unusually, made applicable retrospectively: “These amendments shall come into effect immediately and shall also be applicable to all offset contracts and on-going procurement cases, irrespective of the applicable DPP.”

Consequent to this amendment, Dassault and its Tier-1 vendors, were no longer required to submit offset proposals for defence ministry scrutiny before the award of the 36-Rafale contract; and the ministry was no longer liable for vetting offsets proposals before awarding the contract.

While Dassault and Reliance Group have publicly confirmed their partnership for discharging Rafale offsets, and former French president Francois Hollande has stated that New Delhi left Paris with “no choice” but to discharge offsets through Reliance Group, Sitharaman contends that New Delhi had nothing to do with that choice, which was Dassault’s alone.

The Reliance Group, in a legal notice served on six entities for alleged defamation, has stated that the Euro 3.9 billion offset liabilities linked with the Rafale purchase is divided between Dassault, which manufactures the fighter’s airframe and is the prime integrator; Thales, which supplies the avionics, Safran Aero Engines, which provides the M88 engines and MBDA, which supplies the weaponry. The notice says “Dassault’s share in the total offset Export Obligation (sic) is approximately 22%, or Rs 6,600 Cr (Rs 66 billion).

The Opposition has launched a vocal campaign accusing the NDA government of “crony capitalism”, by pressuring the French government to ensure Dassault discharges its offset liabilities through Anil Ambani’s Reliance Group – which denies wrongdoing. The matter is now being heard by the Supreme Court, which has scheduled a hearing for Wednesday.
Posted by Broadsword at 07:48

Excellent analysis. The smokescreen thrown around this deal has been confusing the layman. Thanks to your persistent investigations we now have a much clearer picture . Keep it up !

The 2007 RFP of MMRCA also required the company providing Offsets to be a either a DPSU or a Defence License holder or an RUR. That is why BHEL a PSU has taken defence licences in 2006 - 07. In 2012 when Reliance Group (Orignal not ADAG) was trying to get into the Rafael deal as an Offset partner MoD carried out change in Offset partner norm dilution. Reliance then had hired an Ex Boeing India CEO. With thier considerable clout in bureaucracy they ( Reliance ) had succeeded in getting what they wanted but they did not succeed in overturning the time tested norm of “ no restroprestive amendments “ in a procedure as such a change in process effectively changes RFP terms already bid.

Supreme Court had first asked for a Process Audit on Rafael last month. As part of that audit I hope that it will examines the difference in August 2015 Offset amendment and August 2012 one too . In national intrest, I hope Supream Court will look at “Process of Procurement” in its entirety and not from 2015. Hope it is part of the pleading in Supream Court.

This beings me to another crucial point on cancellation of RFP for MMRCA and start of the new G to G proceed to buy Rafael. As per RFP term the Offset partner in 2007 needed a Defence Industrial License. As this was an RFP term, it was independent of Offset procedure. Thus had MoD continued with a deal under the RFP, entry of Reliance ADAG was not possible/ difficulty. It is on record that Dassault Chairman 17 days before announcement and Indian MEA Secratary 2 days before the Paris announcement of the deal by Hon’ble PM Modi ji with President Holland the Orignal MMRCA RFP was still in play. If RFP was canceled to benifit Reliance ADAG then the process of cancelation of RFP itself is a matter of investigation by Supream Court and it’s possibly direction to CBI for a probe.

I was hoping for a more objective assessment along with the military implications.
There are already more than enough political spin jobs in this subject, many of which cross all ethical boundaries.

what logic is there in comparing a quote with actual purchase that too after 10 years.. this is comparing apples with dried grapes that you did not buy.
please grow some sense and don't be so biased. sick of such prestittues