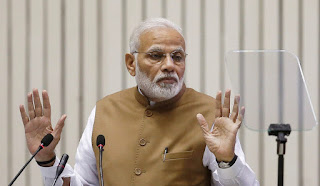 India’s Supreme Court is considering a petition that calls for an investigation into the government’s purchase of 36 Rafale fighter jets for an allegedly inflated 7.85 billion euros ($8.96 billion). At stake is not just the modernisation of the Indian Air Force’s (IAF’s) ageing fleet, but also the credibility of Prime Minister Narendra Modi, who came to power in 2014 promising an end to corruption. With general elections due in early 2019, the opposition is on the attack.

How important is the Rafale contract for India?

India faces two powerful regional adversaries – Pakistan and China – but the IAF is worryingly short of combat aircraft. New Delhi planners assess that the IAF needs 42 combat squadrons (each with 18 aircraft) to meet this dual threat. However, it currently has just 31 squadrons including 10 squadrons of obsolete Russian MiG fighters soon to be junked. The replacements for these have long been delayed.

The domestically developed Tejas light combat aircraft, already a decade late, will take another five years to enter service in substantial numbers. And with the Sukhoi-30MKI, which India builds under licence from Russia, at the tail end of its production run, no new fighters are in sight. The smooth introduction of the Rafale jets is, therefore, imperative.

Why is there such controversy over the deal?

Modi rode to power in 2014 on a wave of right-wing nationalism and a flurry of promises that he would overcome his predecessors’ neglect of national defence by fast tracking the introduction of modern weaponry. A tender for 126 fighter aircraft that had been in limbo for over a decade was low-hanging fruit that Modi could have easily plucked. The previous government had homed in on Dassault’s Rafale fighters, but then got bogged down in prolonged negotiations. Yet instead of pushing that deal through, which would have seen the jets being built in India, Modi announced its cancellation in favour of a government-to-government purchase of 36 ready built planes during a visit to Paris in April 2015. This went against Modi’s hyped “Make in India” initiative and the declared intention to leverage that purchase to build up India’s aerospace industry.

Making matters worse, Anil Ambani – an Indian industrialist with no experience in aerospace manufacture seen as close to Modi – set up a joint venture with Dassault to benefit from so-called offset provisions linked to the contract. The government claimed Dassault had exercised its own choice in selecting Ambani as a partner. But former French president Francois Hollande, with whom Modi had announced the deal, insisted that New Delhi had picked Ambani.

The opposition has charged the government with weakening the IAF by buying fewer fighters, undermining India’s aerospace industry by scuppering the plan to build the jets in India, and indulging in “crony capitalism” to benefit Ambani. Modi stands accused of unilaterally slashing the Rafale purchase without following due procedure, which should have required consulting the IAF, the defence ministry and his council of ministers. The government denies the charges and has ruled out the opposition’s demand for a joint parliamentary investigation, realising that this would provide a public platform for political theatre. A clutch of public interest petitions have been filed with the Supreme Court, which is expected to make a pronouncement soon. Simultaneously, the Comptroller and Auditor General (CAG), is scrutinising the Rafale deal.

What is the Rafale controversy likely to cost Modi politically?

While the opposition’s accusations strike directly at the prime minister’s assiduously cultivated image as a “strong leader”, Modi still enjoys credibility among the masses. Previous missteps by his government, such as the chaotic demonetisation of high-value banknotes and the poorly planned introduction of a countrywide goods and services tax, have invited heavy intellectual criticism but the public remains unwilling to blame or punish Modi directly. The extent to which the Rafale controversy will damage Modi’s reputation depends on how much blame the Supreme Court apportions him with regards to three aspects of the procurement – the decision making, the price paid and the extent to which Ambani was favoured. Clear criticism of Modi in any of these areas would galvanise opposition protests and damage the prime minister’s image. The next challenge after the Supreme Court’s decision is the CAG’s audit report.

Is there a possibility of New Delhi cancelling the Rafale contract?

This is unlikely, especially given that one-third of the contracted price has already been paid, even before the delivery of a single aircraft. The Rafale contract contains an “integrity clause”, which stipulates that if any corruption or bribery is detected, the contract can be cancelled, with India entitled to a refund of all payments made. However, this would impinge on the IAF’s operational readiness.

Has the IAF closed the door on Dassault with the purchase of 36 Rafale fighters?

Given the IAF’s shortage of fighter jets, which will continue even after the Rafale deal is complete, India’s defence ministry initiated a fresh tender last April for another 114 medium-range combat aircraft. Dassault has offered the Rafale in this tender as well and theoretically enjoys a head start, thanks to the existing contact, over the six other fighters in the fray: Boeing’s F/A-18 Super Hornet, Lockheed Martin’s F-16 Block 70, Saab’s Gripen E, Eurofighter GmbH’s Typhoon, and Russia’s MiG-35 and Sukhoi-35. At the same time, the ongoing political dogfight could translate into negative baggage for the Rafale. 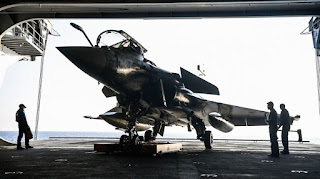 The French jets are also being considered in an Indian Navy tender for 57 fighters for its two upcoming aircraft carriers. In this contract, the Rafale would compete against the Boeing F/A-18E/F Super Hornet, which enjoys a clear advantage given the US Navy’s help in designing and equipping India’s future aircraft carriers.
Posted by Broadsword at 17:12

The very fact Ambani was given anything at all is a big scam,forget about make in India,comfort letter etc.Suspect also are the French nuclear deals as is the Iglas-S import,if and when it gets materialized.

Rafale was clearly an emergency purchase. The following 110 fighters RFI will have make in India part.
Hope we get Low Cost single engine jet here that can be manufactured locally quickly easily.
These equipped with stand off and BVR weapons should be as good as expensive twins.
Let us keep our neighbourhood capabilities in mind.

Someone needs to explain why MMRCA was never decided for so Long and probably all kinds contradictory notes over the period of time put up by Babudom and Politicians must have made decision impossible.