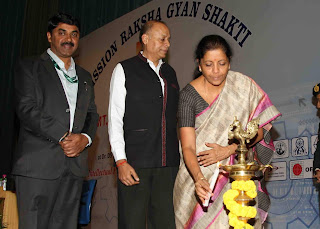 Stating that this required spreading awareness of intellectual property rights (IPR), the defence ministry (MoD) announced: “A target has been set to train approximately 10,000 persons of OFs and DPSUs on IPR in the financial year 2018-19.”

The MoD has set an aim “To achieve filing of at least 1,000 applications for IPRs by OFs and DPSUs within the current financial year (2018-19) and to sustain the momentum thereafter.”

Unveiling the scheme before a large number of OF and DPSU officials, Sitharaman said DPSU and OF technologists created many new processes and hardware, but were not aware of the need to file for IPR, or the process of obtaining it.

“Neem (Indian Lilac) was first patented for its properties abroad. So was Haldi (turmeric), which was first patented abroad for its medicinal properties… Ghar ki murgi daal barabar,” said Sitharaman, using a Hindi proverb for the tendency to downplay our own achievements, and take them for granted.

Kumar cited the example of a brake pad switch developed by Hindustan Aeronautics Ltd (HAL) for the Tejas fighter. With design knowledge of the brake pad switch, HAL can now adapt it for use on other fighters as well. This would not be possible if HAL was only manufacturing a Tejas brake pad switch, based on ToT from a foreign vendor.

Kumar pointed out that, despite producing defence equipment worth Rs 60,000 to 65,000 crore in the public sector, and another Rs 15,000 crore in the private sector each year, India has had “a manufacturing based eco-system, with little focus on design.”

The MoD revealed that a “Nodal Centre for IP Facilitation” had been created in April 2018. “So far 23 officers have been trained as master trainers in RGNIIPM (Rajiv Gandhi National Institute for Intellectual Property Management), Nagpur. Up to October 2018, 5,283 personnel have been trained in IP.”

The DRDO chief, G Satheesh Reddy, cited the example of the Defence R&D Organisation (DRDO), which he said is awarded about 500 patents every year. “The DRDO stands at number two in the country in IPR portfolio,” he said.

Reddy pointed out that the award of a patent could take up to five-to-seven years, depending upon how well the patent application is structured and written.

Awards presented for successful patents, however, were all for projects that were several years old and, in some cases, even decades old: the now ubiquitous Electronic Voting Machine, patented by Bharat Electronics Ltd; the composite rotor blade for the Dhruv helicopter and a landing gear lock for the Tejas fighter, developed by HAL and a special alloy steel for defence applications.
Posted by Broadsword at 08:10

Artificial intelligence and such cutting edge technologies shall change the battlefield stratigies in future. CYBER warfare WHERE CHINA IS vastly ahead of us requires armed forces to more IT AND TECH SAVY.

CHINA IS AHEAD IN SUPER COMPUTER TECHNOLOGY AND IS DEVELOPING QUANTUM TECHNOLOGIES.

Complex TECHNOLOGIES/R&D TODAY REQUIRES BIGGER CONTRIBUTION FROM OUR INDUSTRY. But unfortunately the eco system does not exist unlike Israel.

Speeches are fine, we need to action on ground.
Whenever a Govt takes any action out of ordinary to involve pvt sector, Politicians of all colours cry crony capitalism.
Look at ATAGS, India never had any experience in 155 mm artillery design least of TATA or Kalyan’s.
both rose to the occasion.
We need more such successes .

I hope Tata kestrel is selected by IA. That deal needs to be done or scrapped. TATA have sunk a lot of money into it.
Same wth minesweeper, Hand it to pvt sector with specs. They will find a way out and deliver.

Assault rifle story is worse, after having fought 4 wars, Countless insurgenicies, UN missions.... we have no clue on what kind of rifle we need ! We will now have three imported and another 2 or 3 make in India.
While in all other countries (including US that fights in more diverse theaters) there is only one (dominant) design .
Look at China one dominant design, continuously improved. 6.8 caliber. Absolutely innovative.

All above cases are fit for innovations , if not pure patents.
MoD, PSU and IA/IN have failed to deliver ! Only these Organizations can fix the broken procurement system.