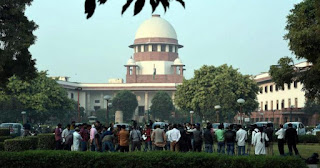 The government on Monday submitted to the Supreme Court (SC) details about the process by which it arrived at the decision to buy 36 Rafale fighters from France, while cancelling an ongoing tender for 126 Rafales, of which 108 were to be built in India. While the part on price details was submitted to the apex court in a sealed cover, Business Standard has reviewed a copy of the submission on the procurement process, which came in response to an SC order of November 1 and was shared with the petitioners – Yashwant Sinha, Arun Shourie and Prashant Bhushan – in accordance with the court’s directions.

While claiming that “all the requisite steps… have been followed”, the 16-page submission makes it clear the government did not take the most basic steps that are fundamental to any procurement and which are spelt out in detail in the Defence Procurement Policy of 2013 (DPP-2013), which governed the 36-Rafale purchase.

The government failed to involve the Indian Air Force (IAF) in formulating “service qualitative requirements” (SQRs), which specify the capabilities of the equipment being procured. Nor was the next step taken, which is the formulation of a statement of case (SoC), in which the military must justify the procurement.

The SoC is forwarded through two key acquisition committees – the Services Capital Acquisition Plan Categorisation Committee (SCAPCC) and Services Capital Acquisition Plan Categorisation Higher Committee (SCAPCHC) – to the Defence Acquisition Council (DAC), which accords an Acceptance of Necessity (AoN) to go ahead with the procurement. The SCAPCC and SCAPCHC decide whether the equipment is to be built in India, bought from abroad, or a mixture of the two.

Instead of going through these foundational steps, which would have involved the IAF in the decision, the government’s submission to the SC indicates that it assumed that the clearances granted for the 126 medium multi-role combat aircraft (MMRCA) procurement were also valid for the 36-Rafale contract, even though these were two fundamentally different procurements.

“The acquisition process for MMRCA had reached commercial evaluation stage after completion of all the standard processes as per DPP”, says the submission. “The background of the case was brought to the notice of the DAC where it was mentioned that operational capability of 36 Rafale aircraft will be in accordance with the SQR for the procurement of MMRCA.”

The government will have to square this statement with its assertion – made to justify the higher price of the 36 Rafales – that a range of “India Specific Enhancements” made the operational capability of the 36 Rafales contracted significantly higher than the Rafales in the MMRCA tender.

Thereafter, the government has submitted, it pursued the procurement as an Inter Governmental Agreement (IGA) with France, for which the DAC accorded clearance on May 13, 2015.

The dissenting opinions within the Indian Negotiating Team (INT) for the Rafale have already been reported in the media, including a dissenting note written by a joint secretary on the INT. These reports are corroborated by the number of times the DAC had to intervene in the negotiations. “The proposal for procurement of 36 Rafale was presented to the DAC on three occasions between 28thAugust – 1stSeptember 2015 and subsequently on 11thJanuary 2016 and 14thJuly 2016 for approvals on various aspects of the negotiations and directions”, says the government submission.

Paradoxially, the government has cited a growing enemy air threat to justify cancelling the 126-Rafale tender and replacing it with fewer fighters,.

“During this long period of inconclusive 126 MMRCA process (sic), our adversaries inducted modern aircraft and upgraded their older versions. They acquired better capability air-to-air missiles and inducted their indigenous fighters in large numbers… An urgent need was felt to arrest the decline in the number of fighter squadrons in IAF and enhance their combat capabilities,” says the submission to the SC.

It says it decided to procure the 36 Rafales through the inter-governmental route for geo-strategic advantages.  “Para 71 of DPP-2013 on Inter-Governmental Agreement (IGA) states that ‘there may be occasions when procurements would have to be done from friendly foreign countries which may be necessitated due to geo-strategic advantages that are likely to accrue to the country. Such procurements would… be based on mutually agreed provisions by the Governments of both the countries. Such procurements will be done based on Inter Governmental Agreement after clearance from the Competent Financial Authority (CFA).’ The CFA for procurement cases valued at more than Rs 1000 crores (Rs 10 billion) was the Cabinet Committee on Security (CCS) during the DPP 2013.”

Justifying the IGA, the government has submitted: “Of the total procurement of about Rs 7.45 lakh crore (Rs 7.45 trillion) since 2002 under DPP, IGAs of different kind… account for nearly 40 per cent.”

The submission to the SC, however, does not mention that the DPP procedure was scrupulously followed in those IGA procurements.

The Supreme Court will be hearing the case on Wednesday.

Shouldn't this be January 2012

This article is contradictory and defies military logic. When was comes, these words will not safe the nation but a few Rafales might make a difference. You need to assess what damage you are doing to the nation with your biased articles.