Army chief talks “hybrid war”, says first bring our side of Kashmir under control, then look at Pakistani side 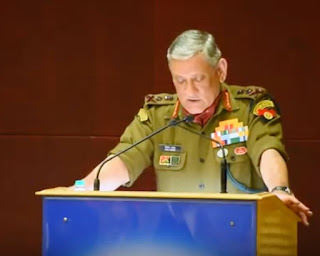 On Wednesday, soon after Pakistan’s Prime Minister Imran Khan messaged to New Delhi that his army and people were “all on the same page in wanting to establish a civilised relationship with India,” army chief General Bipin Rawat stated in New Delhi that India should be defensive, rather than offensive, in countering Pakistan’s “hybrid war” in Jammu & Kashmir (J&K).

Rawat was speaking in the Institute for Defence Studies and Analyses (IDSA) to elaborate India’s strategy for hybrid war – the new-age conflict in which conventional military force is boosted with the use of propaganda and rumours on social media, separatism, terrorism, fifth columnists and cyber disruption to cause social, economic and security chaos in a target country.

Rawat said the offensive option “would force our enemies to look inwards… and attack their internal dynamics, conflicts and fault lines”, without India having to wage a large scale war.

“However, India strongly believes in living in peace and harmony with its neighbours. The well being and development of our people through sustained economic growth remains our continued focus and our core national interest. Thus, creating unrest in our neighbour’s country should not be our first choice”, declared Rawat.

The army chief also warned against the use of terrorist proxies to fight Pakistan – a threat that former defence minister Manohar Parrikar had raised in 2015.

Rawat said: “As evidenced in Pakistan, there are no good terrorists and bad terrorists. Sooner or later, such use of irregulars as a strategy destabilizes the country internally. Also, it takes the focus away from development. Thus in my opinion, we should prefer the pro-active defence option against hybrid warfare, which would involve a “whole of government” approach.

““I advocate three lines of action. Firstly, work together [which] implies inter-agency cooperation in India, and working with international friends to blunt the hybrid advantage of the terrorist states. Secondly, we must communicate the right narrative to our people. Thirdly, we must be able to harness technology and make use of it optimally. This would require both offensive and defensive technology options, especially in the cyber domain,” said Rawat.

Rawat underlined the limitations of India’s “surgical strikes”, in which his army commandos had retaliated against the killing of 16 Indian soldiers in Uri by striking terrorist targets across the Line of Control in 2016 before quickly, and publicly, calling a halt to operations.

“We must have the capability to hit out at the perpetrators of hybrid warfare across [the border]. We do have the capabilities. But once we know we are going to employ those capabilities, we have to be prepared for an escalation. We have to very carefully prepare our escalation matrix, as to how far we are willing to go. Where will we call the end state?” said Rawat.

“We have to be prepared to see if it leads onto something bigger.”

In bad news for Kashmir, Rawat indicated that the high tempo of operations would continue, since he did not want militants to use a ceasefire to recuperate.

“Insurgency, which started in 1989, has had its ups and downs. We [several times] came down to a situation that we believed was hunky dory. But when things become comfortable, we went into a kind of limbo, thinking that peace has returned. Not knowing that every time peace returns, the terrorists have utilized this period to rebuild their capacity and strength. Therefore, sustained pressure is required… Let us look at tiring the other side”, said Rawat.

Demonstrating a practical approach to Indian political rhetoric claiming ownership of the entire J&K state, Rawat said: “I think first we have to resolve what is with us. Let us get control of what is with us, rather than looking across.”

“Pakistan has very cleverly changed the entire demography of so-called Pakistan Occupied Kashmir (POK) and Gilgit-Baltistan. So one is not very sure who is actually a Kashmiri… Is he a Kashmiri or is he a Punjabi who has come in there and occupied those areas. Gilgit-Baltistan is also being taken over gradually. To say that there is identity [similarity] between our side of Kashmir and the Pakistani side of Kashmir, I think that identity thing has gradually been eroded very cleverly by the Pakistanis. That is an issue we have to look at. First, let’s take control of our own part of Kashmir, bring it under control, get the system moving there and then start looking at POK,” said Rawat.
Posted by Broadsword at 12:12

With all respect to our good COAS, Kashmir is a straight up insurgency and not a hybrid war. May I request my fellow Indians from falling into American word games which are designed to obfusticate rather than clarify. An as an insurgency, we have been remarkably incompetent at it. Hearts and minds does NOT work. It never has. The only thing that works is draining the civilian sea in which the insurgents swim. We lack the fortitude and stern will to succeed. As for taking care of Pakistan, excuse me, I cant laugh or I wont be able to stop and all the hernia stitches in my abdomen will bust. Maybe we can take care of a herd of donkeys. Probably not even that, they'll surely outfox us. I am sick and tired of India making an ass of itself for the last 48-years I have studied India. I now plan to study linguistics, particularly Hinglish, which could become the true first Indian lingua franca, and which is a people's language. Very democratic, and the government of India has nothing to do with it. Which is iwhy t will work, IMHO.