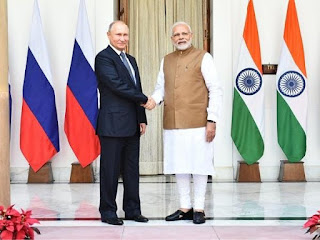 Meeting the press in New Delhi, Modi and Russian President Vladimir Putin avoided any mention of the S-400 during their comments to the media. Nor did the contract feature in an official Ministry of External Affairs (MEA) list of documents signed.

Eventually, India’s biggest overseas arms contract since the Rafale buy found official mention only through one brief sentence in the Indo-Russian Joint Statement, released by the MEA.

The joint statement noted: “The sides [New Delhi and Moscow] welcomed the conclusion of the contract for the supply of the S-400 Long Range Surface to Air Missile System to India.”

Business Standardlearns it was not wrangling over the price that clouded the deal with uncertainty. Instead, top Indian government officials disagreed on whether to risk US ire by concluding a deal that Washington has made clear it disapproves of.

Sources close to the negotiations say that, while Defence Minister Nirmala Sitharaman has consistently backed the S-400 purchase, National Security Advisor (NSA) Ajit Doval – who is more alert to US signalling – wanted to postpone signing the contract.

On his visit to Washington in mid-September, Doval met top US officials, including Secretary of State Mike Pompeo, Defence Secretary James Mattis and his American counterpart, John Bolton. They are understood to have warned him that India’s purchase of the S-400 might trigger US sanctions under the “Countering America’s Adversaries Through Sanctions Act” (CAATSA).

CAATSA binds the US administration to impose sanctions against countries that engage in “significant transactions” with Russian, Iranian and North Korean defence and intelligence entities. To exempt close partners like India and Vietnam, the US Congress has legislated a waiver that the US president can invoke. However, Doval was told there is no guarantee that President Donald Trump would invoke the waiver for India.

Two days after returning from the US, Doval received a top level delegation from Rosoboronexport, Moscow’s defence exports agency, to tie up details of defence contracts to be signed during the Modi-Putin summit. Doval expressed his strong reservations about signing the S-400 contract, given the “current climate” – an apparent reference to the Rafale controversy, but which could have also meant pressure from Washington.

In the days leading up to Putin’s visit, Moscow remained in touch with Doval’s office to tie up the visit agenda. The NSA steadfastly maintained that neither the S-400 deal, nor the deal for four Krivak III-class frigates, would be signed during Putin’s visit.

As late as Thursday, when Putin landed in New Delhi on Thursday, the Russian side was told that no defence agreements would be signed during the summit. However, Putin raised the subject with Modi, both on Thursday night and in the Friday talks.

“Eventually, it was Modi who took the call on Friday morning to go ahead with the S-400 contract”, says an individual close to the decision-making.

Even so, the announcement was done without flourish. “It is hard to say whether the government is more worried about blowback from the US Congress, or from the Indian National Congress,” quipped a senior civil servant.

According to Russian language technical papers published by designers of the S-400, it is designed primarily as an air defence system with only limited capability to shoot down ballistic missiles.

The designers of the S-400 Triumf (NATO designation SA-21 Growler) write it is built to shoot down aircraft at low and very low altitudes, even when stealth technology greatly reduced their target signatures. Its ability to track multiple targets caters for a crowded airspace with large numbers of aircraft, as well as drones. It is designed to defeat advanced electronic jammers and survive on a battlefield where the enemy is targeting the S-400 with precision guided munitions. The capability to engage tactical ballistic missiles and intermediate range ballistic missiles – the anti-ballistic missile (ABM) role – is mentioned at the end, almost as an afterthought.

Even though the first S-400 units might be deployed to protect Delhi – its long range allows it to cover the area up to the Indo-Pakistan border from deployment areas in the National Capital Territory – its primary mission will remain anti-aircraft protection. Guarding Delhi from ballistic missile attack will be the job of an ABM system the Defence R&D Organisation is currently developing and testing.

While the S-400 will be paid for from the air force budget, its vehicle-mounted configuration allows it to provide air defence cover to the army’s mechanised strike corps. It can also be fitted onto capital warships, like the Aegis system that guards US Navy warships.

Putin has travelled back to Russia on Friday evening, after attending the 19th India-Russia Annual Summit. The last summit was held in June 2017 in Russia.
Posted by Broadsword at 08:25

I think Mr. Doval's work experience in Pakistan has made him too cautious against the US sanctions.However, he doesn't realize that Crude prices affect both US and India for political reasons. Russia hinting to increase oil production if needed, US hinting that Iran Sanctions with respect to India can be given a waiver on a transaction-to-transaction basis, RBI's assumption that in the medium term , Brent crude to trade between $80-85, has perfectly aligned to help India, successfully go through the deal.It was also very considerate of the Russian President who requested not to make a big event of his visit and only wanted to materialize real businesses.
India standing straight is probably the best strategy in this US,China and Russia era.

This is one genuinely good call on the part of the PM and the RM. Regardless of what the NSA feels, deferring this crucial purchase would have sent very mixed signals to Russia as well as the US. India has stood up to US sanctions earlier in 1998 after the nuclear tests. The strategic climate changed quite quickly then to a point where India was accepted as a de facto nuclear power recognised by the world community. A similar shift may or may not happen but we must safeguard national interest and send a strong signal in this regard.
Moreover, there is little consensus even in the US government regarding the full implications of the CAASTA Act. The US Treasury Department's website says,"(D)iffering foreign policy and national security objectives may result in differing interpretations of similar language among the three titles of CAATSA." Rather than be apprehensive about what may or may not happen we might as well commit ourselves firmly to our trusted allies and signal strongly that we mean to safeguard our national interest at all costs.

Defence procurement are strategic decisions, hence need to be publicised based on the gains. Here the adversaries have been “warned”, not giving much hype enables Trump to quietly sign the waiver for India and most importantly the deal tells Russia that India is still more valuable than Pakistan as a buyer of defence equipment

Dear Ajay sir,
How does S 400 compare with the Tom Hawk cruise missiles? That to from the 3 point tracking system of the Tom's..
Also, what are the subtle difference between S-400 & the SA-21 Growler?
What are the immediate repercussions of CAATSA? Will it kick in now that the S-400 deal has been signed or only when they are delivered?
Can the S-400 defend against the missiles Hatf,Babur & other ICBMs?
Which is the best Anti aircraft irrespective of altitude the incoming aircraft(fighter jets/,bomber or even the stealth) or it's speed (supersonic) that can succinegate it in mid air and what are the typical response time?
Will Modiji go in for a change in NSA & dump Ajit Doval sab if the CAATSA gets applied on India...

Dear Ajay, In your previous articles when you had to criticise government over inaction on S-400 deal, you have praised the system so much describing it as a game changer. Now, since a BJP government has signed it, you are trying to play down the system and your article trying to paint it as if it's waste of money. I know the paper you work for is sold to congress. May be try not to publish those paid articles here in your blog that are written for any political party.
Cheers!

I've dealt with americans for over a decade. I would say they are quite resonable but can start dictating when they think they can have their own way. America is doing the same. India's old positions were better when no US equipment was present. We need to go back, take a step back and move forward with other countries. We should not encourage hegemonic behavior.

hello Ajai, somebody planted a story and you seemed to have fallen for it. What is interesting is that our RM was missing and elsewhere when the country was signing the contract? why so? when the CCS cleared the deal all stakeholders would have been there. and enough signals were given that this deal was in the offing....so this whole idea of internal rift is just BS...it will neither placate US nor the Russians. now for the waiver we must buy something from US, is this why no contracts were announced when the 2+2 was taking place? so that deals can be done after S400?
lastly we have missed a huge opportunity by not signing Krivak, kamov, Mil, AK and AWACS contract. every time we sign we have to deal with CAATSA so in one shot we should have cleared all contracts.
Can you update on FGFA?
I have a feeling that congress will cry foul again as the offsets have been waived off.

This govt deserves credit for taking this bold decision. We should have purchased long back but there was no vision...despite caatsa its worth going ahead. No we must focus on sea power and boost IN capabilities.