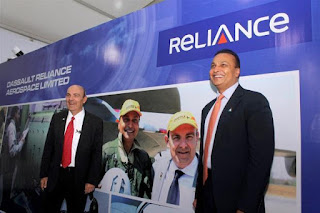 There are different versions of how much business has flowed to Anil Ambani’s joint venture firm, Dassault Reliance Aerostructures Ltd (DRAL), through offsets arising from the Indian Air Force (IAF) purchase of 36 Rafale fighters for Euro 7.8 billion – the equivalent of Rs 59,000 crore (Rs 590 billion), when the contract was signed in September 2016.

In this acquisition, the defence ministry demanded offsets worth 50 per cent of the contract value. That requires Dassault Aviation and its Tier-1 vendors – French firms Thales, Safran Aero Engines and MBDA – to invest about Rs 30,000 crore (Rs 300 billion) in Indian defence R&D, manufacture or services, for discharging their offset liabilities.

The opposition, with Congress President Rahul Gandhi leading the charge, alleges that DRAL has – at the government’s behest – been illegitimately awarded the entire offsets liability of Rs 30,000 crore (Rs 300 billion).

While New Delhi, Paris and Dassault have denied influencing the French prime vendors to discharge their offsets through DRA, they have also indicated that DRAL has benefited from only a small share of the total offsets.

On Thursday, Dassault Aviation chief, Eric Trappier, told AFP in Paris that the offsets would be distributed between many Indian Offset Partners (IOPs), with DRAL getting just one-tenth of the total business.

Dassault Aviation’s website has posted a transcript of Trappier’s interview with AFP in which he states: “[DRAL’s Nagpur plant] should enable us to meet about 10 per cent of these offset obligations. We are in negotiations with about a hundred Indian companies and partnerships have already been concluded with about thirty of them.”

Ten per cent of the total offset value would amount to no more than Euro 390 million (Rs 33.12 billion). However, the Reliance Group itself has admitted it would benefit from offsets worth twice that amount. In a legal notice served in early September on a media house, Reliance Group indicated that it would benefit only from Dassault’s share of offsets, which amounted to Rs 6,600 crore (Rs 66 billion).

“Dassault’s share in the total offset Export Obligation (sic) is approximately 22 per cent, or Rs 6,600 Cr (Rs 66 billion)… The balance 78% of offsets are to be discharged by other companies such as Thales, Safran and MBDA, etc,” said the notice.

The notice did not touch on the question of whether Thales, Safran and MBDA would discharge any or all of their offsets through DRAL.

Another, far larger offset figure emerges from Reliance Group’s annual report for 2016-17, which states that DRAL would be a “key player” in executing offset obligations worth Rs 30,000 crore (Rs 300 billion).

“Reliance has formed a partnership with Dassault Aviation… through a joint venture (JV) company named Dassault Reliance Aerospace Limited (DRAL)… The JV Company will be a key player in the execution of offset obligation, including the entire Life Cycle Performance Based Logistics for the 36 fighter aircraft; valued at about INR 30,000 crore (Rs 300 billion). This is part of the purchase agreement between the Indian and French governments,” says the report in a section headed “Management Discussion and Analysis.”

Elsewhere, the report elaborates on the proposed Dhirubhai Ambani Aerospace Park, for which the Maharashtra government allotted land at the Multi Modal International Hub at Nagpur (MIHAN). To kick off this project, the [DRAL] Joint Venture shall facilitate the transfer of high end technology, while discharging offset obligations of INR 30,000 crore(Rs 300 billion). This is part of the agreement for purchase of 36 Rafale fighter aircraft for the Indian Air-Force. The scope includes Performance Based Logistics for Rafale aircraft of the Indian Air Force and other manufacturing activity.”

The “Letter to the Shareholders” also repeats this information in different words.

Interestingly, though, the Reliance Group’s Annual Report for 2017-18 has no mention of Dassault-related offsets.

Sources in Reliance Group, speaking anonymously, say that offset related production is still to begin and it will be years before there is any clarity on what value of offsets DRAL actually manages to discharge.
Posted by Broadsword at 08:28

Sir I fail to understand why make suggestive articles. Specially a person of your caliber and respect.
On the topic, why is it surprising if I say with the JV in place and Dassult interested, if they get the contract and with 30000 coming up in offsets, we can expect a good pie of it.

Why is this being twisted?

So why is the fact they Reliance is not infact getting 30000 crore surprising?

Wish to see more of you sir, but the one we know and respect.

Its very good article. It is very helpful us . Thankyou for sharing this great article.

Can we get a copy of the annual report of 2016-17 , only the page of "letter to the shareholders" will clear the air? I checked their website but nothing is mentioned related to the Rafale deal.

Go to BSE and search Reliance infrastructure limited then go to financial and download the Annual Report 2016-17. Refer page 7 , 44 and 52.

Here is the annual report of Reliance from BSE website: