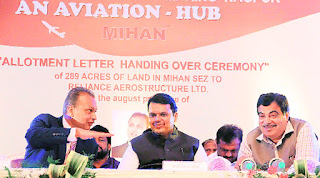 An embattled Reliance Group, accused by the Opposition of influence peddling in its selection by Dassault as its Indian offset partner, has rejected allegations that it has benefited from Rs 30,000 crore (Rs 300 billion) worth of offset orders. It says its offset business from Dassault will amount to just Rs 6,600 crore (Rs 66 billion).

Due to rupee devaluation, the original Rs 59,000 (Rs 590 billion) cost of the Rafale deal has already gone up to Rs 65,000 crore (Rs 650 billion), but most calculations are working off the old figure.

Now Reliance Group, in a legal notice served on six entities and individuals in connection with a panel debate on the Rafale, terms it “incorrect and misleading” to state that Reliance received all those offsets.

The notice says: “Dassault’s share in the total offset Export Obligation (sic) is approximately 22%, or Rs 6,600 Cr (Rs 66 billion)… The balance 78% of offsets are to be discharged by other companies such as Thales, Safran and MBDA, etc.”

Dassault is the prime vendor for the Rafale, but other “Tier-1” vendors supply major fighter assemblies. Thales provides avionics, such as radars and instrumentation, Safran supplies the Rafale’s twin M-88 turbojet engines and MBDA provides missiles and weaponry.

India’s offset guidelines, specified in the Defence Procurement Policy of 2016 (DPP-2016), provide for Tier-1 vendors like Thales, Safran and MBDA to discharge their own offset liabilities on a pro rata basis.

However, the clarification of the lower value of offsets is unlikely to satisfy the opposition. Its allegations of “crony capitalism” levelled at the government relate primarily to Dassault’s selection of Reliance Group as its prime offset partner, and the setting up of a joint venture firm, Dassault Reliance Aerospace Ltd (DRAL) to execute those offsets.

Spicing up allegations of a nexus between Dassault, the French government and the Reliance Group are recent revelations in the Indian Express that, even as the Rafale deal was being negotiated, another Reliance Group company, Reliance Entertainment, produced a film with French President Francois Hollande’s live-in partner, actress Julie Gayet.

Earlier, Reliance Group head, Anil Ambani, had written to Congress President Rahul Gandhi, stating that other companies were discharging the bulk of offsets. On August 20, Ambani wrote: “More than 100 medium, small and micro enterprise will participate in this along with public sector undertakings like BEL and Defence Research & Development Organization (DRDO).”

Offset obligations are to be discharged within a time frame that can extend beyond the period of the main procurement contract by a maximum of two years. This includes the period of warranty of the equipment being procured. Dassault has contracted to deliver the last of the 36 Rafales before April 2022, and the warranty contract (which ensures that minimum 75 per cent of the Rafale fleet must be operational at all times) extends for another five years, till April 2027. That means Dassault has till April 2029 – a period of almost 13 years – to discharge its offsets through the Reliance Group. Assuming full-scale delivery of manufactured items begins by next April, Reliance would have to manufacture and deliver Rs 660 crore (Rs 6.6 billion) worth of equipment each year.

Reliance Group and the government both argue that the OEM is free to choose the Indian offset partner to discharge offset obligations. While the DPP does indeed provide this flexibility, the defence ministry is required to vet the choice. Para 8.6 of the “offset guidelines” states: “All Offset proposals will be processed by the (MoD’s) Acquisition Manager and approved by Raksha Mantri, regardless of their value”.

Further, the DPP lays down detailed timelines for the vendor to submit his offset proposals for scrutiny. This is normally within twelve weeks of submitted the main proposal.

Reliance Group entities involved in defence are Reliance Infrastructure Ltd, Reliance Defence Ltd, Reliance Naval and Engineering Ltd (RNEL), and DRAL. Together, they have 35 industrial licenses for manufacturing various defence products. However, the biggest project in hand, RNEL’s fabrication of five naval offshore patrol vessels at its Pipavav shipyard, is running years late and in danger of penal action from the navy.

1.there must be some penalties on company in such deals where deadlines matter so much.(If the supply not fulfilled with in time promised.)
2.all international deals should be made to be declared in details,like we declare our each penny earned,at the end of fin.year or at the finalizing the deal by our govt.