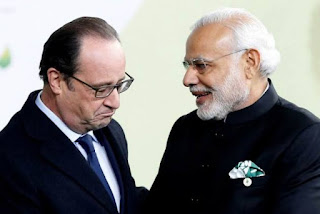 The government on Saturday rebutted former French president Francois Hollande’s explosive allegation that New Delhi had nominated Anil Ambani’s Reliance Group as the industrial partner in the purchase of 36 Rafale fighters from France.

“The Government has stated earlier and again reiterates that it had no role in the selection of Reliance Defence as the offset partner”, said a statement from India’s ministry of defence (MoD).

The rebuttal came even as the opposition Congress intensified its attack on the Narendra Modi government, citing Hollande’s claim.

The MoD statement starts by implying that Hollande was motivated by a “conflict of interest” relating to his personal life. “[His] reported statement perhaps needs to be seen in its full context – where the French media has raised issues of conflict of interest involving persons close to the former President,” it said.

The implied “conflict of interest” relates to The Reliance Group’s investment of Euro 1.6 million in 2016, in a film produced by Hollande’s partner, actress Julie Gayet. Bharatiya Janata Party (BJP) spokespersons have already taken the line that Hollande had falsely alleged that New Delhi had done Ambani a favour, in order to deflect charges that he had done the favour himself, as a quid pro quo for the financing extended to Gayet.

Late on Friday night, the French government issued its own carefully worded “denial”. Without explicitly contradicting Hollande, it stated: “The French government is in no manner involved in the choice of Indian industrial partners who have been, are being, or will be selected by French companies. In accordance with India’s acquisition procedure, French companies have the full freedom to choose the Indian partner companies that they consider to be the most relevant…”

French observers, speaking anonymously, point out that Paris had no choice but to issue a denial given the importance of India’s Rafale purchase for France’s aerospace industry. However, they underline its linguistic ambiguity. “The statement says Paris is not involved in selecting the Indian offset partner. This, in no way contradicts Hollande’s statement that New Delhi selected Ambani,” said one observer.

The second part of the French government statement that says: “In accordance with India’s acquisition procedure, French companies have the full freedom to choose the Indian partner companies…” is also a bland recitation of the procurement procedure. “This does not address Hollande’s implicit allegation that New Delhi violated its own acquisition procedure”, pointed out the observer.

Meanwhile, Dassault, which had refused to comment for the Mediapart report, has also issued a statement contradicting Hollande. “Dassault Aviation has decided to make a partnership with India's Reliance Group. This is Dassault Aviation's choice…” it said.

The MoD statement unusually cites “media reports” to argue that the Dassault-Reliance partnership was not related to the 36-Rafale purchase. Instead, it went back to 2012, when Dassault was competing in the tender for 126 medium multi-role combat aircraft (MMRCA).

“It has been reported that a JV (joint venture) between Reliance Defence and Dassault Aviation came into being in February, 2017.  This is a purely commercial arrangement between two private companies.  Incidentally, media reports of February 2012 suggest that Dassault Aviation, within two weeks of being declared the lowest bidder for procurement of 126 aircraft by the previous Government, had entered into a pact for partnership with Reliance Industries in defence sector.”

In its statement, Dassault cites Reliance Group’s ownership of land abutting a runway in Nagpur as a reason for deciding to partner Anil Ambani. “Dassault Aviation and Reliance have built a plant in Nagpur for manufacturing parts for Falcon and Rafale aircraft. The Nagpur site was chosen because of the availability of land with direct access to an airport runway, an essential condition of aeronautic activities”, said Dassault.

Reliance Group’s involvement in the Rafale controversy relates to its selection as one of Dassault’s offset partners. In all Indian defence procurements worth more than Rs 2,000 crore (Rs 20 billion), an offset policy requires the overseas vendor to plough back 50 per cent of the contract value into Indian defence production. Euro 3.9 billion worth of offsets arise from the Euro 7.8 billion contract for 36 Rafale fighters. However, The Reliance Group says it has benefited only from Euro 778 million worth of offsets orders from Dassault.

This latest twist in the Rafale controversy was triggered on Friday, when the well-regarded French investigative website, Mediapart, published an interview with Hollande, in which he said: “It was the Indian government that proposed this group (Reliance), and Dassault which negotiated with Ambani. We did not have a choice, we took the interlocutor who was given to us.”
Posted by Broadsword at 21:58

"In its statement, Dassault cites Reliance Group’s ownership of land abutting a runway in Nagpur as a reason for deciding to partner Anil Ambani"

For land! astounding that Dassault is helping to dig this pit deeper.

What’s the problem here? A lazy, non-performing PSU didn’t get offset contract. Right? Are you creating the jumla here to convince public that HAL would have been a better choice than a private player? Pathetic. No wonder India is a Third World country.

According to Modi Dassault's 12 aircraft per year delivery after 2022 is faster than HAL's 18 aircraft per year delivery? HAL already manufactured 70 Mirages of the same company Dassault and commissioned by IAF. Modi’s connections with Ambani and Adani are not a secret anymore in India. Why Modi took Anil Ambani along with him to Paris? Now Modi want everyone to believe that it was coincidental how Anil got the deal. It is very clear that if Modi could award 1000s of crores to his crony beda Ambani's non-existing educational institute, he scuttled Rafael deal to pump 10000s of crores to his crony chota Ambani. How he alone took all decisions by himself even without involving IAF to reduce the number of aircraft from 126 to 36? Why there was no re-tendering? Why he is afraid of JPC? All the circumstantial evidences tell us FEKU is the most stupid CHOR who closes his eyes and does robbery thinking darkness will protect him. In fact Modi proved his illiteracy too in this case.

Private player whose company is registered just few days before the announcement!!! Also, if PSU is non-performing then why to keep it up and running? Isn't it govt responsibility to turn such PSU? But here instead govt is killing the PSU.

Excellent Reporting sir. The Bhakts who worship the 56" must be worried now. The Moodi has turned out be very smart. He doesnt deal in millions but Billions of dollars. They can continue to hope that he may throw a scrap or two at them but he played the long game and instead of giving, took their money. This is a shameful act by Moodi. There was always a reason why a smart DM left the federal gov, the limelight and went back to Goa. He knows what Moodi and his cohorts pocketed and couldn't stomach it.

I hope 56" hasn't damaged the IA too much, after watching the COAS interview, instead of getting angry, I actually felt sorry for him. Here is a proud soldier, made impotent, told to put out a political message to try to save his master.

What are you smoking Anon@17.47? When was Mirage ever manufactured by HAL. It's only upgrading with the help. Of kits from Dassault. Just like your leader, you are just propagating falshood

Nobody can deny that Anil Ambani is a major beneficiary of the Rafale deal. Nobody can deny that the name of Reliance/Ambani is associated with corrupt business practices. Nobody can deny that Ambani is from Gujarat and so are Modi and Amit Shah. The controversy probably wouldn't have arisen had Dassault partnered with a company with better reputation like say Tata or Larsen & Toubro both of which have been involved in defence production for far longer than Reliance. The responses of NDA government to the allegations regarding Rafale arouse suspicion. Modi should have had the intelligence and foresight not to associate himself with controversial Gujarati businessmen like Ambani or Adani. This controversy will probably do to Modi in 2019 what Bofors did to Rajiv Gandhi in 1989.

@Dishkaeoon even that upgrade is ridiculously costly. The overall cost of upgrades is about $4 billion for 51 Mirage 2000 fighters. And this upgrade does not involve new engines.