Army chief to talk to top generals today, on restructuring the force 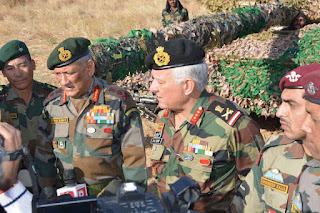 Army chief, General Bipin Rawat, will talk to his top generals – the seven army commanders, and his principal staff officers – on Tuesday here, seeking to bring them on board as he embarks on the most far-reaching personnel and organisational reforms the army has attempted since independence.

The defence ministry has already initiated a reduction of 57,000 personnel, including 30,000 civilian employees, in line with recommendations of the Shekatkar Committee. Now Rawat is courageously targeting the reduction of another 50,000 uniformed soldiers.

These include not just logistics and services personnel, but even manpower from infantry battalions – the basic fighting unit of the army and widely considered untouchable.

Confirming the process to Business Standard, Rawat stated: “The army has become 1.25 million strong and is continuing to expand. We spend 83 per cent of our budget on revenue expenditure, mainly salaries and pensions, which leaves just 17 per cent for modernisation. We have to cut down on manpower to make more for equipment.”

While Rawat is firmly in the saddle – he has been chief for over a year and a half and has as long to go, a tenure longer than any recent army chief – his proposed reforms cut so deeply into existing hierarchies and interest groups that buy-in from senior generals is essential. Without that, the proposals could be mired in endless discussions and counter proposals.

No formal proposals have yet been laid on the table. But the army is abuzz with speculation, because the “convening orders” of the three committees that will recommend reduction and reform measures, have been made public. Each committee is headed by a senior lieutenant general and deals with a separate area.

One committee, headed by the army’s “financial planning” chief, Lieutenant General Ajai Singh, will present proposals to cut down the size of army headquarters (AHQ). Rawat is known to believe that, over the years, AHQ has become bloated with non-essential appointments and departments.

Sources close to the chief say he has suggested to Singh to examine the feasibility of merging AHQ’s Military Training Directorate with the Simla-based Army Training Command (ARTRAC). Both organisations perform overlapping functions and there is believed to be scope for significant manpower reductions.

A second committee, headed by the army’s “perspective planning” chief, Lieutenant General Rajeshwar, will examine measures to eliminate unnecessary officer appointments, especially those that arose from the Ajai Vikram Singh Committee. In addition, Rawat has asked Rajeshwar to consider whether the large number of brigade, division and corps HQ can be pruned, saving on manpower needed to staff each HQ.

The third committee, headed by the Military Secretary, Lieutenant General JS Sandhu, will work on proposals to slash the authorization of officers, which currently amounts to almost 50,000. There is invariably a shortfall of 7,000-8,000 officers, and the belief in several quarters is that this is an artificial scarcity. This committee will examine whether the shortfall can be eliminated partly by reducing the officer authorization and partly by promoting more deserving soldiers to officer rank.

In Parliament in December 2017, the defence ministry stated that the strength of the army was 12.15 lakhs and that 49,932 officers were authorized. In addition, tens of thousands of civilian employees are paid from the army budget.

Interesting.
Cutting authorization to reduce deficiencies should look at role in war not peace

At last somebody attempting something good to cut flab...long overdue. Wish it does not die a premature death at the hands of govt officials who know how to make things go round n round...in perpetuity

All is well .. All is well.... our Army is such a beautiful organisation that it absorbs all shocks... and शौक़ of all Generals... they come and Go... they become governors and live there life in peace.... denting their own organisation.... draining it to the last drop of blood... stilll they never complaint.... The Govt has all the patience to absorb shocks of NPAs... losses due to corruptions.... Ghotalas....zero out put organisations in all ministeries and their salary burden.... but for ARMY the General Sahab is trying to show that we are a big fat belly.... and needs to be removed....dnt want to reduce the Aisho Araaam of self... but want to sort out everyone... because ARMY is trained to be obedient... In the name of infra structure development... Prime lands are been accessed by the bldrs so that they can earn big prices on their projects.... cant comment how many flats or row houses comitted by them to these newly budget concious people... There is shortage of houses for Jawans... there is shortage of their personel equipment even basics like water bottle helmets shoes... Rations are poor quality stuffs....there are so many marital desputes amongst the troops.... wintage equipment all second world war wintage... including the basic mobility of Army.... Amunition with which they have to fight war is old wintage and obselete... everybody is sleeping in their own capacity... and now in the name of reformation more resources are drained out from... is there any country in the world whose defence forces aare worried and reduce everything to fit thier requirements into the budget... We need Sir MANEKSHAW to be born again... what i foresee is INDIAN Troops will fight wars without amunition no doubt but Instead of questioning the Political Masters for their rights the Generals are killing their own organisation for thier self pitty goals for POLITICAL MASTERS....REAL SAD STATE.

This is not a good idea

Army chief is on self distruction mode

Why the General is not fighting with the MoD to reduce the strength of defence civilians, who are eating out almost 30% of defence budget.

excellent initiative by present COAS and GOI. long overdue...we cannot sustain such a large army given limited budget...even china can't and that is why they adjusted the numbers...focus should be on technology rather than number of boots on the ground...need of the hour is to have a lean fighting force equipped with the best weapons....such initiatives require courage and decision making.....if we don't change now then in 5 years we will have probably the 3rd largest defence budget with our economy still at the 5th or 4th position....and the capital expenditure will be at similar to present levels....

Ahhh! At last An RSS Chief bringing reforms.
This, for those not in the know, is our second RSS chief the first got into a muddle about the exact date of his birth.
Anyway Seig Heil, Seig Heil (one each to both our swayamsevaks)
This one is close to Gunslinger Doval and we in Nagpur always have great expectations from him.
Moving the Rashtriya Rifles HQ out of Delhi to J & K indeed! Expect a multitude of officers writing in to Nagpur raising objections, concerned about kids schooling!
AHQ will not be reduced in manpower - “fear not, nobody will be posted out”
This is all bluster! And it will pass.
We will all continue to live in Delhi
Amit Shah, or Modiji will not tolerate any of the braves or their families being uprooted.
Top priority is to keep Army bravehearts happy, and respect the hundreds of Martyrs killed in surgical strikes
Vande Mataram- Jai Shri Ram