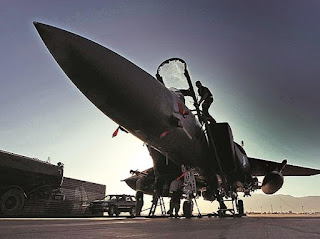 Traditionally, the government has measured defence allocations as a percentage of the Gross National Product (GNP), or as a share of total government spending. In recent years, the total defence budget, inclusive of pensions, has been slightly over 2 per cent of GDP and 16-18 per cent of government expenditure.

A defence ministry written response, tabled in Parliament on Wednesday, stated that the defence capital budget had already been increased from Rs 915.79 billion in 2017-18 to Rs 995.63 billion in the current year – a rise of 8.72 per cent.

Senior defence ministry officials have told Business Standard it is meaningless to evaluate defence spending as a percentage of GDP, since the bulk of that figure is in the informal economy and outside the tax pool.

These officials argue that defence revenue expenditure – with the bulk of it spent on salaries, pensions and running costs – is a fixed liability. Only in capital allocations does the government have the leeway to increase or decrease defence spending. And with the military already the highest recipient of capital expenditure, there is little scope for allocating significantly more.

Nor does the defence ministry believe there is an urgent need to allocate more money to defence modernisation. “There is adequate stocks of arms and ammunition with the Armed Forces who are well equipped for meeting any operational requirements,” said Bhambre, responding to anther question.

“In the last three financial years (2015-16 to 2017-18), 58 contracts worth about Rs 1,17,656 crore (Rs 1,176.56 billion) were signed with foreign vendors for procurement of defence capital equipment for defence forces,” said a defence ministry response, elaborating that these vendors are from Russia, Israel, USA and France.

A Business Standard analysis indicates that, while capital allocations to defence have held steady as a proportion of the national capital spend, defence allocations as a whole have declined over the last three years. From 17.8 per cent of government spending in 2016-17, defence was allocated 16.9 per cent last year and 16.6 per cent in the current fiscal. As a percentage of GDP, defence spending declined from 2.2 per cent to 2.16 per cent during the same period.

In Rupees crore: (Rs billion in brackets alongside)

What's with the random F-15 image?

Well spotted. With a cursory glance before jumping to the article, I (naturally) assumed it to be a Su-30. Good question. Why indeed.

Most of the capex is also spent on PSU, the in efficiencies show. We should bring back Arun Shourue as privatization minister , things will improve once he wields his scissors & axe.