In 1993-94, during a year with the United Nations Peacekeeping mission in Mozambique, I discovered that neighbouring South Africa was the ideal spot for rest and recreation. Those were heady days, when a new South Africa was born from the ashes of apartheid, delivered by that modern day Mahatma, Nelson Mandela. For us in Mozambique, there was a special connect: Mandela was the “special friend” of Graca Machel, the charismatic widow of the first Mozambican president, Samora Machel (they were later to marry).

So when my wife, Sonia, and ten-year-old, Meera, buttonholed me in March and demanded to know where we were travelling during the school vacation – “Not Kumaon again, Papa”, declared Meera, nose in air – it was with all the casualness of someone playing the Ace of Spades that I said: “Hmm… how about South Africa?”

In no time, our party expanded to include my niece, Mandakini, and her two children, Noor and Nishq, both about Meera’s age. None of us wanted to drag children about from place to place, so we decided to spend most of our vacation in Cape Town, at the southern edge of South Africa, rounded off by three days of wildlife watching at Kruger National Park, in the north.

Six of us, three adults and three children, landed at Cape Town on a cool afternoon after a pleasant flight on Ethiopian Airlines. At the airport, we picked up the seven-seat van we had pre-booked for our stay, and stocked up food supplies at the airport Woolworths. And then we set off on our hour-long drive to Simon’s Town, where some generous friends had offered to let us stay at their lovely seafront home. 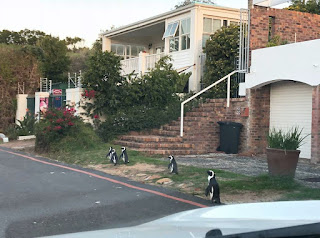 Simon’s Town, a quaint, one-street town, is home base to the South African navy. More importantly, it has the Boulder Beach Penguin Sanctuary: home to some 3,000 penguins. As we turned towards our new neighbourhood, we found penguins waddling along serenely, with little regard to cars and people. There is nothing quite as incredible as driving behind a penguin marching down the street, and the children in the car were hissing delightedly: “Don’t blow the horn, DON’T BLOW THE HORN.”

Over the next 12 days, we were to live with the braying sound characteristic of African penguins, which gave them the name of Jackass Penguins. Boulder Beach is a conservation miracle – in 1982, the penguin population had been reduced to just two pairs before strenuous recovery brought them back from the brink. Penguins are monogamous birds; their solicitousness towards their mates is a delight (“instructive” is the adjective my wife used, looking hard at me).
The kids were equally thrilled by the dassies -- cute, rabbit-sized mammals also called hyraxes – in the garden, though they came close to bloodshed over whether hyraxes are more closely related to marmots or elephants (the latter, surprisingly). 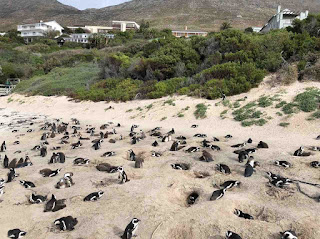 Our mornings often started with a dazzling sunrise (Africa does sunrises and sunsets with a blazing flamboyance that other continents fail to muster). Then we would go for a run along the sanctuary boardwalk and the beachside paths, watching carefully for nesting penguins. On rainy mornings, the droplets would trickle down our faces as we ran alongside the blue-grey ocean, flecked with white on those windy days. Noor and Meera decided that running in the rain was their favourite. Next would come breakfast, everyone participating in its preparation.

Our first major expedition was to Seal Island. This is a rocky sliver of land an hour by motorboat from Simon’s Town, where some 64,000 Cape Fur Seals – playful creatures that are referred to as “dogs of the ocean” – lie about sunning themselves. Intermittently they plop into the frothing waves and gambol around (sharks naturally consider Seal Island a great place to eat out). Seals are not big on personal hygiene, and their powerful bouquet inspired the children to rename the place Stink Island. 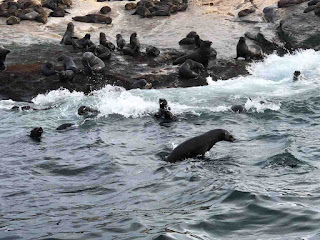 A special treat during the boat ride to Seal Island was a curious Bryde’s (pronounced Broo-dess) Whale, apparently interested in studying Indian children. It surfaced right next to us and then, for at least fifteen minutes, performed diving tricks; now circling, and now swimming directly beneath our boat, keeping the kids guessing where it would surface next.

Our next outing was the Cape of Good Hope, where Portuguese explorer Bartolomeu Dias landed in 1488 and established a direct trade route between Europe and India. Contrary to popular perception, this is not that southern tip of Africa, where the Indian and Atlantic Oceans meet – that is actually three hours’ drive away, at Cape Agulhas. But the Cape of Good Hope has captured the imagination of sailors and explorers, who refer to it as simply “the Cape”, below which lies the stormy Southern Ocean and then Antarctica. The Cape is part of the Table Mountain National Park, an extraordinarily biodiverse habitat. It offers a spectacular seascape of towering granite cliffs pounded endlessly by giant waves that have created local legends like the Flying Dutchman – a mythical galleon, crewed by tormented ghostly sailors that is doomed forever to beat its way through howling storms without ever managing to round the Cape. 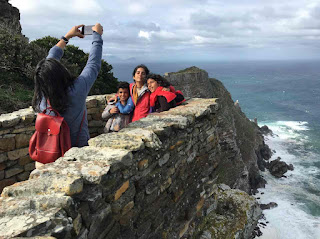 This was the only place we visited a second time – this time with the renowned naturalist, Craig Foster, who even the children recognised from the BBC serial, Blue Planet. Craig dives the Cape kelp forests regularly and his explanations of the local oceanic microenvironment left our collective jaws hanging.

Snorkelling in a (freezing) tidal pool at the Cape, Craig showed us an octopus, sea urchins and fish spawn. Watching us from the shore was a troop of Chacma baboons, led by a magnificent alpha-male, vicious and strong enough to take down a leopard. Meera had left the door of our car open and the baboon troop got inside, happily upending all our belongings before reluctantly concluding that nothing was edible. Not many kids have a Harry Potter volume autographed by baboon teeth marks. 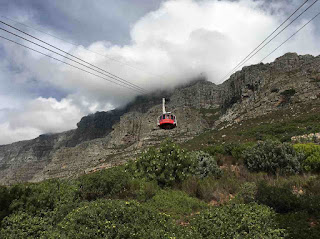 After all this, the iconic Table Mountain seemed a bit tame, but we could hardly visit Cape Town without going up there. We negotiated serpentine queues for the extraordinary cableway that ferries visitors up and down the mountain. The Table Mountain is naturally flat, but Meera and Nishq had an animated discussion about whether it had been flattened by the tourist hordes stomping around. 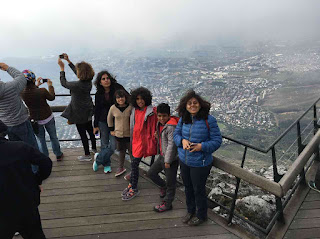 Finally, no trip to Cape Town is complete without visiting Robben Island, the apartheid-era prison where Mandela spent 18 of his 27 years in prison. Our tour guide, a woman from Mandela’s Xhosa tribe, described the ruthless, clinical efficiency with which the prison was run, calling to mind the Nazi death camps of World War II. Over coffee, she demonstrated to us the amazing Xhosa language, consisting of a range of tongue-clicks so complex that it takes Xhosa children at least five years to master. 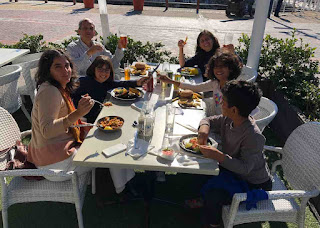 All too soon, it was time to move on to Kruger Park. As we drove out of Simon’s Town the African sky was lighting up in a high wattage sunrise. Watching us from the side of the road, six penguins lined up to bid farewell.

Visitors to Kruger Park usually fly in to Nelspruit airport, in the province of Mpumalanga. Sonia and Mandakini had booked us into the Umkumbe Lodge in the Sabi Sand game reserve, which many consider to be Africa’s premier reserve for viewing leopards. As it turned out, we were to see much more.

Game safaris take tourists to see the wildlife in open Land Rovers, modified with three rows of elevated seats that allow ten passengers uninterrupted views on all sides. A game ranger expertly drives one’s Land Rover and a tracker – expert on locating wildlife -- sits in a bucket seat welded to the front of the vehicle. The vehicles are connected on radio and when one encounters a leopard or lions, the others are quickly alerted to home in on that spot. 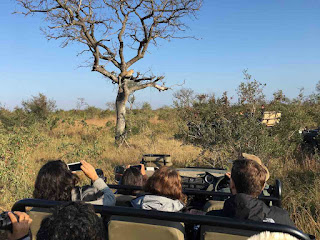 Our ranger, a six-foot-four, olive-green-clad youngster called Dani, turned out to be (or so the kids insist) the best guide in the world. While driving along twisty roads, through river beds and patches of forest, Dani regaled us with delightful tales about the creatures we encountered at every turn – zebras, wildebeest, giraffes, rhinos and, that omnipresent bird, the red-billed hornbill, immortalised as Zazu in Lion King. Then, the radio crackled into life and, after a quick conversation, Dani gunned the engine and we raced towards where a leopard had been spotted.

The thing with big cats is that, no matter how many photos one has seen, the real thing invariably reduces conversation to gasps. The one sitting on a tree before us was named The Angel because, as Dani pointed out, she was flawless – not a scar anywhere, not a spot out of place. The Angel was spectacularly unfazed by our gawping, looking away, yawning unconcernedly and then gliding down from the branch into the underbrush. 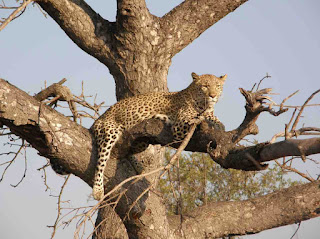 As darkness fell and a giant African moon rose in the east, it was time for sundowners. After parking the Land Rover in a clearing, Dani opened an icebox and served us the drinks we had pre-ordered at the lodge. Gin-and-tonics and whisky-sodas were quickly dispensed along with suitable beverages for the children. “That was the best part of the safari,” they chorused as we resumed patrol.

The night-time part of the safari was even more exciting, with the tracker playing a spotlight around the bushes to spot the night-dwellers. We witnessed a heart-rending drama in which a mongoose was avidly eating the bloody carcass of a baby hare, the mother watching helplessly. And then, a hyena arrived, intent on grabbing the carcass. But the mongoose was having none of it. It imitated the sound of a honey badger – an animal that even lions fear – and darted away, baby hare carcass in its bloodied mouth.

We returned to the lodge, tired and hungry, to a first class African dinner. After the kids had eaten their fill we were accompanied to our cottages by rangers. Unescorted night movement was strictly forbidden since wild animals could easily enter the lodge premises. The cottages were excellently furnished and the children especially loved the outdoor showers that adjoined the bathrooms. 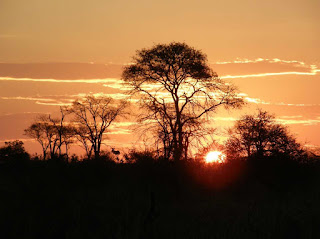 Over four safaris we saw pretty much every major African wild animal. Besides the Big Five (lions, leopards, rhinos, elephants and buffaloes) we were lucky to spot a honey badger and a pangolin – an animal so rarely seen that the rangers took selfies with it. Only on the last morning did we encounter lions, a group of seven young males that Dani said might go on to become Kruger Park’s most dominant lions. 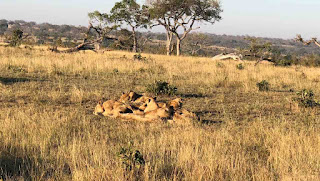 Boarding our flight to Johannesburg and then on to Delhi, the children chattered on about all they had seen and done over the preceding fortnight. We adults felt the smug glow of parents who have exposed their children to a worthy curriculum of zoology, history, anthropology and botany – but had a ball while doing it.
Posted by Broadsword at 09:19

Email ThisBlogThis!Share to TwitterShare to FacebookShare to Pinterest
Labels: Inside Tales, region

Enjoyed reading your blog. Will be back for more

What a lovely well written read - and beautifully presented too.
A wonderful family with on a South African adventure
A thrilling experience for them.

Sirji bahut achhe! And btw love your unhinged comments on t.v. Don’t hesitate to live on your own terms. Salute!