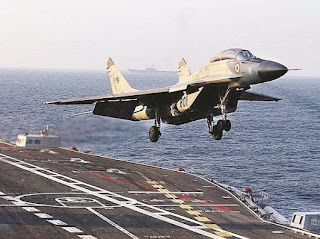 Import dependence remains a major problem even in indigenous weapons systems, with up to 40 per cent of the value of “Made in India” armaments accounted for by components sourced from abroad, said Secretary for Defence Production Ajay Kumar.

On Friday, addressing an Indian Air Force (IAF) – defence industry seminar in New Delhi, Kumar highlighted the scale of the problem. “Last year, the total production by defence PSUs (public sector undertakings) and OFB (Ordnance Factory Board) was about Rs 59,000 crore, of which Rs 138 billion (Rs 13,800 crore) was the value of imported components. That is roughly 24 per cent. But when we look at Hindustan Aeronautics Ltd (HAL), out of Rs 172 billion (Rs 17,200 crore) of production, Rs 70 billion (Rs 7,000 crore) was imported components -- nearly 40 per cent.”

The situation was even bleaker four years ago, said Kumar. “This 40 per cent [import content] today was 48 per cent in 2014-15. So we have been able to progressively reduce it. But significant work still needs to be done,” he said.

Air Marshal RKS Shera, the IAF’s maintenance chief stated that over 50,000 individual components had already been indigenised, or taken up for production by Indian industry. An additional 3,000 items are indigenised every year, but there are still another 80,000 components that can be built in India.

To address this problem, Kumar proposed a national effort to obtain three categories of technology, which would spur growth in aeronautical manufacture. First, India needed to leverage its position as the world’s fastest growing civil aviation market – with a demand of 850-1,000 civil airliners – to extract key technologies from vendors seeking to supply to India.

“Looking at our combined market size [of civil and defence aircraft] – and these engines will require maintenance, replacements etc. – we should lay down a roadmap for developing an aero engine manufacturing eco-system in the country”, said Kumar.

Kumar admitted this would not be possible without the government driving it.

This was precisely the strategy used by China, when it was the fastest growing market for airliners, to promote aerospace manufacture in that country. Beijing managed to arm-twist Airbus into establishing a production line in China, but it is still grappling with aero engine manufacture.

This again is a path that Beijing traversed while building its high-speed rail network. By making it compulsory for railway carriage manufacturers to set up shop in that country, Beijing obtained advanced materials technologies that it then adapted to aerospace and missile production.

Kumar’s third requirement is computer chip technology. “Whether it is a silicon chip, whether it is a LCD or LED chip, whether it is a gallium nitride chip, this constitutes most of the value that goes into the aircraft, or for that matter any defence platform. This has not just economic considerations, but also security and strategic aspects. As long as we are importing most of these chips, we are exposing ourselves to vulnerabilities that are not visible to the naked eye,” he said.

Setting up production of aero engines, high-tech materials and computer chips in India, however requires manufacture on a global scale, for which, the defence production secretary said he had “streamlined, rationalised and simplified” the export policy.

“No export request is pending for more than 30 days in the ministry. Repeat orders, do not require even 30 days, they are done literally across the table,” said Kumar.

Noting that start-ups would be central to high-tech defence innovation, Kumar said the IDEX (Innovations for Defence Excellence) scheme that Prime Minister Narendra Modi inaugurated in April would be unveiling its first set of “challenges and problem sets” to start-ups in Bengaluru on August 11. They would be required to present proposed solutions and the ministry would give up to one-and-a-half crore rupees to selected firms to develop prototype solutions.
Posted by Broadsword at 14:10


Ajay Kumar is the problem.
THE IAS ARE THE PROBLEM
ELIMINATE THESE CREATURES.
Set up Special Economic Zones (SEZs)
To be administered by the private sector officials
Appointed by the companies operating within the SEZs
KEEP THE IAS, OUT OF DECISION MAKING WITHIN THE SEZs
GOVERNMENT OF INDIA RULES DO NOT APPLY HERE
In areas of investment,
In pricing,
In taxation,
In housing,
In labor laws
In land management
Most foreign investments to be approved locally by SEZ officials without IAS
and require virtually no indian government clearance.
Offer many economic incentives to investors not available in the rest of India
Make Corporation Tax 10 percent for all enterprises in the SEZs.
All imported inputs used in exports or sold within the Zones are free of import duty and other indirect taxes THIS MUST BE be administered by SEZ officials not by Officials from government of India. No export clearance needed.
In addition, tax holidays available to foreign funded enterprises.
The SEZs must be fully Independent, administered like Singapore by the private sector, by officials who are experts, accountable and can be sacked for non performance.
THIS IS HOW A THOUSAND FLOWERS WILL BLOOM

The localization takes time and effort due to ability to manufacture low quantities, then ensure they pass certifications.
Dip by 8% is a very good achievement.
Chip manufacturing locally is a must. This is something as a natin We need to push.
One thing that is missed out here is additive manufacturing of 3D printing. We need to get into it big time.

One good thing about deals like Rafale is GoI has mandated offsets, rather than Screwdrivergiri in a PSU. This will ensure a wide spectrum of companies will benefit from up gradation of their manufacturing and quality process .

The problem with our govt., this one in particular is that we only talk...it's 100% propaganda. Because if someone is interested in actually improving the condition on ground, they won't be busy in making big announcements.....ALL THE TIME.

China doesn't talk, they act!
And the world talks about what they did....coz that govt. actually cares about their country as they don't have to worry about staying in power.

Unfortunately, our successive govts are only worried about staying in power and for that they need money to fight elections.

And defence deals were/are the best way of making money. It's the cash cow (one major reason why we are the biggest importers of defence equipment)
Earlier though hawala/ kickbacks, now through offsets.

Unfortunately that's how our democracy works.

The 40% of what we import directly is what is important, like all radars/sensors, Aeroengines, weapons, missiles.

We don't make anything substantial.

We just make the dabba around the aircraft, tank/ ship ...that too made with imported tech/ steel
(Licence produced)

Everything inside is assembled.

Its like a local computer shop which assembles PC from components sourced from different vendors and then claiming that he's made a computer, indegeneously.

Though the govt. Claims that we produce 60% stuff indegeneously...
The reality we all know.

And I hope we seriously improve. Had huge hopes from this govt. But unfortunately.... they haven't done anything great or different