How many soldiers in Kashmir? 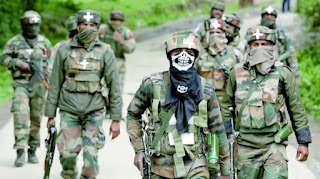 With Jammu & Kashmir (J&K) now under Governor’s Rule after the Bharatiya Janata Party withdrew support from the Peoples Democratic Party on June 19, there is the predictable talk about an unfettered security establishment unleashing “muscular counter-terrorist operations” to quash growing militancy in the state. To be sure, the army now faces significant challenges. It must secure the Amarnath Yatra – in which hundreds of thousands of pilgrims from across India undertake a three-day trek through the wild countryside to a Hindu shrine 4,000 feet high in the Himalayas. In addition, the security forces must re-establish their writ over the 16,000 square kilometre Kashmir valley, where such anger simmers that entire villages mobilise to pelt stones at security force units engaged in firefights with cornered militants. That does nothing to save the militants, kills stone-pelters in retaliatory fire, and leads to superstar funerals for dead militants in which even more youngsters take up the gun. There is also the continuing task of securing the 776-kilometre Line of Control (LoC) to prevent Pakistani ingress and militant infiltration, though that job has been eased since the two militaries agreed on May 29 to restore a badly frayed ceasefire.

Are there enough security forces in Kashmir to fulfil these tasks on an open-ended basis? Pakistani propaganda and Kashmiri human rights organisations, such as the influential J&K Coalition of Civil Society repeatedly state that India controls Kashmir by deploying 700,000 securitymen across the state. It is often alleged that half the Indian Army is based in J&K. It is bewildering why there has been no rebuttal or clarification of this issue from the central or state governments, or from the army itself? While sovereign governments need no permission to deploy their armed forces anywhere on their territory, it is surely sensible policy to avoid the impression that New Delhi holds Kashmir with a jackboot on its neck.

While assorted pieces of information are available in the public domain, there is real ambiguity around the troop numbers in J&K. There is the question of whether one is referring to Kashmir alone, where the militancy is focused, or to the entire state of J&K, which includes Jammu and Ladakh regions in addition to Kashmir. Then there is the confusion over the various categories of security forces mobilised to tackle an insurgency – regular army, Rashtriya Rifles, Central Armed Police Forces (CAPFs), state police forces and intelligence agencies. Finally, there is the question of whether to include soldiers and policemen deployed south of Jammu, on the settled international border, which is similar in many respects to the India-Pakistan border in, say, Punjab or Rajasthan. Let us try to disaggregate these figures.

There is, first, the Indian Army itself. It includes the regular army formations that defend the LoC from Pakistani military intrusion and also form a counter-infiltration grid to prevent militant ingress and egress. It is known that Kashmir, Jammu and Ladakh are each defended by two regular infantry divisions, with about 20-30,000 troops in each. It must be remembered that, of the two divisions stationed in Ladakh, much of one – 3 Infantry Division – defends the Line of Actual Control (LAC) with China. Even so, since it also holds the Siachen Glacier, its numbers must be included in our calculation. However, we must exclude two divisions deployed on the international boundary between Jammu and Punjab, which man an uncontested border and have no role in counterinsurgency. That adds up to 150,000 regular army soldiers deployed in J&K.


The other army presence in J&K, the Rashtriya Rifles, consists of 60 battalions, with about a thousand soldiers in each. It is manned by the army, but is a specialised counter-insurgency force, equipped with only light weapons. It is divided equally across the Kashmir and Jammu hinterland, controlling villages but staying out of big towns and cities. Since there is no insurgency in Ladakh, there is no Rashtriya Rifles there. Along with the regular army formations, that takes the number of army soldiers in J&K to 210,000, a little more than one-sixth of the Indian Army’s authorisation of 1,215,049 soldiers. To say that half the army is deployed in J&K is pure delusion.

* Includes regular army manning the Line of Control (LoC) and counter-infiltration grid. Excludes 26th and 29th Infantry Divisions that defend the international boundary south of Jammu, and are not employed in counter-insurgency tasks

#  Figures from Census 2011, with 7 per cent added for estimated growth since then, at 1 per cent annually.

Then there are the CAPFs, which include the Central Armed Police Force (CRPF), the Border Security Force (BSF) and the Indo-Tibet Border Police (ITBP). The CRPF and BSF have the thankless job of working alongside the state police to maintain law and order in the larger towns and cities of J&K. They number about 60,000 troopers in Kashmir, about 40,000 in Jammu. Meanwhile some 30,000 ITBP border guards deploy on the LAC with China in Ladakh. All told, they add up to 130,000 central policemen.

Finally, the J&K Police, along with the J&K Armed Police, special police officers (SPOs) and intelligence agencies, number about 130,000 personnel. Over the years, the J&K Police has grown in both numbers and capabilities and, today, forms the cutting edge of counter-insurgency operations. From almost zero capability at the start of the insurgency in 1989, the J&K Police is arguably today the most capable state police force in the country.

That adds up to a total of 470,000 security personnel, including the state police force. Visitors to Kashmir often remark on the “overwhelming security presence” on the streets, but what is the reality in the context of international counter-insurgency norms? The US military’s counterinsurgency doctrine, based on its experience in Afghanistan and Iraq, recommends a force level of 20 security personnel for every thousand local people in the operational zone. In both Kashmir and Jammu, we comfortably surpass that number – with 28.5 and 36 soldiers respectively. One reason for that is that, in addition to counterinsurgency, troops are also engaged in protecting a porous border. The figure in Ladakh is off the charts, because its two districts – Leh and Kargil – are amongst those with India’s lowest population density.

It is hard to tell whether, even with these numbers, the army is succeeding in its aims. The number of armed militants killed has steadily increased: from 150 in 2016, to 213 in 2017, to 92 already this year. But that could be a consequence of growing militant numbers, which indicates failure alongside success. Furthermore, the army is paying a continuing price, with 63 fatalities in 2016, 62 last year and an alarming 46 already this year. If the National Security Advisor’s so-called “Doval Doctrine” has (sensibly) shifted tack from confronting Pakistan to implementing a real ceasefire on the LoC, it is worth considering whether it is also time to cool the temperature inside Kashmir. India’s preponderance of force can keep the lid on militancy. But, without a political initiative to address grievances, the pot will continue to simmer.
Posted by Broadsword at 06:54

The article doesn't make any sense. What exactly were you trying to say? Are you taking the line io the separatists? Can you combine the deployment in border and inland and say that the deployment is on higher side