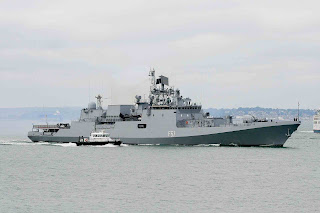 INS Trikand, one of the six Krivak III frigates bought by the Indian Navy, which is negotiating for four more

A contract with Russia for four Grigorivitch-class frigates, urgently needed by the Indian Navy, is being delayed by the high cost of building two of them in Goa Shipyard Ltd (GSL), as the defence ministry insists.

New Delhi and Moscow have agreed terms for the first two frigates, which are lying almost fully built in Yantar Shipyard in Kaliningrad, Russia. For those, New Delhi has negotiated an attractive price of under $1 billion (Rs 6,850 crore) – or Rs 3,425 crore each.

Those two frigates could be delivered quickly to India, as soon as they are fitted with Ukrainian Zorya gas turbine engines. After Russia annexed the Crimea in 2014, Ukraine cut off defence supplies to Moscow, but has agreed to route the Zorya turbines via India.

But delivery of those two frigates is held up by prolonged negotiations over the high cost of building the remaining two vessels in Goa. Like all foreign weaponry built in India, this will add on costs such as technology transfer, transhipping raw materials and systems from Russia to Goa, establishing building infrastructure in GSL and indigenising parts of the warship.

With GSL never having built a warship as large and complex as a frigate, the time it will take to build two frigates would almost certainly escalate the cost further.

New Delhi officially recognised this problem on Friday, when Defence Minister Nirmala Sitharaman revealed that a defence ministry committee is examining why defence public sector undertakings (DPSUs) charge so much for their products.

Asked by Business Standard about building the Grigorivitch-class in Goa, Sitharaman admitted that GSL’s cost of production would be significantly higher than Yantar’s.

To compare, the Indian Navy will pay Mazagon Dock Ltd, Mumbai (MDL) and Garden Reach Shipbuilders & Engineers, Kolkata (GRSE) about Rs 6,483 crore for each of seven Project 17-A frigates that will soon go into production. That is almost double Yantar’s Rs 3,425 crore price for each Grigorivich-class vessel.

To be sure, the 4,000-tonne Grigorivich-class frigates – also known internationally as the Krivak III class, and in Russia as Project 1135.6 – are smaller than the 5,600 tonne frigates of Project 17-A, and therefore cheaper to build. But they are as heavily armed and will carry the same BrahMos anti-ship missiles, AK 630 close in weapon system and heavy torpedo tubes supplied by Indian firm, Larsen & Toubro.

With four Grigorivich-class vessels lying fully, or partially, built in Yantar shipyard, there are questions over why India is accepting both delay and a significantly higher price, by stipulating the building of two frigates in India.

Indian admirals point out that the navy is making do with just 132 warships against the requirement of 198 vessels spelt out in its Maritime Capability Perspective Plan. Even more worryingly, the navy has just 15 frigates in service against the 24 it calculates it needs.

Modern frigates are multi-role warships in the 3,500-6,000 tonne range that can engage targets underwater, on the surface, inland and in the air. “Frigates are a navy’s workhorses. To fulfil the Indian Navy’s operational roles of anti-piracy, area domination and port visits, we simply cannot afford to be nine frigates short,” says a senior naval planner.

The navy already operates six Project 1135.6 frigates, which it calls the Talwar-class after the lead vessel, INS Talwar. Inducted into service between 2003-13, these were the navy’s first ships built with a stealthy design and equipped with a vertical launch system for missiles.

Naval officers praise the Talwar-class frigate. “Its space utilisation is outstanding, packing a large amount of weaponry into a relatively small warship,” says a serving officer.

Over the years, Russian vendors have supplied over $100 million worth of spare parts and back-up support for the first six Krivak-class vessels: INS Talwar, Trishul, Tabar, Teg, Tarkash and Trikand.

India ordered the first three frigates in the late 1990s, when the Russian economy had flat-lined, the bankrupt Russian military was placing no orders, and the shipbuilding industry was dying. It was an infusion of capital that revived Russian shipbuilding.

The current negotiations for four frigates follows an inter-governmental agreement signed in March 2016. In March 2017, New Delhi decided that the first two vessels would be built in Yantar and GSL would build the remaining two.

Invariably, Make in India will have a cost and the navy will have to bear that if it insists on building indigenously. “Russia would be happy to provide all four frigates fully built for under $2 billion,” says an industry expert in Russia.
Posted by Broadsword at 20:24

Well, all this makes sense when you recall where the previous Raksha Mantri came from..

Just shows in efficient india PSU are. This is exactly what went wrong with MMRCA and HAL deal last year.
We should stop to distinguish between Public and private companies.

Take four Frigates for $2 billions and try to build their copies in future at a company that will produce them competitively...


I remember that we build Shivalik class Destroyers that contain two helicopters in India itself...
If so why not build them and improve Indian warship building capabilities?

The cost of capability creation at GSL and it's Indian vendors should be amortized over the long term on the basis of multiple warship orders of various classes to come, and not added on to the price of a small number of warships to be built in the short term E.g. these two frigates. This is normal practice in any sensible industrial system. Perhaps the baboos of the MoD are unschooled in modern economics. So also the cost of indigenizing the Krivak III design (i.e. transferring technology to GSL and to Indian vendors) makes sense only if the Indian Navy intends to order many more warships of this class in the future. The main thing to try to acquire as far as the Krivak III goes is the design expertise (packing so much heavy weaponry in a relatively small hull) - which is a matter of training designers at the Directorate of Naval Design and MDL. Otherwise there is no gain because the Indian yards such as MDL already have the technology to build sophisticated ships such as the Kolkata class. Pursuing this type of piece-meal 'Make in India' is stupid.... but no one in the government (assuming they realize it) has the courage to point it out. Blind repetition of the Make in India mantra is the game, damn the delay and cost to the nation.