After Rafale splurge, a sensible Jaguar upgrade (a two-part report) 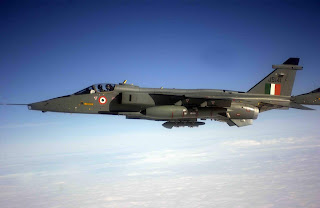 The Indian Air Force (IAF), after being criticised for spending $9.2 billion on 36 Rafale fighter aircraft, is closing in on a far more prudent deal – the rejuvenation of 80 ageing Jaguar fighters into highly capable, multi-role, combat aircraft for a mere $1.5 billion or so.

For a decade, the Jaguar upgrade proposal has remained stalled on the issue of cost. Honeywell was made responsible for “re-engining” the Jaguar, and the US firm quoted an unacceptable $2.5-3 billion for taking full responsibility for installing its new F-125IN engines in 80 Jaguars.

But now, breaking that logjam, Hindustan Aeronautics Ltd (HAL) has been nominated the lead integrator, while Honeywell has stepped back to the more restricted role of engine supplier. HAL will buy F-125IN engines from Honeywell and install them in the Jaguars, replacing the current Rolls-Royce Adour 811 engines.

HAL chief, T Suvarna Raju, claims his company can do the job more easily, and cheaply, than Honeywell, having built more than 145 Jaguars under license over the years. “Installing the F-125IN requires 10-12 relatively minor modifications. HAL can handle this easily”, he said.

“The earlier tender stands withdrawn. In its place, HAL will take a quote from Honeywell for its engines and, after adding its own expenses, submit a ‘total project cost’. Based on that figure, the defence ministry will sanction the project. The contract will now be between the IAF and HAL”, said Raju.

The HAL chief says there will be no time-consuming competitive tendering, since Honeywell is the only vendor. Rolls-Royce has declined to participate, since they do not have an engine that meets the IAF’s specifications for the Jaguar.

Honeywell will require 36 months for the F-125IN engines to start rolling off the production line, but HAL wants to go ahead with engine integration, using two engines that Honeywell had built earlier when it was to have the lead role.

Raju says he recently travelled to Honeywell’s facility in Phoenix, Arizona to “ensure that we benefit from several years of work they have already done on integrating the F-125IN onto the Jaguar. We need to cut down on time and expense, and avoid re-inventing the wheel”, he points out.

Besides building two F-125 engines, Honeywell also bought a Jaguar airframe from the UK to integrate them on to. It remains to be seen whether the US firm will cooperate with HAL for mutual benefit, or demand financial compensation for the work it did earlier.

The first indicator, say defence ministry sources, will be the terms that Honeywell demands for supplying two engines to HAL – sale, rent, lease or gratis.

Of the 145 Jaguars that HAL built for the IAF, only 119 are currently flying, comprising six IAF squadrons of about 20 fighters each. Since 39 of these would complete their airframe lives by 2025-30, the IAF considers it uneconomical to re-engine these. That leaves 80 Jaguars, whose service lives would be extended to 2035-40 with new engines.

With each of those fighters requiring two engines, and an additional maintenance reserve of 40 engines, HAL would require 200 F-125IN engines from Honeywell. Aerospace industry experts estimate a price of $5-6 million per engine, which would place Honeywell’s bill at a little over a billion dollars. The remaining cost would be incurred in integrating the engines onto the fleet.

With engine supply starting only three years from the contract date, substantial numbers of re-engined Jaguars would probably materialize only after five years, i.e. around 2024.

IAF pilots joke that the Jaguar’s current engines are so underpowered that the fighter only gets airborne because the earth is round – and its curvature makes the ground drop away beneath the moving aircraft. With the Rolls-Royce Adour 811 engines output (25 kiloNewtons of dry thrust and 37.5 kN with afterburners) being replaced by the F-125IN (27.7 kN of dry thrust and 43.8kN with afterburners), Jaguar pilots believe they would have the last laugh.

(Next: New Jaguar avionics to give lethal combat edge)
Posted by Broadsword at 10:29

Why not explore Govt GTRE GTX35 for the same? Is it not right fit... Can any Aero Expert in this blog do one Analysis that may help understand if it fits or not.

This long-delayed project, which was resurrected last month, involves replacing the Jaguar’s underpowered engines.
This is another red herring; like the RFP for 126 fighters. And it can be confirmed to be so on the double, given that it involves a US manufacturer. How will the GoI justify this contract given that the Americans are back to their old sanctioning self with India? On the Rafale, most defence commentators continue to misinterpret it as a purchase when the deal is in fact a journey interspersed with numerous milestones along the way for a nascent domestic aerospace industry. Rafale will enter the IAF in numbers, with increased domestic content over time and ultimately help eject the Russians out of the IAF. Geopolitically too, it makes sense for a rising power like India to make common cause with a middle power like France, with whom it has no frictions than seek the friendship of a major power like the US, who'll seek to subjugate or like Russia, with who India has very little, if any, in common.

1. why keep Jagaur jets for maritime strike role, this job can be done by Mig 29k jets

2. removing them from maritime strike role will give IAF more Jaguars as deep strike jets

IAF pilots joke that the Jaguar’s current engines are so underpowered that the fighter only gets airborne because the earth is round – and its curvature makes the ground drop away beneath the moving aircraft.
Ha ha ha......the IAF Pilots surely know the criticality of take off weight; their own selection was made possible thanks to their unique anatomy which spared them the additional dead weight of a cranium and the biological matter associated with it.


Finally........I remember reading a Report by you on this issue a couple of years ago !!

HAL is underestimating or simply lying to get this contract. It’s very difficult to install a new engine without significant modifications in airframe. Higher weight also necessitates adjustments to COG etc. Seems like another project to nowhere for HAL. May be Honeywell is showing honey to HAL directors to make them buy expensive engines just like Saturn of Russia did for IJT Sitara- AI-55I engines are rusting at HAL since 2009!
Jaguars are old and out of active duty from everywhere except India and Oman. There isn’t much to gain by adding brand new engine to airframes with 15 years max! Due to its design limitations, Jaguar cannot win a dogfight with any multirole aircraft even with new engine and ASRAAM.

What happened to HTFE 25 and did someone try to develop after burning version of the same and test it quickly and fit one engine in Jaguars , the older versions and try it out, simultaneously develop HTFE 40 and install 1 engine in jaguar and then develop the after burning version and jaguar would be a winner . It can dogfight F 16 the versions which Pakistan. You can easily 4 maybe 5 squadrons till AMCA arrives. I feel if they really fit F 125 engine then all this make in india is useless exercise. They should try HTFE 25 engine immediately now and advance. If they don’t succeed first time the plane without any load with less than half fuel can land back on one engine.

I feel there is something horribly wrong and there is incoardination in different agencies. No one is their to priorities the need and it I had full powers I would take a DO 228 and attach the engine on the dorsal surface and test it in a month. If it succeeds then fit one in jaguar and then in HJT 36 and immediately at top priority develop H TFE 40 and fit it’s it is test it as it would produce dry thrust equal to the wet thrust developed by Adour 811. I would add after burning version later as and when it gets fully devoted. I would use HTFE 25 extensive in two engine conjugation on Saras and test it extensively . If some one gives just 200 million and 20 good engineers I would do it for jaguar and make it operational in less than 3 years.
That way you get engine for HJT 36 , jaguar , hawk , and for civilian aircrafts.
TIMBAKTOO

Mig 29 is designed as air 2 air fighter and is great at its job. But it cant carry heavy ordnance.

Mig 29k is just a naval variant of the same aircraft with some modifications on its lower body to make it durable for carrier landings. Navy only intends to use it as a fleet air defence role with the naval ships in the fleet doing surface attacks.

F18 or rafale M are different they have reasonable air to air capability and can carry heavy ordnance too.

Anti ship missles are heavy as they carry lot of fuel to reach and explosive to destroy a huge warship.

Hence in India which focusses only in our surroundings IAF jets can launchbfrom land and attack enemy naval vessels. The jaguar is a 'deep'strike aircraft. Its designed for A2G role and its weak engine make it great for range and load carrying capacity. So its the best air craft to be used as a anti ship missile taxi in the indian ocean. It will fly low and slow where no radar can catch it. On its way back it can be protected by other fighters (mig 29k or something else)

Will a 10% increase in dry thrust from 25 kN to 27.7 kN really change the performance of the Jaguar phenomenally, so much so that it will change the perception of the pilots who joked that "Jaguar’s current engines are so underpowered that the fighter only gets airborne because the earth is round"? That increase in thrust doesn't sound like a convincing improvement to me. I would request experts in the field to share how much that will translate in to real world performance and by what quantifiable margin like increase in maximum take off weight, speed of climb, service ceiling, speed of the plane etc.

Another proof that IAF usually extracts the last bit of juice from all its assets.
We simply curse them for buying Rafale ! See they will be flying Rafale even on 2055 !
Hope they get another 72 of them.

Buying US stuff is dangerous. Look at their latest rules for sanctions on russian and Iranian .

HAL will do anything if some money is shown, I hope they can do these engine changes properly.

To that extent it would have been better to choose RR Mk871, even if a little inferior.
Any technical comparison of the two, Mk871 and F125IN ?