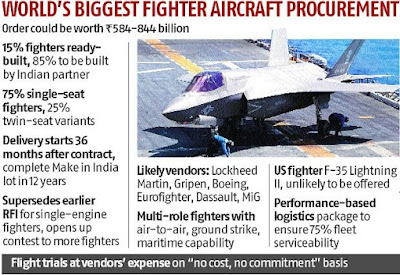 Both single- and twin-engine fighters are eligible; a re-run of the MMRCA is on the cards

The Indian Air Force (IAF) on Friday initiated the procurement of 110 fighter aircraft for its depleted combat force – now languishing at 31 fighter squadrons against a desired strength of 42 squadrons. When in service, these fighters will fill six squadrons.

A “Request for Information” (RFI) posted on the IAF website called for proposals for supplying 110 fighters, of which 75 per cent (82-83 fighters) would be single-seat aircrafts, while the remaining 27-28 fighters would be twin-seat variants.

The RFI requires no more than 15 per cent of the order – or 16-17 fighters – to be supplied in “flyaway”, or fully built state. The remaining 93-94 aircraft must be built in India by a “Strategic Partner/Indian Production Agency (SP/IPA)”.

Vendors have three months to respond to the RFI. That will be followed by a process – which in the past has lasted several years – of issuing a formal tender, carrying out technical and flying trials, evaluating costs and then negotiating a final price with the winning vendor.

In an expansive definition of capabilities, the IAF stated: “The aircraft are intended as day and night capable, all weather multi-role combat aircraft.” They must be capable of beating enemy aircraft in air-to-air combat, striking ground targets, reconnaissance, electronic warfare and air-to-air refuelling. The fighters must be capable of maritime strike, i.e. destroying targets far out to sea.

The current RFI supersedes an earlier inquiry the IAF issued in October 2016 for buying and building 100-200 single-engine fighters. The single-engine stipulation had effectively reduced the acquisition to a two-way contest between Lockheed Martin’s F-16 Block 70 and Swedish company, Saab’s, Gripen E.

Now, with twin-engine fighters eligible, several other vendors can participate.

This IAF procurement could crystallize on lines similar to the ultimately unsuccessful attempt, initiated in 2007 and abandoned in 2015, to procure 126 so-called “medium, multi-role combat aircraft” (MMRCA) for some Rs 420 billion.

“No major new fighters have emerged in the last decade, other than the American F-35 Lightning II, which is unlikely to be on offer. That means we will broadly see a repeat of the MMRCA contest”, says an executive with a major global aerospace firm.

However, Air Marshal Nirdosh Tyagi, who played a central role in the MMRCA process, differs. “Global vendors are now aware of the stringency of Indian weapons procurement. In the MMRCA tender, vendors promised capabilities that were still under development, not realising that would result in their rejection. This time, vendors are likely to be far more careful”, Tyagi said.

Furthermore, a decade ago, several vendors were still developing the “airborne electronically scanned array” (AESA) radars, which was a key capability the IAF wanted. This time, several vendors have AESA radars integrated onto their fighters.

Another difference from the 2007 MMRCA tender was that Hindustan Aeronautics Ltd (HAL) was to be transferred technology for building most of the fighters in India. In the current tender, private sector companies have been encouraged to build the fighters.

The RFI emphasises the need for significant transfer of technology (ToT) to build the fighter in India It requires the vendor to “specify scope, depth and range of ToT and key technologies which would be shared with its SP/IPA in India.”

The vendor, along with the Indian SP/IPA, is required to propose a “performance based logistics” (PBL) package to ensure that 75 per cent of the fighter fleet remains serviceable at all times, with each fighter flying 150 hours every year, for ten years.

Vendors are required to indicate approximate costing of the aircraft, all its associated costs, a “comprehensive maintenance cost” including PBL costs for ten years and cost of obsolescence management, i.e. to ensure spares and components remain available through the service life of the fighter.

In a stipulation that will not go down well with vendors, they must acquiesce to field evaluation trials on a “no-cost, no-commitment” basis, i.e. at their own cost. Vendors still complain about spending $40-50 million on the MMRCA trials, which ended without the IAF buying a single aircraft.

Instead, all that materialised was the purchase of 36 Rafale fighters in a government-to-government arrangement with France, announced by Prime Minister Narendra Modi in Paris on April 10, 2015. In June 2016, the IAF signed in a Euro 7.8 billion contract with Dassault that requires Rafale deliveries to commence in June 2019.

Alongside the current RFI, the navy is pursuing another inquiry, issued on January 25, 2017 for “approximately 57” multi-role carrier borne fighters for the three aircraft carriers it will eventually operate. That RFI too is silent on whether the navy wants a single-engine or a twin-engine fighter. However, the capabilities demanded biases the selection in favour of a medium-to-heavy, twin-engine fighter.
Posted by Broadsword at 07:57

The previous poster is quite right, I entirely agree.
India will need a large number of F35 aircraft or equivalent fifth generation, as a viable deterrent to future J20 fighters from China.
A cost beyond the economic resources of our country.
The J-20 will cost China only $20 million each and will be deployed in their hundreds. China has the ability to manufacture five J20, to Indias cost for the purchase of one US F35.
The Chinese J20 aircraft has the potential to alter the regional balance in Asia by rendering nearly all present regional air defence systems ineffective.
All of India’s present vintage aircraft have the potential to be shot down, before they can see or come close to the future re-engined, stealth advanced Chinese J20.
I do not exaggerate by stating that In ten years time the bulk of the present fighter aircraft with the IAF will be fit only for the scrap heap and that includes the Teja. The Indian public through the media must be made aware that the IAF fighter jets are aged and antiquated. This is exacerbated by India's obsolete and almost non existent air defence.
Journalists like Broadsword must inform their readers that a future War with China must not be allowed to happen it could be fatal. We must accommodate ourselves to this new reality. Absurd Incidents like the Doklam and stupid Jingoism must stop.
War with China must be avoided by economic inter dependency with their economy and diplomacy. Our country faces other more immediate vulnerabilities to its security.
A tinderbox situation is developing with widespread hate songs, rally and hate speech against our minority population. In the Hindi belt the atmosphere is uncannily similar to that prevailing in the immediate years before the Rwandan genocide against the Tutsi.
What would happen if in retaliation to a massive Godhra type incident, the fascist forces unleash their million strong hate indoctrinated militia against our Muslim population. This type of genocide with the resultant insurgency in the aftermath will invite outside intervention.
Indias demographic crises, the inability to offer jobs to millions of youth entering the jobs market in the next decade is also a cause of concern.
We have a crises of education in India, there is no jobs for Indias future young. These disgruntled youth will create instability,.
It’s obscene to spent billions on fighter aircraft with Indias other pressing priorities.
Therefor I agree with the wisdom of the previous poster who calls for ‘zero war’ we can only win by not fighting/avoiding war with China.

The best way to stop war is to become strong, nobody picks a fight they can't win.

How many fifth generation aircraft India can afford to import???
By 2035 China proposes three thousand J20 for PLAAF use.
This will exceed the fifteen hundred F35 to be purchased by the US forces about 40% of Lockheed Martin F35 production.
Contrast the 3000 Chinese J20 with the relative tiny number of 100 F35 India is exploring purchasing, and these aircraft if purchased will operational with the IAF only after 2030.
Considering this eventual large disparity in numbers, China’s PLAAF will achieve Air superiority over the Indian skies very quickly.
Pakistan will be equipped with the J20 but the number is still unknown.
Ironing out the J20 engine trouble and enhanced stealth will be done long before 2030. Revving up J-20 production to a very large scale requires quality-control hurdles which will take time but will be done well within the next ten years.
Also i must say, Given the large number of customers for the F35 Lockheed Martin and the waiting list,
The lack of a fifth generation competititor supplier for the Indians, I guess Lockheed Martin will not bend over backwards to accommodate a F35 production line in India as demanded or Lockheed will make India pay through the nose for the privilege.

IAF and GOI won't be third time lucky for the following reasons:
1.) Opposition has already called it a scam today a day after RFI was released
2.) HAL is not involved so they will cry and again opposition and journalists like you will blame GOI for crony capitalism
3.) Rafale will emerge winner and will be way over budget!!
4.) GOI and ministers will change next year so it will just be time pass and speculations for next 12 months. even if same GOI and minister comes in they won't be able to close the deal in 5 years time as previously it took 7+ years without any success

Best would have been if the global OEM's boycott this tamasha and nonsense. IAF will never buy Mig's so they have no chance. f-16/18' will close their resp production line in the next 2 years time so they are out before the start itself. Eurofighter also doesn't have any future. That leaves IAF favourite Rafale and Gripen. No competition here as Rafale will win hands down since this is no longer light fighter but MMRCA.

Why does MoD give 3 months time for RFI response?? What info they need that they do not already have!! If they meant business and wanted to make it short they could have gone for RFP straightaway.

We have proved to the whole world that we are the only large AF which does not know what it wants and does not know how to close a contract!! happy flying and testing the aircraft's as anyways they won't don the IAF colours!!!!

Same old palaver again! It seem the IAF will not rest till it gets the F35. IAF's dreams of having a 40 Sqn AF is not going to happen anytime soon. IMO defence minister and IAF should focus on getting LCA (whichever mark) in decent numbers, accelerate the development of AMCA and FGFA with russia. Whilst I do understand the importance of air superiority. The effect of sheer numbers should not be underestimated. I'm just a armchair pilot happy to be corrected! S K

If the value of the current deal is USD 9-13 billion. Then they should have gone ahead with Rafael which had won the fighter contest. Whats the point of buying 36 jets for USD 8 billion and then float another tender for 110 jets.

@Ajay would love to hear you on what the logic is?

Doklam is still work in progress....

What is it that forces us to cancel the old tender and evaluate the same short listed war planes all over again...


Will we waste another 10 years in RFP RFQ BUSINESS

It does seem a truly bizarre situation