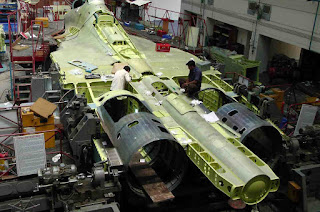 Even so, company sources told Business Standard they are concerned about HAL’s dwindling order book, with the Sukhoi-30MKI production line at Nashik – its main cash cow – having almost completed delivery of the 222 fighters ordered by the Indian Air Force (IAF).

Priced at over Rs 500 crore each, HAL has barely 30-32 Sukhoi-30s left to build, and those will be delivered by 2020-end. With little progress on the India-Russia proposal to develop, and then manufacture, the eponymous Fifth Generation Fighter Aircraft (FGFA) at Nashik, the future of the Sukhoi-30 production line is uncertain.

Nor was the announcement of fresh orders this year reassuring. “The company has received order of 41 Advanced Light Helicopters and 8 Chetak helicopters from Indian Armed Forces in the FY 2017-18”, stated HAL on Monday. The total value of these orders is no more than Rs 3,000 crore.

For long an Indian aerospace monopoly, HAL once boasted of orders in hand worth Rs 150,000 – 200,000 crore – amounting to a production backlog for eight-to-eleven years at current rates. Besides the Sukhoi-30, there were orders for Jaguar fighters, Hawk advanced jet trainers, Dhruv advanced light helicopters (ALHs) and the Tejas light combat aircraft.

HAL’s meagre order book is assessed to be a reason for the underwhelming response to the company’s initial public offering (IPO) last month. Retail investors subscribed to just 40 per cent of their quota leaving it to domestic financial institutions and mutual funds to rescue the IPO.

One silver lining in HAL’s announcement on Monday was the initial operational certification (IOC) of the indigenous Light Combat Helicopter (LCH), an important milestone towards production. In December, the IAF and army initiated the purchase of the first 15 LCHs – an order worth Rs 3,465 crore.

Eventually, the army plans to induct 114 LCHs and the IAF is committed to buying another 65 – orders worth Rs 41,350 crore at the current price of Rs 231 crore per helicopter. However, this production will be spread over about a decade.

HAL anticipates another income stream from the production of 187 Light Utility Helicopters (LUH) and up to a hundred HTT-40 basic trainers, both of which are being indigenously developed in Bengaluru.

In December, Raju told an aerospace industry gathering in New Delhi that they could participate as sub-vendors in these two projects, which would generate income worth about Rs 12,500 crore. This would include the manufacture of 100 HTT-40 trainers for Rs 45-50 crore each, and 187 LUH for about Rs 40 crore each.

Notwithstanding the complexity of helicopter development, HAL’s major income stream has always come from building fighter aircraft. Besides earlier commitments for 40 Tejas light combat aircraft (LCA), the defence ministry kickstarted the procurement of another 83 Tejas Mark 1A fighters in December. At an anticipated cost of Rs 400 crore per Tejas Mark 1A, that contract would amount to about Rs 33,000 crore.

“We are trying to get the IAF to convert that into a firm contract for 83 Tejas Mark 1A, which would improve our production planning, and our order book”, says Raju.

However, HAL has faced recurring problems in ramping up Tejas production even to the initially targeted eight fighters per year. The planned production rate of 12, and then 16 Tejas per year, is some way off.

That leaves HAL Nashik heavily dependent on orders for overhauling the Sukhoi-30 fleet. With each fighter requiring an overhaul after 1,500 hours of flying (or 14 years of service, if that happens first) the IAF’s fleet of 272 Su-30MKIs would, at its peak, require 30 fighters to be overhauled each year.

Finally, HAL will generate income from an on-going upgrade being carried out to the IAF’s fifty-odd Mirage-2000 fighters, and then possibly to the 120-strong fleet of Jaguar deep strike aircraft. The latter order, however, has been in the procurement pipeline for long and there is little sign of it materialising soon.
Posted by Broadsword at 20:37

So is not sukhoi a more capable fighter...complete in all aspects

I hope I don’t sound like a needle stuck in a broken record, repeating this theme over again, in the comment section of this excellent blog.
I have argued previous this company must be broken up, into smaller pieces and sold.
HAL has been a millstone around India’s neck and has thwarted progress.
The aim must be to create “Competitive tension” within HAL. Competition is the greatest driver for innovation, productivity and earning power in any economy.
It should be our defence policy to develop and foster this competition. Failure to do so has resulted in third rate Tejas and other shoddy goods not a par with the best.
Our Government has a responsibility to obtain the right capability for our Armed Forces - and to get value for money for the taxpayer.
Ensuring That Our Armed Forces get the best value for money, will happen only by open competition in the global market .
By open-competition I mean, we create an environment that encourages a thriving and globally competitive Indian defence sector. HAL is a hindrance to companies wishing to do business with the government. The private defence supplier, will not invest, research and tender while Government assisted HAL has been given an advantage.
To repeat, Competition and NOT favouritism and subsidy must remain at the heart of our approach.
This is how Home grown Indian defence industries will achieve exportability and meet the needs of international customers too.
The policy should be on making it easier for Indian private sector companies to do business with Indias defence buyers. IITs should be encouraged to work in partnership with private companies.
Particularly make it easier for companies with innovators and those which are small and medium-sized private enterprises to do business with defence buyers. The small should be encouraged the big must stand on their own feet.
Intelligent use of competition and new sources of supply, particularly from adjacent private sectors of the Indian economy, can help us bolster value, productivity and innovation.
Meanwhile if, as Broadswords reporting informs us, HAL has a declining order book, tough we should take away its crutches - our taxpayers have subsidised HAL for decades with very little in return.

HAL like al other major aerospace companies world over has to learn to survive on own developed products.
No short cuts here. They are lucky GoI will be supportive.
Hence best way to maintain growth is to bring out HTT, IJT,LUH, LCH, Saras quickly to manufacturing lines. Once indian forces use them in bigger numbers they can try to export them.
I suggest they stay away from imported screwdriver giri and maybe pickup a stake in Kaveri too.

India badly needs bombers (like SU-34) and ground attack fighters (like (SU-25) immediately to be ready for a two front wars...

Relentless attacks by SU-34 and SU-25 in Syria tipped the hand in favor of Syria...
Since these are Sukhois, their technology has commonality with SU-30MKI to some extent...

So India must seriously consider buying 36 Super Sukhois (near 5th Gen technology) and some numbers of SU-34 and SU-25 as a stop gap if Russia is willing to transfer all of the technologies (Engine, AESA, IRST, and EW) to upgrade all of Indian SU-30MKI to Super Sukhois...

Perhaps it would make Russia feel comfortable about future strategic relationship and ease on transferring the technologies...

Perhaps they may help with Kaveri Single Chrystal Blade technology to realize it as a fighter bomber engine that India so yearns...

I think it worth a try during RM Sitharaman visit to Moscow...

India badly needs a combination of SU-34 and SU-25 to win the Tank war with Pakistan and may be swarming Chinese soldiers in the Himalayas...

Whatever is the case, they must not vacillate further on urgent IAF needs as Tejas and MCA are far away to help India in any way...

Pakistan and China are relentlessly upgrading their fighters and also numbers ...


DOES OUR AIRFORCE HAVE A LONG TERM VISION....DRONES ARE GOING TOBE THE MAINSTAY OF CHINA IN TEN YEARS

CHINA WILL soon transfer them to Pakistan...via one belt economic link

Do you realise that by batting for HAL all the time you are supporting inefficiency and a poor performer!!
Please do an audit of their performance of the last 5 years, I am surprised with the following
1.) LCA cost is around 500 Cr - seriously?? that is around $80 mil which is the target price of a series F-35 :) and more than a F-16 :)) and that too for IOC variant, imagine for FOC and MK1a?? and Mk2??
2.) It was supposed to have been 150 to 200 Cr so how can it double with no great value addition!!
3.) Price difference is 100 Cr with a Su-30mki? how can this happen? Why is Su-30mki made in India costlier than one made in Russia?? anyways HAL makes 1 plane a month!!
4.) This year they delivered 40 aircrafts - last year or the year before it was 60!! how the hell they make more money with fewer planes!! Have they been cooking their books??

But your only concern is to give them orders thats all. Do you not realise that LCA and Su-30mki and all repairs and refits has to be done at HAL? and 80 LCA MK1A will definitely be costlier than the existing LCA's to it cannot be 33000 Cr but will be around 50000 Cr which is a lot of money.
LCH will come so that will bring money as also Su-30mki upgrades.

In no other country comparable to IAF do we have just 1 company doing everything for IAF!! Looks like you have been treated very well at HAL but what a pity to see their mis-management. You are not bothered about failure of IJT!! you conviniently overlook that they make no more than 4 or 5 LCA's a year and promise 20!!

Even shipyards like HSL and GRSE went through this phase - MoD can never let it die that too after investing so much in the facilities. In this age of competition you must take bold decisions, shut down or move your facilities you don't need, all around companies do that. how can you expect MoD to give you orders lifelong just to keep a company afloat.

If you as an organisation is confident and capable then you don't have anything to worry or fear!