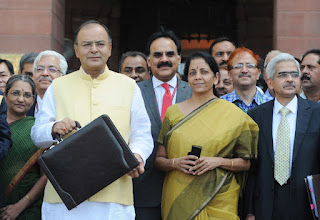 The finance ministry has shot down the defence ministry’s proposal to implement a longstanding quest of the Bharatiya Janata Party (BJP) – to create a “non-lapsable defence modernisation fund (DMF)”, in which the military’s unspent capital budget is parked at the end of each financial year, from where it can be made available for the subsequent year’s procurements.

The military points out that bureaucratic delay in sanctioning capital (modernisation) expenditure has led to the surrender of billions of rupees in successive years, severely disrupting the military’s long-term modernisation plan. The BJP has traditionally been sympathetic to this perspective.

Three months later, the NDA was voted out of power. For the next ten years, the United Progressive Alliance (UPA) government rejected any need for a non-lapsable DMF. From 2014-2016, the current NDA government followed the UPA lead.

In December 2016, however, the defence ministry did an about turn, informing Parliament’s Standing Committee on Defence (hereafter ‘the Committee’): “On further consideration… it has been felt that the utility of creation of a non-lapsable, roll over fund for Capital cannot be completely negated as the same would help in eliminating the prevailing uncertainty in providing adequate funds for various defence capability development and infrastructure projects. The Ministry therefore has reviewed its stated position taken so far and proposes to take up the case for setting up of a capital non-lapsable, roll–on fund afresh with Ministry of Finance immediately.”

But when the defence ministry took up the proposal, the Finance Ministry shot it down. According to the Committee’s latest report, tabled in Parliament on March 13, the Defence Ministry reported: “The proposal for creation of ‘Non–lapsable Capital Fund Account’ in Public Account for Defence Modernisation, was sent to Ministry of Finance, but the same was not agreed to by the Ministry of Finance (sic).”

The Finance Ministry has offered several reasons for turning down the proposal for a non-lapsable DMF. Its first reason is, “Adequate budget provision is made available to Ministry of Defence to finance the capital requirements of Defence Services.” Presumeably this suggests that each year’s capital budget allocations are sufficient in themselves and do not need to be supplemented by the previous year’s unspent balance.

This argument, however, is negated by the army vice chief’s detailed complaint to the Committee that this year’s capital allocations are inadequate even to service instalments due on purchases made during earlier years. The latest Committee report has noted that all three services got significantly lower allocations than they had bid for. The army got just 60 per cent of what it had projected; the navy got 56 per cent; and the air force got barely 45 per cent of its requirements.

Next, the finance ministry argued that a non-lapsable DMF would not be available for capital expenditure automatically, but would require fresh Parliamentary sanction through Demands for Grants. “Hence, mere creation of non-lapsable funds yields no additional advantage to Ministry of Defence and could rather induce complacency in incurring expenditure”, stated the finance ministry.

Further, the finance ministry objected that “Creating a corpus” of non-lapsable DMFs, would make money “unavailable for other essential expenditure.” It pointed out that the Standing Committee on Finance had recommended that “unutilized funds/funds kept idle for more than two years may be transferred to Consolidated Fund of India so that these funds could be utilized for other prioritized schemes”.

Finally, the finance ministry argued that “Moving general revenue out of Consolidated Fund and parking in [a] corpus fund” would violate Article 266(1) of the Constitution and “could raise competing demand from other Ministers.”
Posted by Broadsword at 08:26

The more I see how the system works, the more I'm convinced that that even the COAS has zero part to play in how well or otherwise the army delivers. The real COAS is the PM of India. That's OK but then let's not blame the General for anything concerning the army or the defence of India. COAS is simply a clerk in uniform, implementing orders.

There is a typo. On February 3, 2014, National Democratic Alliance (NDA) finance minister (and former defence minister) Jaswant Singh, while presenting the interim budget, announced the setting up of a non-lapsable defence modernisation fund (DMF).
Should be February 3, 2004.