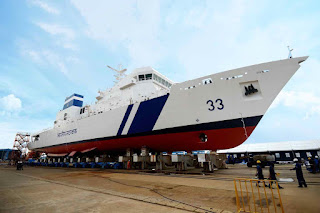 Self reliance in 13 areas by 2025, including fighters, tanks, warships, guns

India a global leader in cyberspace and AI (artificial intelligence)

Permit 74 per cent FDI under automatic route for “niche technologies”

The defence ministry on Thursday released a draft “Defence Production Policy 2018” (DProP 2018), with the ambitious vision of catapulting India into the world’s top five defence producers.

The policy intends to capitalise on India’s IT strengths to “Make India as a global leader in Cyberspace and AI (artificial intelligence) technologies (sic).”

And, somewhat incongruously, the new policy commits to building a 80-100 seater civilian aircraft within the next seven years.

The policy is silent, however, on the fate of ongoing global procurements of the platforms to be indigenised, including single-engine and carrier-borne fighters, infantry small arms, maritime surveillance systems and others.

Stakeholders have until March 31 to submit suggestions to modify DProP 2018. Thereafter, say ministry sources, the policy will be placed before the union Cabinet since implementing it would require a high degree of inter-ministerial coordination.

In January 2011, then defence minister AK Antony had unveiled the first production policy, DProP 2011. At the release function, referring to India’s import of 70 per cent of its defence needs, he stated: “This large-scale dependence on foreign sources is unacceptable for a country like India.”

In February 2015, Prime Minister Narendra Modi had stated in Bengaluru: “Even a 20 to 25 per cent reduction in imports could directly create an additional 100,000 to 120,000 highly skilled jobs in India.”

In 2016, one of Sitharaman’s predecessors, Manohar Parrikar, was considered unrealistic when he proposed raising India’s defence exports from the current level of about $330 million to $2 billion – a target still nowhere in sight. Now Sitharaman’s DProP 2018 is setting a target of Rs 35,000 crore (about $5 billion) by 2025.

DProP 2018 seeks to achieve this by exhibiting Indian capabilities in Defence Expo (in Chennai next month) and Aero India (on alternate years), promoting exports through government-to-government agreements and offering lines of credit to buyer countries, setting up export offices in buyer countries, setting up a Defence Export Organisation jointly with industry, and hastening end-to-end export clearances.

It remains unclear what products India will export to meet these targets. There are already indigenous platforms like the Arjun tank and Tejas fighter. But the reluctance of the army and air force to accept them into service causes foreign buyers to lose interest. Where there is foreign interest, as in the case of naval patrol vessels and utility helicopters, Indian industry is short of production capacity.

Since June 2016, FDI up to 49 per cent has been permitted automatically, with up to 100 per cent “permitted through Government approval, wherever it is likely to result in access to modern technology or for other reasons to be recorded.”

Industry experts point out that the problem, even currently, lies not in low FDI caps, but in identifying the technologies that would be eligible for higher FDI. DProP 2018 does not shed light on this.

DProP 2018 elaborates on the two “defence industry corridors” –in Tamil Nadu and Uttar Pradesh -- that were announced in the Budget, and which Sitharaman has been pursuing vigorously in her home state, Tamil Nadu. The policy stipulates that, each corridor would have “one major cluster of defence production units around an anchor unit”.

A special purpose vehicle (SPV) in each corridor would develop an eco-system for defence production, with testing and certification facilities, export facilitation centres and technology transfer facilitation, for which the central government would contribute 50 per cent of the cost, subject to a ceiling of Rs 3,000 crore.

In addition, DProP 2018 throws up several apparently random ideas: encouraging automotive component manufacturers to upgrade skills to transition to aerospace design and manufacture; conducting “hackathons” to resolve specific problem areas, for which Rs 1,000 crore would be earmarked for 2018-2022; the setting up of Defence Innovation Hubs for encouraging start-ups; and a clear and well founded emphasis on bringing micro, small and medium enterprises into defence manufacture.

The government should put up a statement on how much of the DPP first made in 2011 achieved. List out corrective actions taken based in experience. That should be basis of new DPP.
We have not designed a single civil airliner yet, we want to make 80 seater in 7 years. There is no wind tunnel test reports or model being shown around , is it really Desi ?
MSME have low fininacial strengths. They need consistent orders . Look at Arjun , no one can afford to support such product program however patriotic.

Without adequate budgetary support, this is all a pipe dream.

It indeed looks like the Pakistani's are trying to really up the ante. The measuring system illustrates that they are extremely serious about MIRV. What is our government doing about this? Will we conduct another surgical strike to scare them into stopping this?

A target Year of 2040 would appear to be more practical. This date seems to be fixed keeping in mind the 2019 and the next General election after that.

It looks ambitious.
Look at intercom the recent tikes, things have been taking off.
Tejas SP9 flew. So the manufacturing should be on track.
The indigenous artillery are on track two models : Dhanush and ATAGS.
Dhruv is doing great.
HAL should possibly make more Cheetal pending LUH to counter delays .
Hope the OFB assault rifles come of age quickly, then once the few thousand imports are through. These will come on line
So that leaves us with drones and tanks/IFCV !
Then ships, we need to build them quicker.