India kicks off a $2 billion procurement of Sea Guardian drones 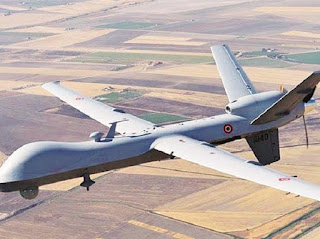 On Wednesday, the government disclosed India’s next major defence purchase from the United States – the procurement of Sea Guardian unmanned aerial systems (UAS) to patrol the waters off the Indian coastline.

The contract for an estimated 22 Sea Guardian drones will be worth approximately $2 billion. Like most defence platforms that New Delhi has bought from Washington over the last decade, this deal is being pursued on a government-to-government basis, and with no manufacture in India.

The defence minister told Parliament in writing today in response to a Member’s question: “Request for Information (RFI) for Predator ‘B’ Sea Guardian [drones] was issued to the US Office of Defence Cooperation on 14.11.2017 (November 14) and response is awaited”.

“Procurement of Predator ‘B’ Sea Guardian is being progressed under Buy (Global) category [of the Defence Procurement Procedure of 2016] and no transfer of technology is envisaged”, stated the minister’s response.

The Sea Guardian will add to $5 billion worth of weaponry already in the pipeline from the US. That includes four Boeing P-8I Poseidon maritime aircraft for a billion dollars; one C-17 Globemaster III for $366 million; $3 billion worth of helicopters – including 22 AH-64E Apache attack helicopters and 15 CH-47F Chinook heavy lifters – and a $700 million order for 145 M-777 ultra-light howitzers.

The Sea Guardian, built by US firm General Atomics, is the naval version of the legendary Predator B armed drone (also termed the MQ-9 Reaper), with which the US has killed terrorists in Pakistan, Afghanistan and Yemen. India had asked for the armed version, but Washington has only offered the unarmed Sea Guardian, which performs maritime surveillance.

Travelling at 300 kilometres per hour at 50,000 feet, the Sea Guardian flies 14-hour missions to monitor waters 1,800 kilometres from base. It sends imagery in real time to a ground control room on base, which flies the drone through a two-way data link.

Pointing out that India is the first non-NATO country to which Washington has agreed to export the Sea Guardian, US industry experts tell Business Standard India’s designation as a US “major defence partner” opened the doors for the sale.

Being a “Category 1” system under the Missile Technology Control Regime (MTCR), Sea Guardians are they are tightly controlled because of their presumed ability to also deliver nuclear weapons.

MTCR member countries are required to adopt a “presumption of denial” for all requests for “Category 1” systems, except on pressing national security grounds. So far, Washington has cleared sales of the Sea Guardian only to US allies that are engaged in active combat operations in alliance with US military forces. Operators include France, Italy, Netherlands, Spain and the United Kingdom.

According to a The New York Times report in June, pro-Indian US congressmen facilitated the Sea Guardian clearance. After three Indian requests to the Pentagon, Senators John Cornyn and Mark Warner wrote to Defence Secretary James Mattis and Secretary of State Rex Tillerson to clear the sale, to “advance U.S. national security interests and protect U.S. jobs.”

India’s own RPV development programme is relatively primitive. Updating parliament today, the defence minister revealed: “The development of Unmanned Aerial Vehicle (UAV) Rustom-II is an indigenous effort wherein majority of the sub-systems like airframe, landing gear, avionics systems, flight control systems and datalink systems have been developed indigenously through various private industries. Sub-systems like propulsion systems, sensor systems and payloads have been currently imported for which indigenous development has been undertaken through sister DRDO labs [Defence R&D Organisation laboratories]”.
Posted by Broadsword at 08:01

This is like remote eyes and ears for our P-8I. Maybe both together will give a higher coverage than good old Tuploves ! Hope our guys learn and the Tapas grows .

Looks like a javelin redux. India asked something and the US offered something else - the end.

Here too, India had initially asked for armed drones and the US offered surveillance drones instead. I will not be surprised if India shelves this deal like javelin.

Whenever I read about armed drones, I immediately see video flashes of srilankan army dropping bombs on LTTE(actually, just Tamil residential areas) in the last month's of the SL civil war. Those drones were given to SL army by the Chinese.

Another useless purchase by the great Indian kleptocracy.
The money would have been better spent on developing indigenous satellite technology for surveillance, if this was the purpose.
There is no critical difference in imagery between the Drone at fifty thousand feet and that from a Satellite, both are adequate for purpose, enough the read the name of merchant vessels from the skies or a newspaper headline.
The critical difference is when the drone is armed and can launch an attack on shipping or boats within a matter of minutes. But armed drones are NOT being purchased.
These Unarmed drones are not needed for surveillance, even India’s present satellite real time imagery is adequate, so this purchase does not make any sense, unless part of the cash will go to fund the next Gen Election campaign.
By the way China has now extended its road up to the Jampehri ridge on the Donglang plateau, in the next iteration of Bing or Google maps, the Indian public will be able to see this clearly.