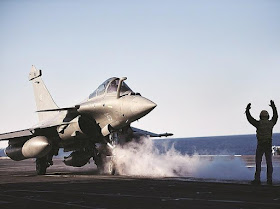 Prime Minister (PM) Narendra Modi – on April 10, 2015 in Paris -- stunned the global military aerospace industry with the announcement that India would buy 36 Rafale fighters in a government-to-government arrangement with France, effectively ending an eight-year global procurement process for 126 fighters. There is controversy too over how the deal was announced – by the prime minister himself, during a state visit to France – without clearances from his cabinet or defence ministry.

That announcement resulted in a Euro 7.8 billion ($9.2 billion, Rs 58,000 crore) contract for 36 Rafale fighters, signed in June 2016. It has led to charges of corruption and nepotism, levied by the opposition Congress Party against the Bharatiya Janata Party (BJP)-led government. The Congress alleges that Dassault, which builds the Rafale, is being paid far more than the price earlier negotiated. And that largesse, in the form of defence offsets, is flowing to Reliance Defence, headed by Anil Ambani, a Gujarati industrialist with no experience in aerospace manufacture, but perceived to be close to the PM.

The BJP’s riposte, delivered last Friday by Defence Minister Nirmala Sitharaman, accuses the Congress of delaying the Rafale procurement for ten years from 2004-14, while heading the United Progressive Alliance (UPA) government. Sitharaman says that Modi, worried about a precariously under-equipped Indian Air Force (IAF), boldly went ahead in the national interest, following all procedures, to buy the Rafale.

First, did the PM follow due procedure in announcing, alongside French President Francois Hollande, that France would supply 36 fully built Rafales? Or was this Modi’s decision alone?

Second, rather than serving the deal on a platter to a single vendor – private French firm, Dassault – could the PM have brought in another vendor, creating a competitive environment for price discovery and cost negotiation?

Third, was the UPA guilty of a full decade of foot-dragging between 2004-14 on the eventually aborted procurement of 126 medium multi-role combat aircraft (MMRCA), leading to such a fighter shortage in the IAF that an emergency purchase of 36 Rafales became essential.

Fourth, does the per-fighter cost in the 36 Rafale contract work out lower than what France had offered in its MMRCA bid, which was a key condition of the purchase?

Addressing the media on Friday, a feisty Sitharaman insisted the PM had followed due process, with the purchase of 36 Rafales having been cleared by the Cabinet Committee on Security (CCS). “In September 2016… the Inter-Governmental Agreement for buying 36 Rafales was signed in the presence of the defence ministers of France and India”, she stated, underlining that one of her predecessors, Manohar Parrikar, was on board.

In fact, Parrikar wasted no time in distancing himself from the decision after the Modi-Hollande announcement. “Modi-ji took the decision; I back it up”, he told Doordarshan on April 13, 2015. Elaborating to NDTV, he described the decision as “the outcome of discussions between the prime minister [of India] and the president of France.”

In fact, Parrikar had learned about Modi’s impending announcement precisely a week in advance. As Business Standard reported (September 23, 2016 “As Rafale pact is inked, many concerns remain”), Parrikar was driving to the airport on April 3, 2015 to catch a flight to Goa, when he received a call on his mobile phone summoning him to the PM’s office. There, Modi sprung the bombshell about the proposed announcement and tasked Parrikar to manage the media during Modi’s nine-day tour of France, Germany and Canada.

Both Sitharaman and Parrikar point out the defence procurement procedure (DPP) permits regular procurement procedures to be bypassed on strategic grounds. Indeed, Paragraph 71 of the DPP caters for “occasions when procurements would have to be done from friendly foreign countries which may be necessitated due to geo-strategic advantages that are likely to accrue to our country.”

However, Paragraph 71 also stipulates that this requires prior clearance. It says: “Such procurements will be done based on an Inter Governmental Agreement after clearance from CFA (competent financial authority)”, in this case the CCS.

Further, Paragraph 73 of the DPP says: “Decisions on all such [strategic] acquisitions would be taken by the Cabinet Committee on Security (CCS) on the recommendations of the DPB (Defence Procurement Board)”.

No ministry or cabinet body was consulted before Modi committed India to the Rafale purchase on April 10, 2015. The CCS sanction was processed and obtained only later.

Putting Dassault in the driving seat

A key criticism of this procurement is that Modi’s Paris announcement effectively handed Dassault a single-vendor contract, ignoring the readily available option to bring in one more vendor.

Says a senior defence ministry official of that time who has recently retired but requests anonymity: “The PM chose Rafale based on the IAF’s technical evaluation and flight evaluation trials in the MMRCA process. Why did he ignore the second fighter, Eurofighter Typhoon, which had also passed that IAF evaluation? If the government wanted to truncate the MMRCA contract into a 36-fighter buy, India’s interest clearly demanded that both Eurofighter and Dassault be asked for new price bids. That would have created a competitive procurement, with two rivals bidding against each other. Instead, the PM inexplicably handed Dassault a walk-over with a single-vendor contract”.

Interestingly, Eurofighter had kept its India office open, even after India declared Dassault the winner of the MMRCA procurement in 2012. Asked why, a top Eurofighter official told Business Standard in 2013: “If India decides, for whatever reason, to re-evaluate its MMRCA decision, it is our duty as the L-2 (second lowest bidder) to provide India an alternative option.”

As it turned out, India did re-evaluate that procurement, but inexplicably ignored the opportunity that Eurofighter presented. The resulting financial loss is hard to assess, but aviation industry analysts assess it was at least in the hundreds of million dollars.

Why did UPA stall Rafale?

Sitharaman cites the UPA’s “inability” to conclude the MMRCA deal as justification for Modi’s buy of 36 Rafales. Repeatedly blaming the Congress Party for having failed to buy fighters “for an entire decade between 2004-2014”, Sitharaman alleged this “act of omission” led to severe fighter depletion in the IAF.

In fact, Sitharaman’s accusation of a decade of neglect is chronologically inaccurate. The MMRCA tender was issued in 2007. For the next four years, the IAF conducted technical evaluation and flight trials; only in 2011 were the Eurofighter Typhoon and Rafale declared to have met IAF criteria. Only on January 30, 2012 was the Rafale declared the L-1 bidder. If there was Congress foot-dragging on the Rafale, it was for two years and three months till the May 2014 transfer of power, not for a full decade.

Notwithstanding Sitharaman’s exaggeration, the question remains: why did the UPA drag on cost negotiations for over two years with Dassault? And why did two NDA defence ministers – Arun Jaitley, then Parrikar – also fail to conclude the contract for a year.

The incredible answer – given that Modi bought 36 Rafales based on the logic that Dassault had won the MMRCA tender – was that the defence ministry had realised as far back as 2012 that Rafale might have been erroneously declared the lowest bidder.

Defence ministry sources in the Cost Negotiating Committee (CNC) – a multi-member body that evaluated Dassault’s commercial bid – say the sketchiness of Dassault’s bid forced them to make certain costing assumptions in declaring its bid lower than Eurofighter’s. These assumptions related to a new model of bidding based on Life Cycle Costing, which was being tried out for the first time in a tender.

This sharply divided the CNC in 2012-13, when three members wrote a dissenting note demanding that the costing assumptions made for Dassault’s bid should be officially approved at the competent level, rather than leaving the onus on the CNC.

When Dassault itself presented different costing figures for Rafales built in Hindustan Aeronautics Ltd – a tender stipulation – it became clear, including to then defence minister, AK Antony, that Dassault had been incorrectly named the L-1 vendor.

Parrikar himself has substantiated this account. On April 13, 2015, three days after Modi’s Rafale announcement, Parrikar stated on Doordarshan: “There is another reason why the [tender] for the Rafale is stuck. When the CNC determined the L-1 vendor, many people raised questions on the Life Cycle Costing model that was used to compare bids. In this connection, the last defence minister issued a directive to go ahead with the CNC negotiations, fix a price, and then come back and verify whether L-1 determination was correctly done.”

Asked to confirm this during her press conference on Friday, Sitharaman declined to comment.

Says a retired secretary-level defence ministry official about the CNC’s assumptions that led to Dassault being declared L-1 in the MMRCA contest: “In my view, a vendor’s commercial bid that has serious gaps should be treated as an incomplete bid and the vendor disqualified. Costing assumptions can be made only on minor issues.”

The question of cost

Said Parrikar on Doordarshan on April 13, 2015, explaining the conditions of the 36-Rafale buy: “Our deal is being finalized on very clear terms: ‘Better terms than those existing’. It will be on cheaper terms than those quoted in [Dassault’s bid in the MMRCA tender].”

The BJP insists this condition has been met. However, the government has released no figures for Dassault’s earlier quote, nor a cost breakdown of what Dassault is being paid for 36 Rafales.

On Friday, asked for cost breakdown by the media, Sitharaman promised: “We will give you the figures that you want”. She ordered Defence Secretary Sanjay Mitra, who was sitting beside her, to provide them. Despite repeated enquiries, no figures have been released so far.

[Tomorrow, Part II: “Was the Rafale bought cheaper?” A financial analysis of the price paid to Dassault]
Broadsword at 08:51
Share