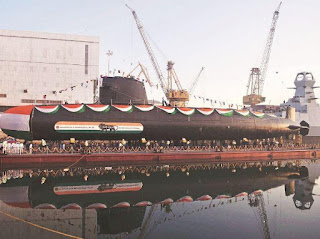 Tenders are maturing, but the navy its constrained by its lowest warship budget since 2011-12

About two and a half years have elapsed since the navy last signed a contract for new warships – the Rs 45,381 crore deal in 2015 with Mazagon Dock Ltd, Mumbai (MDL) and Garden Reach Shipbuilders & Engineers, Kolkata (GRSE) for seven stealth frigates under Project 17A.

With numerous other warship purchases stuck in the defence ministry’s famously clogged procurement pipeline, the navy has surrendered Rs 15,041 crore rupees during the last five years from its budgetary allocation for new warships.

(Source: Union government budget documents)
Only in 2014-15 did the navy manage to spend its allocation, overspending by Rs 779 crore.

This reduction in the fleet budget is compounded by inflation, which usually runs at 5-10 per cent annually for defence weaponry, including warships.

Now, with Rs 45,000 crore worth of warship contracts near signing, navy admirals tell Business Standard there is concern the government might cite a budget crunch. If the navy were to sign the impending contracts without delay, it would need to pay out Rs 4,500 crore, which is the traditional 10 per cent signing amount.

However, most of this year’s Rs 11,023 crore budget is pre-committed towards instalments on earlier contracts and on-going projects, including the construction of Project 75 Scorpene submarines, Project 15B destroyers, Project 17A frigates, Project 28 corvettes, the indigenous aircraft carrier, INS Vikrant, and others.

The admirals say the contracts for 23 new warships depends upon whether the government agrees to allocate an additional Rs 4,500 crore towards the “Navy Fleet” accounting head in the defence budget.

“The government thought it fit to take back Rs 4,371 crore last year and Rs 5,285 crore the year before. So, hopefully, it will find a way to enhance this year’s allocation by a similar amount”, says a senior admiral, speaking anonymously.

The 23 contracts nearing finalisation are for the building in Indian shipyards of five hydrographic survey vessels, two diving support vessels, and 16 anti-submarine warfare shallow water craft (ASWC). These will involve a pay out of about Rs 20,000 crore over 5-7 years, with an advance of Rs 2,000 crore to be paid this year.

“We have concluded cost negotiations with the shipyards that will build these vessels. By the year-end, the first two contracts should be signed. The one for ASWC needs to be cleared by the Cabinet Committee on Security, so we are targeting March 31”, said a MoD official closely involved in these procurements.

Besides these, the navy hopes to conclude another big contract this year for building four “landing platform docks” (LPDs). The estimated Rs 25,000 crore contract is currently at the bid-opening stage.

After concluding these Rs 45,000 crore worth of contracts this year, the navy’s target for 2018 is a Rs 25,000-30,000 crore contract for four Grigorivich-class frigates (Russian nomenclature: Project 1135.6). Two of these stealth frigates will be built in Russia, while Goa Shipyard Ltd will build the other two.

Towards this, the navy has about 75 vessels of various types in the procurement pipeline, which will be completed by 2027 (see Table 2).