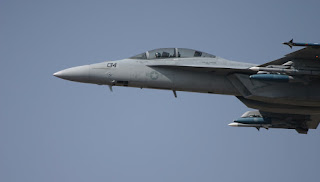 The Boeing Company (hereafter Boeing), which is a vying strongly to supply the Indian Navy with 57 “multi-role carrier borne fighters” (MRCBF), has entered talks with Hindustan Aeronautics Ltd (HAL) to explore the co-manufacture of its F/A-18E/F Super Hornet fighter in India, say credible sources in the defence ministry.

Along with HAL, Boeing also intends to involve the Mahindra Group in building Super Hornets in India.

Boeing and HAL have already held exploratory discussions in Bengaluru in September and are scheduled to meet on Friday in Bengaluru for another round of talks. They will also finalise a “non-disclosure agreement” that binds all sides to keep their negotiations confidential.

Contacted for comments, a Boeing spokesperson responded: “HAL has been a key partner of Boeing for over two decades and today manufactures components for our commercial and defense platforms, including for the F/A-18 Super Hornet. We are continually exploring ways to expand that relationship.  Needless to say, we cannot comment on specific discussions with our partners.”

The defence ministry did not respond to a request for comments.

Boeing seeks to leverage HAL’s long experience in licence-producing aircraft in India, most recently the Hawk trainer, and Jaguar and Sukhoi-30MKI fighters; and to present the defence ministry with a clear plan for co-producing the Super Hornet in India with a high indigenous content.

This would provide the US aerospace giant valuable advantage over rival vendors who partner private sector firms that are novices in aerospace manufacture.

Furthermore, Boeing’s partnership with HAL – which already has an airfield and manufacturing hangars in Bengaluru – would significantly reduce the price of each Super Hornet. In contrast, a vendor that partners a private Indian firm would need to factor aerospace infrastructure into its pricing.

Now Boeing is doing exactly that, by seeking to co-opt HAL and the Mahindra Group into co-producing Super Hornets.

Boeing’s public-private strategy contrasts with the approach being followed by Lockheed Martin and Saab in a separate procurement of 114 single-engine fighters, which is expected to gather momentum shortly. Since the defence ministry requires the single-engine fighters to be built in India under the “strategic partner” (SP) policy, Lockheed Martin and Saab have both partnered private sector firms – Tata Advanced Systems Ltd (TASL) and the Adani Group respectively – to build in India.

In contrast, the “request for information” (RFI) for the MRCBF acquisition, which the navy issued in January, predates the SP Policy that was promulgated only in June. Unlike Lockheed Martin and Saab in the single-engine fighter procurement, Boeing is not restricted to partnering only a private sector company.

The RFI for the MRCBF specifies: “GoI (Government of India) is desirous of license production of the aircraft after acquiring ToT in the case (sic).” While this appears to place the procurement in the “Buy and Make” category, the “request for proposals” (RFP) is likely to clarify this issue. Industry experts say the RFP might conceivably shift the acquisition into the SP category.

The Super Hornet, which is the US Navy’s main carrier borne fighter, is likely to face competition in India’s MRCBF tender from French company Dassault’s Rafale-M fighter; Swedish company Saab’s Gripen Maritime, and the Russian MiG-29K/KUB that already flies off the navy’s lone carrier, INS Vikramaditya.

The India Navy has already bought 45 MiG-29K/KUB fighters from Russia to equip its current aircraft carrier, INS Vikramaditya, and the second aircraft carrier, the indigenously built INS Vikrant, which is expected in service by 2021. A new, more capable MRCBF was envisaged for the second indigenous carrier, INS Vishal, which is expected in service by 2030 or so. However, unacceptably low serviceability rates of the MiG-29K/KUB are making the MRCBF vital for the navy in a much shorter time frame.

Furthermore, Boeing is looking beyond the supply of 57 Super Hornets to the navy, at the supply of “Made in India” fighters to the Indian Air Force (IAF) too. The IAF, which is down to 32 squadrons of fighters against its requirement of 42 squadrons, had hoped to procure six-to-nine squadrons of medium multi-role combat aircraft (MMRCA) over the last decade. The Rafale was eventually selected, but then only two squadrons were procured, leaving a void that Boeing hopes to fill by establishing a Super Hornet manufacturing line in India.
Posted by Broadsword at 20:19

Does this mean that the Boeing-HAL-Mahindra group will inevitably bag the MRCBF because HAL is in it and compared to its competitors from the Indian private sector has the experience of making aircrafts?

I feel that would be a prudent decision to have twin engined fighter but make sure it must be the latest version that is being made for US navy with GE 414 EPE and latest avionics and electro optinique system and that plane is pretty close to fifth generation plane , ahead of Rafale.if GE starts building GE 414 engines in India then built 400 Tejas planes and I strongly believe there should be at least 55 squadrons with twenty Tejas squadrons and then they can go for total of sixty squadrons. No one particularly China would never dare any misadventure.

Bandalbaaz is at it again.

Sir Why only consider Mig 35k from Russian side and not Su 33 or even better a version of SU 35k.Both were primarily designed for STOBAR carrier operation

Russian Navy went with MiG-29KUB because the Su-33 production line was already shut down and would require significant re-investment to re-open.. MiG-29KUB line was already open and financed by the Indians, so they piggy backed off it.
With its folding wings and tailplanes, plus the folding tailcone and nose pitot, the 'footprint' of the Su-33 on Kuznetsov's deck and hangars is actually LESS than the MiG-29K. Nikhil Agarwal. nikhilag4u@gmail.com

During the trials against the MiG-29K, Sukhoi proved to the Soviet MAP that, thanks to the Su-33's more capable WCS, bigger weapons load and longer range, a carrier wing composed of Su-33's would be more effective than a 50% greater number of MiG-29K's.

In other words, you would need 30 MiG-29K's to do the same job as 20 Su-33's - and they would take up a proportionately greater deck and hangar space.

Even with a folding tailcone and nose pitot, the Su-33 is slightly longer than a MiG-29K, but the critical deck-space dimension is the folded span. This lesser folded wingspan also means that SU33 could have easily fit into both lifts of INS Vikramaditya.

Though MIG-29K or Mig 35k is 50% more fuel efficient. so less need to store more fuel. MIG-29K is 50% lighter. So less load on Aircraft carrier.
Sir, to be fair I have seriously considered alternate factors too.
India couldn't have selected the Su-33 - as the production line had closed after building only 30-ish airframes.

The Su-33 never got the upgrades applied to the land based Flankers (SM, BM etc) - and so lagged behind in capability.

In the meantime, MiG leapfrogged the Su-33 with the new MiG-29K - funded by India - and purchased by the Russian AVMF on the back of that - when the development costs had presumably been amortised.

So comparing the 'new' super-duper MiG-29K with the old Su-33 would seem farstreched.

If the Su-33 had been given the upgrades it always needed, it would undoubtedly have had the same advantage over the new MiG-29K that it enjoyed over the old MiG-29K.
Just a thought / another viewpoint given its benefits and weaknesses.Nikhil


F35 also becomes a stealth option.China will definitely provide them to pakistan in five years

Russia has lacked behind in aeronautical technology and has very poor engine technology. All they produce are hanger queens. The PAFKA is not a fifth generation plane as it cannot do sustained super cruise and network integration is poor and suboptimal. The stealth technology is half baked. India if at all buys Russian planes then buy it in four times larger number as the plane availability is very poor. SU 33 which China has got would never make it blue water navy. MiG 35 is unproven plane with very poor servicibility. You can contact Indian Navy about the MIG 29 and their service record. The Russians have some great technology in some other equipment but sadly it is way behind in aeronautical technology.

Boeing is blackmailing Canada over the spare parts for Canada's ageing CF-18's due to the Bombardier passenger plane conflict with Canada. Their money is made by the passenger planes and military planes are an afterthought. They will blackmail India too! Besides the F-18 is jack of all, master of none type plane hated by its pilots.

Why India is considering this is a mystery. Mig-29K are already operated. New type?

Why is no one talking to getting the F35 for India? Why are these soon-to-be-outdated fighters being sold to India?

BrahMos, the world's fastest supersonic cruise missile, has been successfully tested for the first time from a Sukhoi-30MKI fighter of the Indian Air Force (IAF). The success means the Air Force will now have the ability to strike hostile warships hundreds of kilometres off the coast in just minutes once ordered.