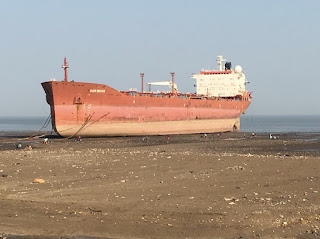 Even in the superstitious world of seamen, few things are as eerie and phantasmal as sitting on the beach at Alang in the darkness, watching a ship that has finished its life, sailing in for breaking – effectively its burial.

This happens on full moon and no-moon nights, when the tide rises an astonishing 35 feet above the low tide mark in Alang. Guided by pilots with lanterns and walkie-talkies, the ship sails in until its keel is wedged solidly into the sand. When the tide goes out, the “beached” vessel is left more than a kilometre inland – a unique tidal phenomenon that has made Alang the world’s largest shipbreaking yard, providing employment to 40,000 workers, according to government figures.

At any time, the 180 beachfront yards at the Alang-Sosiya Ship Recycling Facility – named after two neighbouring villages on the coast near Bhavnagar, Gujarat – are engaged in breaking about 100 ships of various types. Armies of workers swarm over each vessel, ripping out wood, furniture, cabinets, engines, pumps and pipes. All these are bought up by specialist brokers, who then retail them in a four-kilometre-long line of shops that line the road to Bhavnagar.

After the vessel’s insides are stripped, steel cutting begins. Workers with blowtorches and cranes cut ships weighing tens of thousand tonnes into hundreds of metal plates that find their way to western India’s foundries and pig iron plants. An average yard with 450 workers takes up to five months to reduce a 15,000-tonne vessel to nothing.

Alang-Sosiya is enjoying a rebirth after extended controversy over alleged disregard for environmental norms. The turning point came in 2006-07, after environmental activists approached the Supreme Court against the breaking of a French vessel, Blue Lady, which they charged was packed with toxic materials like asbestos boards and printed circuit boards (PCBs). Alang, the activists argued, was ill equipped to handle hazardous materials.

An activist Supreme Court ordered the Union Government to “formulate a comprehensive code” to govern shipbreaking. The government set up the High Powered Committee on Management of Hazardous Waste, which led to the creation of the Ship Recycling Code, 2013 (SRC 2013) – stringent procedures that make shipbreaking safer and prevents pollution by waste materials from ships.

Alang-Sosiya’s recycling yards have a powerful business incentive to “go green”. The International Maritime Organisation pressures ship-owners – through a system of environmental credits, similar to carbon credits – to get their retired vessels broken in yards that adhere to safety and environmental norms.

The Ship Recycling Industries Association (SRIA) told Business Standard that 40 per cent of recycling yards have already obtained ISO 30,000, which certifies conformity to best practices in ship recycling. The remaining yards are working towards meeting these standards and obtaining certification.

Not content with meeting Indian standards, several yards are working to meet the norms of the even more stringent Hong Kong Convention (HKC) of 2009.

“Alang-Sosiya is more expensive than recycling yards in Pakistan and Bangladesh, which blatantly flout environmental norms. But we are regarded as environmentally conscious, so international ship-owners increasingly choose to send their vessels here”, says a yard owner, who requests that his identity not be disclosed.

Its visit report stated: “Members of the ECSA delegation with previous experience of Alang recycling facilities, identified a clear shift in mentality and willingness to be transparent on the part of the Alang recyclers. Furthermore, the most progressive yard owners clearly see a business case for offering sustainable ship recycling conditions to shipowners. Remarkably, the HKC has already a profound impact on the ground.”

Haresh Parmar, Joint Secretary of SRIA, flatly dismisses criticism of Alang-Sosiya on environmental grounds. “Alang recycles 3.5 million tonnes of steel every year. Producing that in steel mills would consume 10-12 million metric tonnes of iron ore, and 6-7 tonnes of coal. We save all this, and recycle the steel without using a single litre of water or a single unit of electricity.”

Parmar also points out Alang recycles 36,000 tonnes of wood without cutting a single tree. Further, recycling yards pay over Rs 1,500 crore in taxes to the government.

The SRIA expects business to rise further after a Japan-funded environment management plan is implemented. During Japanese prime minister Shinzo Abe’s visit in September, the Japan International Cooperation Agency provided a $76 million (Rs 500 crore) loan to upgrade Alang. “The Japanese do not want to send their ships to China for breaking”, says Parmar.
Posted by Broadsword at 17:51

PCB pollution is caused by the chemicals Poly-Chlorinated Biphenyls not Printed Circuit Board.