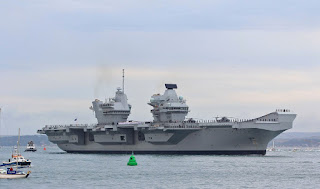 The Indian Navy’s second indigenous aircraft carrier, INS Vishal, will not be – as has been widely reported – an American-style, nuclear-powered “flat-top”. Instead, it will be a conventionally powered 65,000-70,000 tonne vessel, housing some 55 aircraft and incorporating a state-of-the-art “electro-magnetic aircraft launch system” (EMALS) to catapult aircraft off the carrier.

This is the configuration being cleared through the defence ministry; Business Standard has learned through off-the-record interviews with five officials directly connected with the INS Vishal project.

The INS Vishal proposal is before the Services Capital Acquisition Categorisation Higher Committee, headed by the Chief of Integrated Defence Staff. Before the year-end, it could be cleared by the ministry’s apex Defence Acquisition Council, chaired by the defence minister. Given its stratospheric cost, it will also require clearance from the Cabinet Committee on Security.

The navy, which was eager to incorporate nuclear propulsion for INS Vishal, has been told by the Bhabha Atomic Research Centre (BARC) that it would take 15-20 years to develop a nuclear reactor powerful enough for an aircraft carrier, incorporating features to protect it from the corrosive and dynamic marine environment.

BARC has successfully developed a 190 Megawatt (MW) reactor for India’s fleet of four-to-six nuclear propelled, nuclear missile carrying submarines, of which the first – INS Arihant – has already been commissioned. However, INS Vishal would require a reactor capable of generating at least 500-550 MW. That means developing a brand new, miniaturised reactor, ruggedized against a marine environment.

Nor is such a 550 MW reactor in the development pipeline, because of a dispute over who will pay the bill. Says an indignant navy admiral: “BARC wants us to place a ‘developmental contract’ to fund the reactor’s development. Why should we do that?”

Contacted by email for comments, BARC did not respond.

Instead of nuclear reactors, an Integrated Electric Propulsion System (IEPS) will now drive INS Vishal. This will be based on gas turbines that drive generators to produce electricity. The electricity will rotate powerful electrical motors that will turn the warship’s propellers, driving it through the water.

In a nuclear powered warship, the reactor produces steam to drive the electrical generators that produce electricity. That drives the motors and, in turn, the propellers.

The challenge in designing a ship-borne nuclear reactor includes protecting it from saline corrosion, shock, impact and developing the radiation shielding needed to protect the crew – which would spend longer periods of time, in closer proximity to the reactors, than in land-based nuclear power generation plants. In addition, are the issues around refuelling the reactor cores and storing spent fuel.

Designing an IEPS-driven vessel involves different challenges, including identifying a compatible combination of gas turbines, generators and motors, says a designer involved in INS Vishal. Industry sources say India’s choice of conventional propulsion opens the doors for British and French shipyards to provide design assistance. Both are building conventionally powered aircraft carriers, while the US has built only nuclear powered carriers for decades.

Crucially, Indian Navy designers have concluded that an EMALS can be powered through gas turbine driven generators. The navy wants INS Vishal to have a catapult launch facility, which allows the launch of heavier and more diverse aircraft than the ski-jump launch fitted on Indian carriers – the in-service INS Vikramaditya and the under-construction INS Vikrant. Instead of six-decade-old steam catapult technology, the navy has decided to equip INS Vishal with EMALS, which America has fitted for the first time on its newest aircraft carrier, USS Gerald R Ford.

EMALS features what its maker, General Atomics, calls a “dial-up-a-power-level”, allowing catapult power to be adjusted to launch aircraft of completely different sizes – from a light drone to a 60-tonne P-3C Orion maritime surveillance and anti-submarine aircraft. EMALS can launch many more aircraft per hour and is easier to maintain. Steam catapults are more subject to corrosion and put far greater stress on the aircraft being launched.
Posted by Broadsword at 06:28

Come on Col. Shukla...what are you drinking or smoking???

P-3C Orion is a land based AWACS type of turboprop plane...I doubt that that kind of plane was ever launched by any western air-craft carriers...

US only launches E-2C or E-2D, or S-3 Viking planes from USA aircraft carriers...

India should try to get this from Russia .we are importing heavier defense items from Russia which is not possible to develop hear , if their is a will their will be a way.

EMALS launch system will probably cost more than it costs to build the rest of the carrier.

I am an average joe but help me understand why we don’t build a couple of more ~45,000 tonne aircraft carriers-which will now be completed faster now that we are almost close to launching Vikrant, as well as cheaper to build in series production? Not to mention create a industrial base for aircraft carrier manufacturing.


Unlike US, Our enemies don’t need us to develop nuclear powered aircraft carriers or EMALS equipped ones. Just simple, effective, reliable platforms which can deliver the adequate punch.

“BARC wants us to place a ‘developmental contract’ to fund the reactor’s development. Why should we do that?”
Does anybody miss the fact the both, BARC and the Indian Navy are funded by tax payers money? I think the resolution of the issue lies at the political level and not at the level of the salaried, egotist title owners in the employment of the government. The development time frame is an issue though. Sounds like it is time to shake up BARC.

You wouldn't launch a P3C Orion from a carrier. Maybe an E2 Hawkeye.

When all the ships supporting and escorting the carrier are conventionally powered, the advantage of nuclear propulsion is zero! It makes sense in a nuclear submarine which is a stand alone platform but not in an aircraft carrier which must always be protected by a large number of escorting ships.

GET THE AMERICANS TO PROVIDE THE NUCLEAR REACTOR . ONLY THEN CAN BETHE STRATEGIC PARTNERSHIP BE COMPLETE .TRANSFER OF TECHNOLOGY TO BARC MUST BE MANDATED.IN ANY CASE IF AMERICANS WANT TO SET UP WESTINGHOUSE REACTORS IN INDIA . THE CARRIER REACTOR MUST COME FIRST .

DAE/BARC/NPCL already have a working 540/700 MW natural uranium fuelled Pressurised Heavy Water Reactor some units are already operating and producing power commercially. Why not use that with suitable modifications to suit the narrow confines of a Aircraft Carrier etc instead of taking another 15 years for designing a new enriched Uranium fuelled Boiling Water Reactor?

Not true...France, US don't have nuclear powered escort ships. Infact arleigh Burke class DDG is powered by the same LM 2500 GTs as our shivalik class...

So a nuclear reactor is reqd as it can produce enough power for emals... And the rest of the power is used for propulsion.

Plus is doesn't require refuelling mid sea... Which is a major logistical nightmare...for conventional carriers.

US Navy Has 2-3 logistics bases in every continent.

Lets not take US as an example they operate at a much higher level with more resources than we can imagine.

Just keep the PLAN in sight. We only need to meet our defense needs, not for pagentry.

Remember many people die of hunger and poverty in our country everyday. Lets keep our priorities right.

THE IAC-2,3 ARE FOR ARESURGENT 2035INDIA A TEN TRILLION DOLLAR ECONOMY WITH EXPORTS WORLD WIDE OF OVER A TRILLION DOLLARS AND IMPORTS OF OVER 1.5 TRILLION DOLLARS .THE CARRIERS WILL SAIL THE HIGH SEAS FOR PROTECTING INDIAN INTERESTS WORLD WIDE AND NOT ONLY INDIAN OCEAN . CARRIERS WITH NUCLEAR REACTORS ARE AMUST AS RUNNING ON FUEL CAN BE VERY EXPENSIVE OCCUPYING ESSENTIAL SPACE REQUIRED FOR JET FUEL AND WATER .A 65000 TO CARRIER IS OK FOR ARABIAN SEA AND INDIAN OCEAN BUT FOR SEA CONTROL OF THREE TO FOUR OCEANS AND WORLDWIDE SEA CONTROL THE NATION WILL REQUIRE 100000 TONS SUPER CARRIERS LIKE THE FORD CLASS . WITH THE AMERICAN EMBRACE TO SEE THE FUNCTIONING AND LOGISTICS REQUIRED BEFORE THE CARRIER IS BUILT A LEASE OF A FORD CLASS CARRIER FOR TWO OR THREE BILLIONS FOR 12 TO 15 YEARS BE CONSIDERED . BY 2030 THE NATION CAN THEN DECIDE WHETHER TO BUILD THE SUPER CARRIER OR 65000 TONS ONE