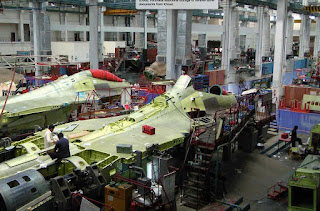 But the SP Policy remains clouded by contradictions and confusion. It has departed in important ways from its original intent, which was to select a deep pocketed private sector partner for each equipment segment – such as aircraft, helicopters, submarines and tanks – and then nurture the SP with preferential treatment and repeat orders, encouraging it to scale up in size and capability.

While this monopolistic model successfully grew the defence public sector, there is entrenched resistance to it being applied to the private sector. Given the on-going criminal investigations into the distribution of similar privileges to private firms in telecom and mining, ministry bureaucrats are loath to create monopolistic policies that would benefit selected private firms.

Meanwhile, private firms in defence worry about the “winner-takes-all” nature of the SP game, where not being chosen as SP amounts to being shut out of systems integration – the lucrative apex of the defence manufacturing pyramid.

Through two years of inconclusive discussions, former defence minister Manohar Parrikar sensibly refrained from promulgating an SP Policy that had still to obtain buy-in from these key stakeholders – the ministry bureaucracy and the private defence sector. Yet, Defence Minister Arun Jaitley, barely two months after replacing Parrikar, went ahead and promulgated a contested SP policy.

Consequently, many controversial issues remain. On August 25, the defence ministry’s acquisitions chief, Smita Nagaraj, summoned private industry representatives to “clarify” the new SP policy. In her office, Nagaraj surprised many by throwing out fundamental elements of the Dhirendra Singh Committee (2015) and the VK Aatre Task Force (2016), which Parrikar had constituted to lay the groundwork for the SP policy. Aiming to broad-base industry participation and pre-empt large monopolies, both committees had proposed restricting private industry groups to just one technology segment each – such as aircraft, helicopters, submarines, armoured vehicles, etc. Nagaraj overturned this by announcing that Indian firms could be SPs in multiple segments. That means that a company that won a contract as SP in, say, fighter aircraft, would also be eligible to build helicopters and tanks.

Further, Nagaraj overturned the SP policy’s stipulation that each technology segment be reserved for one company. This was intended to guarantee sufficient business volumes to each SP within its technology segment, generating profits that could be ploughed back into manufacturing infrastructure and R&D; and driving down prices with economy of scale. Now, with segments proposed to be divided, the two naval helicopter acquisitions initiated in August – one for 123 naval multi-role helicopters and another for 111 naval utility helicopters – could be shared between different firms. If the SP route is eventually chosen for building 197 Russian Kamov-226T helicopters, that could go to a third company. The three contracts would generate sufficient profits to build up one helicopter manufacturer, but probably not three.

The defence ministry has not responded to a Business Standard email seeking comment on these important dilutions of the SP policy.

Defence equipment manufacture in India was for decades reserved for the public sector – specifically nine Defence Public Sector Undertakings (DPSUs) and 39 factories of the Ordnance Factory Board (OFB). In 2001, the private sector was allowed into defence manufacturing but the public sector stranglehold continued, thanks to a skewed playing field. As the SP policy states, the public sector “continue[s] to enjoy a commanding role based on various forms of governmental support over the past decades, including long-term purchase arrangements.”

Now the SP policy aims at: “[Requiring] the private sector partner selected through a laid down procedure by the government to make necessary long term investments in manufacturing infrastructure, an eco-system of suppliers, skilled human resources, R&D for modernization and upgrades as well as and other capabilities, besides production of equipment.”

While the aim is clear, many aspects of the SP policy are not. Inexplicably, in “the initial phase”, SPs are being selected for just four technology segments: fighters, helicopters, submarines and tanks. This dilutes the Aatre recommendations that SPs be chosen for ten designated technology realms – one each for building aircraft, helicopters, aero engines, guns, submarines, warships and armoured vehicles; and two SPs each for manufacturing metallic material and alloys; non-metallic materials; and ammunition, including smart munitions.

Given that companies applying to become SPs are required to state, in order of preference, which technology segments they would prefer, there is confusion over the SP Policy being restricted to just four segments. “Which segments will SPs be chosen for subsequently? We don’t know. If our core strength is warship building, should we not apply for the four currently designated technology segments? If we do apply now and are chosen as SP for submarine building, will we become ineligible for SP status in warship building, if that comes up later?” asks the CEO of an aspiring SP company.

“Not only is the promulgated SP policy incomplete, the defence ministry is now issuing verbal clarifications that contradict its own policy”, says another CEO.

The selection of SPs only decides which Indian firm will lead the manufacture of a particular defence platform. Alongside that, a separate competitive selection process is undertaken to shortlist vendors who make weaponry that meets the military’s “minimum qualification criteria”. The qualified SPs are then required to submit sale-cum-manufacturing proposals based on technology supplied by these OEMs.

Some prospective OEMs, however, have tired of waiting for the defence ministry to complete its cumbersome processes. Both the putative OEMs in the Indian Air Force’s forthcoming procurement of single-engine fighters – Saab of Sweden and US giant, Lockheed Martin – have gone ahead and formed partnerships with the Adani Group and Tata Advanced Systems Ltd (TASL) respectively, even though these companies have not been chosen as SPs.

“Does this mean the foreign vendors and Indian SP aspirants are pre-empting the MoD’s processes? Is the MoD going to allow these pressure tactics?” wonders a public sector chief executive.

Going by the Requests for Information sent out by the defence ministry – for single-engine fighters, submarines and two naval helicopters – indigenization obligations are being pegged at 40 per cent, calculated on a value-add basis as per the Defence Procurement Policy of 2016. OEMs and SPs call this excessively ambitious.

Another challenge is the policy’s requirement for transferring critical technology to the Indian SP. OEMs point out that foreign governments control strategic technologies tightly and approvals may not be readily forthcoming.

Finally, the private industry “In a ‘Buy & Make (Indian)’ category acquisition, the Indian partner decides the foreign partner, and effectively negotiates the price. In the SP policy, the Indian partner is reduced to being the assembly house of a foreign OEM”, says an Indian defence CEO.

In the final balance, some private industrialists believe the SP Policy has been irretrievably diluted by the attempt to placate nervous bureaucrats by replacing a true “strategic partnership” with excessive competition at each stage.

They say the SP Policy is an inferior avatar of the “Buy & Make (Indian)” category of DPP-2016, in which an Indian manufacturer chooses a foreign partner, and effectively negotiates technology and price details.

“In the SP Policy, as it stands, the Indian partner has been reduced to being the assembly house of a foreign OEM”, says an Indian defence CEO.

Excellent article. If the dilution of the Buy & Make(Indian) policy by the Strategic Policy an erosion of its original intent what is the antidote? If it's application is further confused, is it mainly due to bureaucratic nervousness(which I take means fear of future allegations of favoritism)? What is the antidote? Or are you saying the MoD has to simply bite the bullet. Are there any changes/early indications of the direction Ms.Sitharaman intends to take or is she still finding her bearings?

The private sector development will take time. If you look at the companies that are active , these are strong in engineering skills and have plenty of passion. Then management invests. Just hope MoD ensures these Guys get returns and steady orders for a 10-15 years. (Look at the mess created in Arjun project)

We Indians are excellent in talking, discussing and throwing all sorts of ideas while making a project....but, what about implementation, maintening a time frame and taking responsibility to see a project to it's completion? This is where we are a total failure. Too many cooks (and that too bad cooks) spoil the cake.
All civil servants (IAS cadre) assigned to MOD must undergo two years training in military thought, logistics, project implementation, and military hardware production/aquisation etc. Otherwise our woes in this field will never end. We cannot ever expect politicians to learn this.

Ajay this is a question not related to this blog. But I could not restrain myself from asking it here.
What is your take on surgical strike done last year. Do you think that these were fake? I am asking this because I saw this video where you expressed doubts about the surgical strikes having taken place.