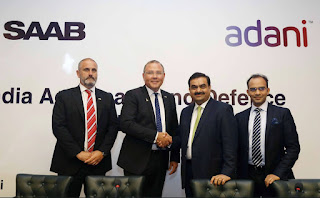 Saab-Adani to take on Lockheed-Tata in fighter contest worth at least $6-8 billion, perhaps twice that sum

In New Delhi on Friday, Saab – a Swedish company that has built more than 5,000 aircraft in its 80-year history – announced a partnership to build the Gripen E fighter with the Adani Group – which has not yet built even a single aerospace component.

The Saab-Adani combine will compete against a Lockheed Martin-Tata Group alliance that was announced in June, to sell the Indian Air Force (IAF) at least 100 single-engine medium fighters. The IAF’s choice appears to be between Saab’s JAS 39E Gripen (or Gripen E), and Lockheed Martin’s F-16 Block 70.

For whoever wins, this would be an immensely lucrative contract. At an estimated $60-80 million per fighter, the money paid out for building 100 fighters will be $6-8 billion (Rs 40,000-50,000 crore). And the number of fighters eventually built could easily top 200, say senior IAF officers.

Addressing a joint press conference in New Delhi, Gautam Adani of the Adani Group and Saab president, Hakan Buskhe justified their partnership in terms of “shared mutual values” and a “commitment to nation building”.

A Saab-Adani Group joint press release today stated: “A collaboration between Saab and Adani will combine the technical and product excellence of Saab, along with the industrial engineering, system integration and mega project execution capabilities of Adani with the intention to manufacture defence systems locally in India.”

But sceptics within the defence and aerospace industry believe the key value the Adani Group brings to the table is its proximity to political decision-makers.

Queried about Adani’s lack of experience in defence manufacture, Ashish Rajvanshi, aerospace and defence head for Adani, pointed out that the “strategic partner” (SP) policy aimed at building such experience in an inexperienced private sector. “Outside HAL and DPSUs, who has design and systems integration experience in fighter aircraft, submarines and helicopters in India?” he said.

Several uncertainties hang over the single-engine fighter acquisition, which is being pursued under the SP policy. The defence ministry must first choose Saab as a qualified “original equipment manufacturer” (OEM); and also select Adani Group as an SP that will build the fighter in India with technology transferred from the OEM.

Saab and Adani Group declined to reveal where the Gripen E assembly line would be set up in India.

While Lockheed Martin has experience in building F-16 assembly lines abroad, notably in Turkey and South Korea, Saab has not yet built fighters abroad. It is currently in the process of establishing a line in Brazil to build the Gripen E.

Buskhe talked up the prospect of exporting Gripen E from the Indian line, claiming that Saab’s internal assessments were that 400-500 fighters would be sold globally, comprising 7-12 per cent of the world’s fighter market.

Asked how many of those would be supplied from India and how many from the existing Swedish line, Buskhe stated there were no plans to expand production in Sweden, so much of the global business would flow to India. “We would definitely export from India for the global market, provided your government thinks that’s a good idea”, he said.

The new Gripen E too is significantly improved over the Gripen D. In addition to advanced sensors and radar, the Gripen E incorporates a more powerful General Electric F-414 engine in place of the GE F-404 engine in earlier Gripen variants. It has also been equipped with electronically scanned Selex Raven-05 radar.

Buskhe stated today: “We started [developing the Gripen E] in 2013, when we were honoured by a contract from the Swedish government and, a year later, from the Brazilian government. In less than four years, we have had our first flight.”

He said Saab would begin delivering the Gripen E to Sweden and Brazil in 2019. In addition, Buskhe cited interest in the Swedish fighter from 5-6 more countries that he declined to name.
Posted by Broadsword at 07:16

So now Mr. Adani will be the harbinger of aerospace technology to India. Tejas Mk-2 with GE-F414 engines -- the same ones in the Gripens he's touting -- can be damned. Great !!
.
.
.
.
If either the Gripen or the F-16 are imported, it would amount to criminal neglect of the Tejas programme, besides sounding the death knell to the spirit of the long-term indigenization goals of India. This criminal conduct is liable to be challenged in the courts, because of the following reasons:

2) It is shocking that the media, whose noses are sniffing for even the slightest whiff of a scam, are so silent on this glaring misdemeanour by the IAF and the MoD. Just as you raised the issue of the Akash being sidelined by the IAF, Col. Shukla, I sincerely hope that you also do an analysis of the Tejas Mk2 vis-a-vis the F-16 and Gripen that are on offer and see why preferring the Tejas Mk-2 would be a better option than importing either of these.

3) It is amply clear that this drama is MMRCA Act 2, Scene 1. This government simply scrapped the previous dispensation's drama (not that it was any good), and has reopened the same contest with a different name, to allow it's cronies like Adani and Ambani to play middlemen and share the spoils. As many have pointed earlier, why can't Adani manufacture Tejas units ? Why the obsession with playing middle-tout for foreign jet makers ? Isn't this an institutionalized Arms Agency ?

I'm beginning to fear that the Tejas will go the Arjun way -- piecemeal orders in favour of equivalent(if not inferior), and costlier imports. Indigenization will take a step back for a few more decades.

TATAs have been making aircraft components for quite some years .
Now they have graduated to making fuselages of American helicopters.
Let us see, this government or previous ones have been doubly careful on deals involving sophisticated equipment.
The system works, a bad deal has always been stalled and exposed !

U are right....make in India is just a slogan... Its about giving adani n ambani orders....

And media is first thing controlled by politicians..
If any political party really cared about indigenization... We would have got indigenous military hardware...its about political will

Our PSUs can work... Provided people in power don't have ulterior motives...