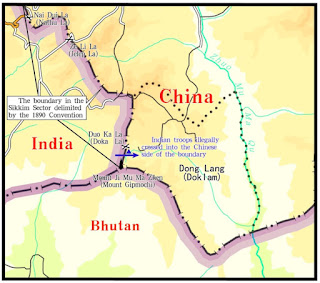 The Chinese map of Doklam, issued on Wednesday, along with their statement

The 45-day confrontation in Doklam has begun de-escalating. Top army sources tell Business Standard that the number of Chinese border guards at the contested border tri-junction between India, China and Bhutan is now down to just 40, from a peak of over 300 at the end of June.

Meanwhile, many Indian troops have also been pulled back. From a peak of almost 400 at the height of the crisis, there are now just 150 Indian soldiers in the contested Doklam bowl. In addition, a full Indian Army brigade, consisting of almost 3,000 troops, stands poised in Indian territory near the tri-junction, ready to respond to any emergency requiring the use of force.

As part of the de-escalation, the Chinese government has issued a lengthy, 15-page statement on Wednesday that uses tough language, but also evinces a new reasonableness. It demands “immediate and unconditional withdrawal” of Indian troops, but innocuously stating that, from “over 400 people at one point, [who] put up three tents and advanced over 180 meters into the Chinese territory… As of the end of July, there were still over 40 Indian border troops and one bulldozer illegally staying in the Chinese territory.”

Business Standard understands that Beijing and New Delhi have reached an understanding to mutually withdraw troops from the contested area, regardless of their public postures.

As this newspaper reported on July 19 (“With Doklam negotiations under way, military believes it has emerged victor”) Indian defence planners calculate that, in a stalemate, such as that emerging from a mutual and simultaneous withdrawal from Doklam, India would have achieved its security aims.

The two-fold aim that India would have achieved includes demonstrating to Beijing New Delhi’s commitment to its security treaty with Bhutan; and keeping the Chinese at arm’s length from the vulnerable Siliguri corridor – a 27-kilometre wide bottleneck that connects the Indo-Gangetic Plain with India’s seven northeastern states.

China’s statement on Wednesday broadly sets out the Chinese claim over Doklam, reiterating what its foreign ministry spokespersons put out at the end of June in their official press interactions.

The statement bases China’s claim on the 1890 Convention Between Great Britain and China Relating to Sikkim and Tibet. It says that “After the founding of the People’s Republic of China and the independence of India, the governments of both countries inherited the 1890 Convention and the delimited China-India boundary in the Sikkim Sector, as established by the Convention.”

This Chinese logic ignores the vital fact that Beijing long regarded Sikkim as an independent country, accepting it as a part of India only in 2003, during Prime Minister Atal Behari Vajpayee’s visit to Beijing. China’s indirect acceptance took the form of a border trade agreement at Nathu La; and, subsequently, the revision of Chinese maps showing Sikkim as a part of India.

The latest Chinese statement also repeats earlier assertions that the Doklam intrusion is “fundamentally different from past frictions between the border troops of the two sides in areas with undelimited boundary”. Beijing asserts that, since the Sikkim sector has an agreed (delimited) boundary (via the 1890 Convention), this “violates China’s sovereignty and territorial integrity…”

Beijing has also cited the United Nations General Assembly Resolution 3314 of December 14, 1974, to rebut New Delhi’s argument that China’s incursion into Doklam had “serious security implications” for India. That resolution, which has been violated repeated in recent years, especially by the US, prevents the violation of international boundaries for any reason, whether political, economic or military.

Ironically, given China’s powerful infrastructure push all along the Sino-Indian border, the statement accuses India of “construct[ing] a large number of infrastructure facilities” in the Doklam area, including on the Indian side of the border, posing “a grave security threat to China.”

The statement also contains a flash of steel, warning that “No country should ever underestimate the resolve of the Chinese government and people to defend China’s territorial sovereignty.” It says “India should immediately and unconditionally withdraw its trespassing border troops back to the Indian side of the boundary”… and “conduct a thorough investigation into the illegal trespass.”

In the final paragraph, the statement evinces a warmth that has been conspicuously absent from Beijing’s hawkish language since the start of the crisis. It says Beijing “always values the growth of good-neighbourly and friendly relations with India and is committed to maintaining peace and tranquillity in the border…”

Resolution of the crisis, says Beijing “would serve the fundamental interests of both countries and go along with the shared expectations of countries in the region and the wider international community.”
Posted by Broadsword at 16:34

Why are about 60 of your soldiers still there a Donglang along with one Bulldozer.
Doval gave assurances that that all Indian soldiers will be out of Chinese territory
Are you waiting till winter to vacate?
Doval was told that China was not intrested in Discussing Donglang with India and demanded immediate withdrawal
All further discussion about the matter will be conducted only with Bhutan.

It makes me wonder why India is lacking aggressiveness in a territory that belongs us. High time for India to make a strong statement at the UN and not take things lying down.