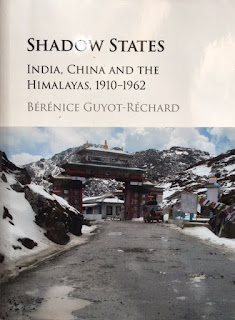 Seventy years after independence, Indian policymakers continue fumbling ineptly in administering our frontiers, resulting in unabated tensions in strategic border states like Jammu & Kashmir (J&K), Manipur and Nagaland. Now here is a book with lessons for our mandarins: A detailed account of how newly-independent India – administratively inexperienced, resource-starved and preoccupied with problems with Pakistan over J&K – established its writ over the North East Frontier Province (NEFA) – today the state of Arunachal Pradesh, peopled by staunchly committed citizens of India.

Why did New Delhi feel the need to quickly consolidate its presence in the wild and unexplored borderlands of the Eastern Himalayas, which the British had largely left alone, categorising it an “Excluded Area”? Since NEFA was a territorial entity not administered by the British colonial state, its accession to India was problematic; New Delhi needed to explicitly exert jurisdiction. But with China simultaneously consolidating its control over Tibet, including its outlying Kham and Amdo areas, the two Asian giants shared a border for the first time in history. The author’s thesis, which runs through the book, is that India and China, in asserting control over their new territories, acted as “shadow states” to each other – with state-making and nation-building playing out as a contest for the allegiance of border people. As she puts it, this “turned into processes of mutual observation, replication and competition to prove themselves the better state – becoming in short, anxiety-fuelled attempts at self-definition against one another.”

Berenice Guyot-Rechard, who teaches history at King’s College, London, has comprehensively mined archives in London, New Delhi, Guwahati and Itanagar and a wealth of primary and secondary sources to tell the story of India’s entry into NEFA. She recounts the halting decision-making, first by the British in pre-1947 India and then by the new Indian state to enter NEFA; the difficulties faced by administrators as they inched into terra incognita, and the constant paring of aims and objectives due to sheer lack of resources. In contrast, China moved with relative authority into Tibet, cajoling, co-opting and coercing the Tibetan people in eventually establishing Beijing’s authority over that vast territory.

Dr Guyot-Rechard postulates that, through these processes of state building, both New Delhi and Beijing were acutely aware of being watched and compared by the border populations who were, given the porous borders, highly mobile and able to switch sides to where they assessed the better opportunities lay. With both sides insecure about the other’s “pull” over the border people, competitive “state shadowing” eventually led to war.

The most interesting chapters describe India’s travails in pushing administration forward to the McMahon Line border, frequently having to backtrack after outrunning material and manpower resources. The author describes the mechanisms that frontier officials established to communicate with the locals – “political interpreters”,  “gaonburas” (headmen) and “dobashis” (interpreters); and the sophisticated ways that locals exploited these conduits to suit their own ends. Ultimately, it was local participation that determined the success or failure of administrative consolidation, since local cooperation was essential for navigating the trackless mountains, finding water sources, obtaining porters, re-supplying posts and a myriad of other functions. As the author put it, “[T]he reach of the Indian state went in many places only so far as the feet and backs of tribal men and women would take it.”

A select cadre of frontier officials that New Delhi specially recruited for NEFA, Nagaland and other border areas, spent weeks “hiking at a snail’s pace around the countryside”. True, but the author – biased, perhaps, by comparison with China’s more purposeful consolidation – is unkind in her descriptions. The speed at which the officials trekked through their jurisdictions indeed constrained the area they could cover. But it gave them a worm’s eye view of the areas they moved through and the time to internalise that unfamiliar environment. India’s establishment of an administration with limited resources and expertise was, at one level, a bumbling, amateurish exercise worthy of ridicule. But it was also a feat of determination that, against all odds, eventually led to success.

Many would regard China as the unquestioned victor in projecting itself in the borderlands as a state – both in establishing a functional administration and, in the ultimate display of state capability, in waging war. Yet, as the author herself notes, the weakness of the Indian state made it more acceptable to NEFA than the all-powerful Chinese state. If, during the 1962 war and in two months of Chinese occupation after fighting ended, Beijing had demonstrated its capability to win and to effectively administer the same area that India had struggled to govern, the local population also figured that they had very little control over what exactly Beijing chose to deliver. The author assesses: “Arguably, [China’s] demonstration of invincibility, impeccable efficiency, and self-sufficiency had been too convincing (italics in original)… The Indian state, by contrast, was fragile and imperfect; but its tensions, its vulnerabilities, its reliance on the population, and perhaps its focus on relief and rehabilitation offered [the local people] more space to negotiate, criticise and make demands.”

Dr Guyot-Rechard’s fine book will be a reference work for all students of Sino-Indian relations. Finely judged and elegantly written, the book is illustrated with numerous photographs of that time and several extremely useful maps. Usefully, footnotes are placed at the bottom of each page, saving the reader the bother of leafing back and forth. My only production complaint is an insufficiently readable font – darker would have been better.
Posted by Broadsword at 19:31

British entry into India's Northern frontiers specially Ladakah and adjoing Northern Areas was gauided by their global empirical imperialist interests whein they had acquired Russia and Soviet union as a new global compititor,. Extension and consolidation of the hold of their administration through various means chiefly communication and security structures over other parts of the country was chiefly guaided by the motives of colonial explotation of the resources and establishment of their markets. Ladakh and northern areas hardly fitted into that scheme spcially after the British had sold those areas to Mharaja of J&K for a consideration of Rs. 75,00,000.
The case of NEFA and many Eastern territories was comparatively worse as there was no threat of the mighty Russion bear spreading its paws there. There was no markets for their goods and no resources to be exploted vaibily except in the vallies of Assam. But for the missionary zeal in dicharging the White Man's Burdon ( read burdon of civilising the pagans through Christianity) there was nothing much there. Hence the begining itself was very much slfish and profit driven and administrayion was in vacume.
So far as Indian authoritie's reach to the entire areas is concened it crawled in proprtion with the number of seats Congress could win to rule Delhi and that too very slowly. That too was mostly taken as granted. The field was left open to missionaries and anglicans and subsequently to the Muslim inflitrators from East Bengal who proved helpful in getting Nehru - Gandies in getting seats for their shaky rule of Delhi. Hence things were left to what ever was there.
No analysis of of NEFA can ever be complete without ill effects of Nehruvian mindset which considered it as a foreign territory to be administred by the MEA cadre Babus (IFS). They never reached anywhere outside or beyond Dhirang / Bomdila. It is not very strange to find that even today, India's elites refuse a posing to Northeast and if unaviodable ask for an allowance as if posted to a hostile foreing lands. It was a share odacity of the Indian Army and Army administered Assam Rifles that they amanged to establish writ of the Babus in all North East by establishing their posts on every prominent hillock, communication junctions cities and towns and along most of jungle trails.
New Delhi's realtions with Northeast post independence can best be described through an incident. When Nehru along with his daughter Indira Gandhi visted Khonsa in Nagaland, the oblivious tribal Chief and Gaon Burha offered him a proposal for peace and a few dozen Mithuns in exchange of the hand of his daughter Indira Gandhi in marriage.

In many areas of Nagaland the situation is far better but that indominable spirit prevails even today.

It's been a great reading of this interesting Book Review by old friend Ajai Shukla. I admire this British author of the Book for her continued interest in India. Britain still needs India. Ajai's review is of the class Ajai belongs - simply superb!

Perceptions are individual matters. I admire the comments and spirit of the 'Anonymous'. It's not difficult for a serviceman to guess that he is a seasoned serviceman himself! His patriotism and criticism of what India has gone through and is going through are remarkable and worth a consideration.
Jai Hind