With Doklam negotiations under way, military believes it has emerged victor 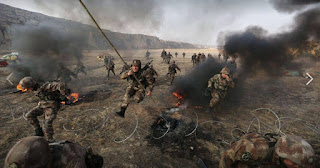 Generals say: "In a stalemate, India will have achieved its aims" (Photo courtesy Global Times)

Senior military officials in New Delhi believe Beijing badly overplayed its hand by heating up the rhetoric over the presence of Indian soldiers in the disputed Doklam bowl, adjoining Sikkim. They say in the stalemate that has emerged, India will have achieved its aims.

The planners say that Indian forces have held the upper hand ever since they surprised Chinese troops by confronting them on behalf of Bhutan, and sticking to their position despite unprecedented aggression and threats from Beijing.

“However this plays out, China is going to lose face, since it has made its threats publicly. And India is going to come out looking like a credible and reliable partner for Bhutan”, says a general, speaking on condition of anonymity.

Asked about the possibility of China’s People’s Liberation Army (PLA) launching military operations against India, as Beijing has hinted, Indian generals are sanguine.

“There is no military mobilisation by China, nor will the Indian military mobilise unless war becomes imminent. If it comes to fighting, we are prepared to shed blood to uphold the India-Bhutan cooperation agreement. That would only raise our credibility in Thimphu’s eyes”, says a senior military planner.

“But that will not happen. The Chinese know they can achieve no military goal. They are smart enough to realise they have miscalculated badly”, he adds.

On Wednesday, Foreign Secretary S Jaishankar admitted to a parliamentary panel that diplomatic negotiations are underway, both in Beijing and New Delhi, to resolve the month-old crisis.

On June 16, after Chinese road construction crews entered Doklam – an 89 square kilometre patch claimed by both Bhutan and China – Indian troops also crossed into Doklam and physically blocked Chinese road construction activity. Since then, hundreds of Indian and Chinese soldiers built up there, deployed eyeball-to-eyeball, initially igniting apprehensions of a shooting war.

Over the past week, however, as diplomatic discussions on de-escalation have moved along, Beijing’s foreign ministry spokespersons and government-controlled media have noticeably toned down the aggressive rhetoric they had earlier adopted.

Until last week, China’s foreign ministry insisted that a unilateral Indian withdrawal from Doklam was “the precondition for any meaningful dialogue between the two sides”. On June 6, Beijing threatened: “We once again urge the Indian side to immediately pull all of the troops that have crossed the boundary back to its own side before the situation gets worse with more serious consequences.”

On Tuesday, however, questioned about a briefing that China’s foreign ministry had given to diplomats in Beijing, a government spokesperson answered more benignly: “People will reach the just conclusion. If Indian wants to achieve its political purposes by sending military personnel across demarcated boundary, China urges India better not to do so.”

China’s media too is noticeably softening its stance from early June, when mouthpieces like the Global Times and Xinhua threatened India with a repeat of the 1962 military defeat. Over the weekend, China Central Television (CCTV) broadcast high-altitude, live fire exercises by a PLA brigade, without mentioning that the drills took place before the Doklam incident began.

This week, articles on the Doklam faceoff have been fewer in number. On Tuesday, after Pakistan’s “Dunya News” – a 24-hour, Urdu language television news channel –concocted news that a Chinese rocket attack in Sikkim had killed more than 150 Indian soldiers, Chinese media dismissed the report as “baseless”.

In India, even as the media keeps the spotlight on Doklam, the government is keeping a level tone. On Wednesday, Foreign Secretary S Jaishankar reportedly told a parliamentary panel that hypernationalism and the media spotlight had inflated the crisis out of proportion.
Posted by Broadsword at 06:46

It would be a mistake to think that this may be the end of it, though.
The Chinese may come in across Depsang, for example, and plonk themselves there to gain leverage.

It could well be the case that nothing further happens in this stand-off. Quite possible. But that was never the foregone conclusion. While it is possible that India had decided to not get into a shooting war, there was/is never a guarantee that China would just not shoot. What else is brinkmanship? The question then is - what are the gains of this risk we took? Are they commensurate with the alternate course of events that could well have played out (and may still do). Impress Bhutan? How important is it to impress Bhutan? How important is to impress ANYONE? Am talking of a country which doesn't have money to look after the education, infrastructure, health and day to day security needs of millions.

What is happening around at international levels and how is the environment shaping up ? Chinese do not do anything without areason and it would be a fallacy to imagine they intruded into Doklam thinking Indians will not react. While Chinese militray misadventure was on, India, USA and Japan were together in Indian Ocean. Modi had just concluded a successful visit to USA securing some favourable deals with them. There is an internal power struggle amongst Chinese laedership, Chinese economy is not faring that well, India openly defied Chinese designs on their old method of expansion of Han inpearism through trade. India has begun competing with China in Asia on many fronts. One is but compelled to comapre at times with situation obtained around 1960 - 62 minus the Cuban crisis.

Indian domestic scene is also very strange. Congress is conducting their own diplomacy and talks throgh Rahul, Priyanka and Vadra, probably guided by Mani Shankar. Mamata is all out to blame every thing wrong in Bengal on BJP and China. Mufty has officially brought Chinese into Kashmir as a party to the conflict. Indian communists have again started their old tricks as they did around 1962. There are people like you who are obscuring issues by subtle smoky discription of the dispute, wrong maps and wrong analysis.

Today, the real skullton tumbled out of China. They blame it on "Hindu Nationlism". (remember it was reactionary Nehru and Western Imerialism in 1960s). Now see how the dots connect everyone - Congress, Muslim - the core constituency of many, J&K, Communist, Mamata, Pakistan and China with that single word - Hindu Nationlism?

So is it Doklam under threat or Hindu Nationlism ? China along with all others mentioned above consider Hindu Nationalism as main thrat to their hegemony. Beawre India - your identity is under grave danger.

“-------- says a general, speaking on condition of anonymity".
By remaining anonymous, the general has ensured that he has the upside of the argument, but not its downside. If things indeed turn out well for India, he would later claim ownership of the statement. If not, who knows who this man is.
Anyone who benefits from both possible tosses of the coin does not have'skin in the game'. Should we give them any credibility?

I feel de javu, wasn't this what indian generals told nehru when nehru implemented aggressive forward policy against China? that China wouldn't do anything? I guess some people never learn.

The author seems to appease his China apologists and Anti Modi readers in the last line. He seems to do that by putting the gun on the shoulder of S. Jaishankar and shooting the messengers reporting Chinese aggression. The words "reportedly told" in the last line of the article suggests the nonconformity and perhaps a false narrative of the writer himself. Otherwise, the article is insightful.

India is a corruption ridden country. It is led by politicians and bureaucrats who plan, execute and drive corruption in all spheres of public life including military life. Don't you know it. Remember Chetwode credo? Does it not apply to our generals? What are they doing about the men they command? They are half politicians. For their own benefit they will have thousands killed. They will of course keep their masters happy. Remember Sunderji? What he did to India? He pumped up R Gandhi so much that people were getting killed all around. Blue Star and Pawan ops are his gifts to india. Did not indira and Rajiv lose their lives as a consequence?
What I am trying to bring out is don't believe in these politicians, bureaucrats and Generals. They will lead this country to disintegration for they are not only corrupt on money front but they are also morally corrupt. Can a person, not corrupt, in the Army go beyond the rank of colonel? You will have to look at corruption from a wider angle.

Another excellent article. I think we need to focus on development.

Look whats happening across the border:

These articles are worth scanning wrt the impact it will have on the next 50 years or so.


There are many people who wonder why Pakistan survives (and now thrives):

Chola
Ps. I am still praying they breakup by 2018.

Any such negotiations is just to buy time. India has to speed up it preparedness and modernisation

Isn't it too early to blow the trumpet.

agreed we have bigger demons to kill but chinese goverment can not be believed they are basically a classic bully ... well and India alwaus does what is not fit for her !we wanted to bring world peace with around 30% literacy rate ..lol ! so we will stand ! thats how India worked historically ... China miscalculates allways one thing in India people perception makes and direvt policy our political system no matter how much corrupt or inefficient it is ...it assures it will remain that way ... if china does not ubderstand that i am afraid this is just a start of a very bitter and scary rivelary that will hamper million of poor people in both countries