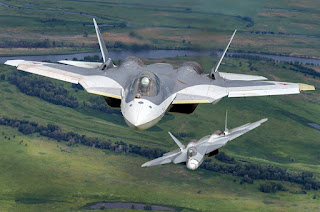 $6.1 billion negotiated for joint R&D; prototypes could be flying in India in 3 years

The decks are clear for the ministry of defence (MoD) to sanction the long-delayed Indo-Russian project to jointly develop a cutting-edge “Fifth Generation Fighter Aircraft” (FGFA).

Business Standard learns that an Experts Group, headed by Air Marshal (Retired) S Varthaman, has submitted a report on July 7, finding that the FGFA project would be beneficial to India.

After MoD bureaucrats objected to the FGFA project on the grounds that it might duplicate, or hinder, the indigenous Advanced Medium Combat Aircraft (AMCA), former defence minister Manohar Parrikar set up the five-person Experts Committee to consider this question.

After deliberating for six months, the Expert Committee has ruled there are no conflict lines between the FGFA and AMCA. In fact, the technological expertise that Indian engineers and designers would gain from working with Russian experts would feed positively into the AMCA project.

Meanwhile, the Defence R&D Organisation, through its subordinate Aeronautical Development Agency, can continue designing the entirely indigenous AMCA – based on its experience in developing the Tejas light fighter.

New Delhi and Moscow signed an Inter-Governmental Agreement (IGA) a decade ago, in October 2007 for Hindustan Aeronautics Ltd (HAL) to partner Russia’s Sukhoi Design Bureau in developing and manufacturing the FGFA. Between 2010-13, HAL and Sukhoi spent $295 million each on a “Preliminary Design” phase.

Now, the two sides are required to sign an “R&D Contract”, which the MoD told parliament on July 5, 2013, would “define the total scope; the work share and responsibilities of each side; and the financial implications of the programme.”

Reliable sources tell Business Standard that India and Russia have negotiated a draft R&D Contract, which commits both sides to spending $6.1 billion on the project –$3.05 billion each.

At least six PAK-FA prototypes are already participating in flight-testing and flying displays, such as at the recent Paris Air Show. The draft R&D Contract commits Sukhoi to build the eighth, ninth and tenth prototypes for flight-testing in HAL, by Indian Air Force (IAF) pilots.

That means that, if the R&D Contract is signed this year, IAF pilots could be testing FGFA prototypes in Indian skies by 2020.

HAL chief, T Suvarna Raju, declined to comment on the Experts Group report, but told Business Standard that an early conclusion of the R&D Contract would allow HAL to play an important role in developing the PAK-FA flying platform into a combat effective FGFA for the IAF.

“If we join now, we will still get a significant part of the work share, thanks to delays in the PAK-FA project. HAL would co-design the avionics, including navigation systems, radars and weapon aiming devices. This is the heart of the fighter’s combat ability”, says Raju.

Delays in the PAK-FA’s development are attributable partly to hitches in designing a new, powerful engine that would let the fighter “super-cruise”, or travel at supersonic speeds on “dry thrust”, without engaging its fuel-guzzling afterburners. While engine-maker NPO Saturn has struggled to perfect a secretive new engine, dubbed the Izdeliye 30, the PAK-FA has been flying with the relatively underpowered AL-41FI engine – an uprated version of the Sukhoi-30MKI’s AL-31 engine.

However, at the Paris Air Show in July, Russian designers have claimed that the PAK-FA’s new engine would be ready to fly by December.

For the IAF, the FGFA project opens up the assured development of heavy fighters that will succeed the Sukhoi-30MKI, many of which have already completed 15-17 years in operational service. In the medium fighter category, the IAF would have two Rafale squadrons, possibly three if a follow up contract is signed for an extra squadron; and also three upgraded Mirage-2000 squadrons. In the light fighter category, there will be four squadrons of Tejas Mark 1A, and another light fighter for which procurement has been initiated. Amongst the contenders are the Swedish Saab Gripen E, and Lockheed Martin’s F-16 Block 70.

The FGFA is equally crucial for HAL’s Nashik plant, which is now building the last 35 Sukhoi-30MKI fighters of the 272 fighters contracted by the IAF. At a build rate of 12 fighters per year, the Sukhoi-30MKI production line will be idle by 2020. It remains unclear how many FGFA units the IAF will eventually buy, but for HAL Nashik, a production order is essential.
Posted by Broadsword at 07:02

One gets a sense that we are trying to meet competing objectives. On one side lie the obvious advantages of standardising on fewer platforms for economies of scale and ease of logistics while the other side is the need to avoid repeating what we did with our submarine program, viz. lose precious expertise by shutting down the HAL production line after 2020. The powers that be seem to prefer the latter course of action though what it does to operational efficiency is an open question. Supporters will of course claim that IAF has always had a fairly heterogeneous inventory but it begs asking whether we have to keep doing it in the future. The other unstated goal I suppose, is to use this procurement to keep Russia firmly on our side strategically which is rather myopic since we no longer need their help on Pakistan and they won't come to our side against China.

All in all a rather sorry state of affairs for our defence posture in general.

What "R&D" do we get to participate in if the aircraft is already flying in air shows? Designing special seats?

A sensible decision. The sukhoi Fifth generation plane has no equivalent in the west nor is AMCA of the same weight class.
So we will have a local,jet in every weight class.
Let us see what jet does navy choose. The existing 45 MiG-29 and to be added 57 will palat a crucial role in the event of future conflict.
Just hope our navy does fly 1 or 2 squadrons of LCA navy to ensure we keep learning , it should help in AMCA navy version. This is how west keeps updating themselves.

What way this a a fifth enervation plane. Just the shape which is stealth with half cooked stealth technology in skin. Third generation engine with marginally increased thrust than AL 31 engine , which cannot do sustained supercruise. It does have super manueverability but with new generation air to air missile that does not make any difference and nobody wants to do dogfight with this plane. The radar technology is old and air to air missile is not reliable. The electronic warfare suite is two generations old. The plane requires extensive repairs and what about the spares and plane availability . The sensor fusion is not yet achieved. All in all like J 20 another fifth generation plane with most of third and fourth generation technology. The heat signature is also not suppressed and Evan a good heat seeking missile can bring it down. I don't know who is getting impressed with this fifth generation plane as I know well what is a fifth generation plane and what technologies are required to achieve that.

It is very great to buy new Gen-5 fighters. It is really very important for our protection and automate lead capture to sale.