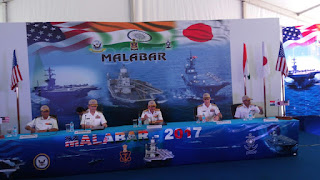 With Indian and Chinese troops locked in confrontation in disputed territory along their border, the Indian Navy is turning out in unprecedented strength in the India-US-Japan naval exercise, Malabar, in the Bay of Bengal from July 10-17.

Nine Indian warships, including aircraft carrier, INS Vikramaditya, and a Kilo-class submarine will join American and Japanese warships in an annual exercise that is all about operational preparation against China’s increasingly aggressive navy.

In the largest-ever Malabar exercise in 2007, 26 warships had taken part, including eight Indian and 13 US Navy warships, two from the so-called Japanese Maritime Self-Defence Force (JMSDF), and two Australian and one Singaporean vessel.

While this year’s Malabar will involve only 17 warships– nine less than 2007 – the Indian Navy will field one warship more than it did that year. In addition, Malabar will witness the participation of 95 aircraft.

After Malabar 2007 (which was held twice that year) China officially conveyed its displeasure, seeking to know whom the defence preparations were directed against.

Beijing resents the coming together in Malabar of what has been termed an “Alliance of Democracies” in Asia. Besides India, Japan and the US, this includes Australia and Singapore.

During Prime Minister Narendra Modi’s first visit to Washington in September 2014, New Delhi and Washington “agreed to upgrade their existing bilateral exercise Malabar”. This was repeated during President Barack Obama’s January 2015 to New Delhi. Despite these intentions, the 2015 and 2016 Malabar exercises involved only four Indian ships. This year, significantly, Indian participation has more than doubled.

Australia has officially sought to participate in Malabar, but this year Canberra will send only an “observer delegation”. In multilateral exercises, observer participation is very often a step towards full-scale participation later.

“Naval co-operation between India, US and Japan epitomises the strong and resilient relationship between the three democracies. The Malabar series of exercises, initiated in 1992 between the Indian and US Navies, have steadily grown in scope, complexity and participation into a multifaceted exercise with the participation of Japanese Maritime Self Defence Force (JMSDF)”, said a defence ministry release today.

The JMSDF will be represented by JS Izumo, a “helicopter carrier” larger than some aircraft carriers, which can operate vertical take off and landing (VTOL) fighters like the F-35B Lightening II. Japan is also fielding the missile destroyer, JS Sazanami.

The exercise will start with a “harbour phase”, involving joint planning, till Thursday. From Friday to next Monday, the “sea phase” will practice the full range of aircraft carrier, surface and submarine operations.

Meanwhile, Indian and US Special Forces and bomb disposal teams will exercise together at the marine commando base, INS Karna, in Visakhapatnam.

“The primary aim of this exercise is to increase interoperability amongst the three navies as well as develop common understanding and procedures for maritime security operations”, stated the defence ministry.

Ah ! So you still oppose the mountain strike corps ?? How the real-time events make a fool of some wise people. The statement that Chinese do have a position with respect to mount Gipmochin is also funny to say the lest as if nothing happened between China Bhutan and India from 1890 till date. The treaty to begin with defines the boundary to follow the watershed - a well established international principle and norm to define boundary in such a terrain as exists there. The water of Doklam flows into Jaldhaka rather than into Tibet. How come the votaries of treaty lay stress on 1890 treaty but coolly ignore Shimla convention. Was not Jalep La and Kerang intruded into by the Chinese earlier violating this sacrosanct treaty?

The title is misleading. All such exercises are planned well in advance !
Expect better from an ex-Army Officer.

No they do not, unless helicopters are counted as "vertical take off/landing fighter aircraft"