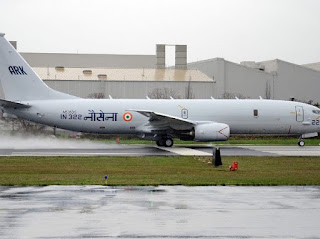 The Indian Navy’s Boeing P-8I long-range maritime patrol aircraft, reputedly the world’s most fearsome submarine hunters, have proved themselves in joint patrols with the US Navy in the Indian Ocean, tracking Chinese submarines.

Last July, a pleased Indian Navy signed a billion-dollar contract with Boeing for four more P-8Is to augment the eight aircraft it already flies. Delivery will begin in 2020.

But, with Chinese submarine activity growing in the Indian Ocean, the navy wants more P-8Is on station today. Last Monday, the navy signed a $100 million contract; requiring Boeing to maintain spare parts and personnel in India, ready to respond to any defects or failures in the P-8I fleet over the next three years.

The so-called “performance based logistics” contract requires Boeing to continue the warranty services it has so far provided under an initial production contract, which will expire in October.

“This contract will substantially bolster Boeing’s performance-based support to the Indian Navy and should maintain or increase the operational capability of the eight-aircraft fleet,” said Boeing on Monday.

Since the P-8I is based on a commercial Boeing 737-800/900 airliner, material support will also be sourced from the Boeing Commercial Aviation Services’ Fleet Services division.

This is yet another lucrative triumph for Boeing, which has won more than $10 billion worth of Indian defence contracts since 2009. Besides $3 billion worth of P-8Is, Boeing won a $4.5 billion contract for ten C-17 Globemaster III transport aircraft, and will soon start delivery of $3 billion contracts to supply 22 AH-64E Apache attack helicopters and 15 CH-47F Chinook heavy lift helicopters.

Despite the navy’s growing reliance on the P-8I fleet, which has replaced ageing Soviet-era maritime patrol aircraft like the Tupolev-142 and Ilyushin-38, the navy’s P-8Is remain handicapped by New Delhi’s reluctance to sign a cooperation pact called the “Communications and Information Security Memorandum of Agreement” (CISMOA).

India’s refusal prevents Washington from providing “CISMOA-controlled” equipment, which would allow Indian and US submarines and P-8 aircraft to operate together smoothly.

To keep track of hostile submarines in the Bay of Bengal, Arabian Sea and Indian Ocean, naval pilots fly their P-8Is on eight-to-ten hour surveillance missions over these waters. To strike enemy warships and submarines, the P-8I carries seven tonnes of weaponry on board, including advanced Harpoon missiles and heavyweight torpedoes.
Posted by Broadsword at 10:55

Is this contract in case we go to war ?

Exactly what is the point of operating the IAF equipment smoothly with the Americans, who clearly are walking back on their security commitments to their current allies and asking their allies to take more responsibility for their own security? Clearly, the Americans have themselves weakened the case for signing CISMOA; infact has strengthened the case for India insisting exemption from the End-User verification agreement signed by the previous government for future buys of American equipment.
India should welcome American equipment and technology; but not in chains.

Instead of buying 10 submarines, we go and buy this crap planes. The US has 70 submarines...they have the luxury of offence...on which they built their defence using the P8. What offensive submarines do we have? 9 kilo class subs which are 15+ years old...

Also...what use is the IAF having for the C-17? What operational doctrine will they fulfill in Indian sub-continent other than flood rescue? Couldn't we have bought 2 extra squadrons of Rafales to beef up our fighter reserves which are depleted beyond hell and need of hour to protect our country.

This is shocking, even more tax payer money going to USA. Now Modi wants to buy even more from the USA, the 40 years old F-16. What happened to the MAKE IN INDIA? Just another slogan.

We should be spending the money on our Jawans, on their food and accommodation. Read the article and the comments by the Kashmiris. Was an eye opener for me, the situation is not as bad a the media in India portrays: