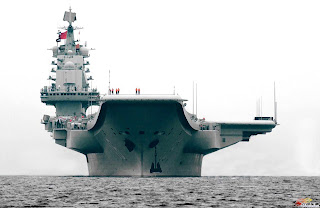 Five years ago, India had two aircraft carriers and China had none. Now, perhaps as early as this month, the People’s Liberation Army (Navy), or PLA(N), will match India in carrier numbers.

However, at alarming speed, another Chinese carrier is coming on stream. Naval analysts believe that, on April 23 – the PLA(N)’s 68th anniversary – its second carrier will be officially launched.

China’s English language media, including People’s Daily, quoted China’s defence ministry spokesperson Wu Qian as stating on Thursday that a date for the launch would be soon be announced, which “won’t keep the public waiting for too long.”

The new carrier is being named Shandong. While the Liaoning is termed a Type 001 carrier, the Shandong will be categorised Type 001A.

After the Shandong’s launch, says China’s defence ministry, it would still have to undergo one-two years of outfitting (of weapons, radars, instruments, etc) and another year of sea trials before joining the PLA(N)’s operational fleet in 2020.

Meanwhile, India’s second carrier, INS Vikrant, being fabricated at Cochin Shipyard Ltd (CSL), has fallen eight years behind schedule. Originally to be delivered in 2015, it is now expected to be fully operational only in 2023, years after China’s second carrier joins the PLA(N) fleet.

Worryingly, the Indian Navy plans to commission a partly operational Vikrant by end-2018, without its “aviation complex” (flight operations control) or LR-SAM anti-ship missiles. That means for some time, maybe years, the Vikrant would lack both strike and defensive capability.

Further, a Comptroller and Auditor General (CAG) report revealed last year that the MiG-29 fighter was “riddled with problems” and that serviceability rates were just 15-35 per cent.

While the Vikrant would have taken 14 years to build from the time its keel was laid in 2009, the Shandong would have taken barely half that time, assuming construction commenced soon after 2012, when the Liaoning finally vacated her berth at the Dalian shipyard.

India, however, does enjoy superiority in its existing carrier. INS Vikramaditya, a 40,000-tonne carrier that embarks 36 aircraft including 26 MiG-29 fighters, is a battle-ready platform. The Liaoning, displacing 55,000-60,000 tonnes, is termed by Beijing as a “training and research vessel” and is not yet assigned to a PLA(N) operational fleet. Even so, it carries a full compliment of 36 fixed wing and rotary wing aircraft, including 24 Shenyang J-15 (modelled on the Sukhoi-33) fighters; and ten helicopters including the Changshe Z-18, Kamov-31 and Harbin Z-9. Last November her political commissar declared the Liaoning was “combat ready”.

The experience of renovating and operating the Liaoning is evident in Shandong’s design. Displacing 65,000 tonnes, it features a ski-jump launch system similar to the Liaoning (as also to the Vikramaditya and Vikrant). However, China’s defence ministry says it “will have more cargo room, more sophisticated radar, more advanced weapons systems and more reliable engines than the Liaoning.”

Like India, China plans to build future carriers with a catapult launch system rather than a ski-jump, which restricts the payload aircraft can take off with. Since they carry less weapons and fuel, fighters operating off a ski-jump carrier have shorter flight ranges and lesser punch.

The PLA(N) carrier that follows Shandong, called the Type 002, would overcome these drawbacks with a catapult launch system. A catapult accelerates aircraft to a higher take-off speed, allowing greater payload and faster launches. It is not clear when the Type 002 would be built, or if it would be nuclear powered.

India’s third carrier, INS Vishal, however, is being planned as a technologically cutting-edge warship with American design features. Like the Type 002, it will have a catapult launch system that equips all US Navy carriers. As Business Standard reported (November 7, 2016 “Navy’s second home-built carrier will be nuclear but will come only in 2030s”) Vishal will feature nuclear propulsion, an “electromagnetic aircraft launch system” (EMALS) and the capacity to embark at least 55 aircraft. It will be built in India and will join the fleet by 2030-35.

Chinese naval strategists say the PLA(N) will eventually operate 5-6 carriers, with two deployed at all times in the Western Pacific and two in the Indian Ocean. Indian naval planners plan on three carriers --- one each based in the eastern and western coasts with a third in reserve for maintenance and repairs.
Posted by Broadsword at 08:10

You need to write why the delay. The steel has been localised, then the locally built gearbox got damaged while being transported.
The new indian navy warship is a totally new design. The missiles are delayed, but will be the most advanced.
So a lot of effort that hone on building industrial infrastructure will be used again later for other ships.

There is no need to compare with china either. I think IN knows what they are doing.

I think in the modern satellite age it is difficult to hide a CBG, hence maybe we are better off investing in maritime reconjisance : drones, satellite and submaries.
Then build long range missiles , a swarm of them should be able to defeat any CBG.

Any indications on how many of the Vishal class are envisaged by the navy in the long term?

I feel we are needlessly losing time while waiting for the design of the Vishal class carrier to be finalized.
The IN should immediately begin work on a 2nd Vikrant class vessel so as to have three operational vessels by 2025, this will in turn buy us time to design and deploy a bigger carrier while giving us the ability to always have two CBGs on patrol while a third lies in refits and maintenance.

The tacit assumption here is that the Chinese AC is coming as "ready for combat deployment" in 2017/18 while the INS Vikrant-when launched in 2018 will miss out on the aviation complex-which will take a year or two to be installed (same as that of Kolkata Class destroyer). Being a experienced defence journo-you should not be making that mistake of assuming that the Chinese AC will be coming is as "ready for combat deployment" as has been the experience with Chinese stealth jets, the WS-10 jet engine to just name a couple. Mind you-these after throwing money like there is no tomorrow on these platforms.

Neways back to your rhetoric...i guess you have some serious appraisal feedback from your editor/sponsor to turn up the drama.

About Chinese carriers , one thing must be noted they still have unreliable engines and they are already loosing few planes due to engine failure. The Chinese carriers can do is sail around South China Sea as those unreliable plane cannot go further than few hundred miles from the coast like vikramaditya. J20 and J 31 have a great stealth shape but lack the coating to block all bands of radar and more so with development of powerful electrooptics and tracking of heat signature it can very easily be tracked and shot down. Both these planes cannot do sustained supercruising and most important part is sensor fusion and that is simply not there and electronics to protect it in hostile territory is lacking and I strongly believe that a carrier with large size is a huge target to aim with supersonic and now hypersonic cruise missiles which can be fired from land , sea , underwater and from air. The range of these missiles is also increased .

I strongly believe that carrier group must have four layered defense. First layer of long range missile upto 300-400 Kms. Anti ballistic missile capability. Second layer of missiles with 100 Kms. Operated on electroopticsenor so that it is immune to radar ECCM blocking , third layer of layer beam which can destroy target upto 30 Kms. And last layer of cliws which can target upto 8-10 Kms. It must also have long range missile which can drop a tarpedo at considerable ranges say about 300 Kms. And planes and helicopters hunting for submarines and with significant range with reliable engines.

I loved YF 23 as it was the best plane to hide its radar as well as infrared signature and had a great speed and unparrelled performance and feel sad it was rejected as F22 has supermanuverability but the issue is no plane would reach close to it to challenge it a dogfight.

One of the identifiable causes that affect indigeneous efforts at developing critical weapons platforms in India is lack of effective contribution from the private sector. For some strange reasons known only to the Almighty, 'defence manufacturing' in India is still being treated only as the preserve of the PSUs with only a token participation from selected private sector entities despite the government's claims. With due respect to the scientists and technoligists in the defence PSUs, these have not been able to attract the best minds from academia for various reasons. Imagine if the defence sector was fully liberalised and 100% participation allowed from the private sector, then we might have had an intense competition between two Indian private (stress on 'private')conglomerates for the best design for a modern aircraft carrier, EMALs et al, a la Lockheed Martin v/s Boeing, with the winner awarded the right to manufacture his design. It would then have been treated as a time bound project with full accountability fixed for completion before CDD. And , we would not have been worrying our heads off over China!

How does a country's Navy then project power without a CBG and its complements?

Thank you for providing useful information