Thoughts on LEMOA: India must abandon the minnow mind-set 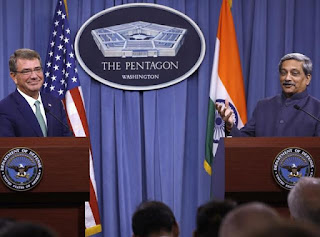 With regard to the recently signed US-India logistics agreement the National Democratic Alliance government appears to have been guided more by the fear of being accused of succumbing to pressure from Washington and less by an evaluation of whether this might benefit India’s military. In this, it is not too dissimilar to the United Progressive Alliance government before it. The key objection, from the Left parties, is that the Logistics Exchange Memorandum of Agreement (LEMOA) would oblige the Indian military to support US forces in imperialist military adventures such as in Iraq. New Delhi’s press release, issued immediately after the agreement was signed, seemed less concerned about describing what LEMOA was than what it was not. It said, “Reciprocal logistic support would be used exclusively during authorized port visits, joint exercises, joint training, and humanitarian assistance and disaster relief efforts.” It pointedly explained that “Logistics support for any other cooperative efforts [i.e. military operations] shall only be provided on a case-by-case basis through prior mutual consent of the Parties [i.e. New Delhi and Washington], consistent with their respective laws, regulations and policies.”

LEMOA has been delayed by years because of numerous safeguard clauses that New Delhi insisted be written into the text. To reassure Indian negotiators, concerned about the standard “logistics support agreement” (LSA) that Washington has signed with dozens of other countries; it was decided to have an India-specific text with the safeguard clauses that New Delhi demanded. To underscore Indian exceptionalism, the agreement was re-named LEMOA. Even so, there has been sharp --- and uninformed --- Indian criticism from across the political spectrum. The political left laments India joining the forces of western imperialism. The extreme right has decried LEMOA as an affront to Russia. And the Congress, with all the non-ideological opportunism of India’s opposition, has slammed LEMOA as “a fundamental departure from India’s time tested policy of ‘strategic military neutrality’.

These criticisms ignore India’s growing international stature and New Delhi’s ability to pursue its interests, without piggybacking on Washington. One impeachment holds that LEMOA would only benefit the globally-deployed American military, while India’s military, which goes nowhere, would benefit in no way from US logistics. But that is not true. During the last year alone, Indian Navy warships have visited 42 ports across the globe. Even if one were to calculate like a retailer rather than a strategist, who has more to offer? A global military with bases (outlets) worldwide; or a regional military centred on the Indian Ocean, where America already has access to numerous bases?

As India’s regional footprint expands, there are good reasons to abandon the strategic insecurity that still hamstrings our thinking. When New Delhi sent relief detachments to Nepal after the 2015 earthquakes, where they worked alongside the US military, the logistics of our helicopter and engineer detachments would have been greatly eased had LEMOA been in place. Similarly, LEMOA enables the quick evacuation of medical emergencies at sea, where time is of the essence. The mind-set that LEMOA would allow foreign military personnel to violate the security of Indian bases is badly out-dated by sub-metre resolution satellite photography.

In order to completely defuse apprehensions about LEMOA, the government would do well to place the agreement in the public domain. It is time for New Delhi to abandon its unseemly defensiveness about the growing Indo-US relationship. In all of India’s relationships, including that with Moscow, there have been ups as well as downs. Yet, the US is held to a different standard. Many Indians have forgotten that, in 1962, when China invaded India, Moscow looked the other way while Washington poured in military support in response to then prime minister Jawaharlal Nehru’s appeal. Today, as a resurgent, militarily powerful India fashions its own relationships with global powers, our political leaders, officials and strategists must abandon the minnow mind-set.
Posted by Broadsword at 10:02

I thought the NDA signed the agreement?? Why the criticism?

We'd live us a complex world, that is more multi polar. We are by and large a pacifist country with expansionist thoughts. Thus process started with nuclear agreement. Am sure the government has keep in mind all the factors & continued the thought process of previous UPA governmeht

"With regard to the recently signed US-India logistics agreement the National Democratic Alliance government appears to have been guided more by the fear of being accused of succumbing to pressure from Washington and less by an evaluation of whether this might benefit India’s military."

Are you even aware of the staggering statistics of "right" leaning folks killed/physically disabled over last 10 years in Kerala, West Bengal and Tamil Nadu put together? Please do research on this and your jaws will drop to the floor.

"The extreme right has decried LEMOA as an affront to Russia. "

Today, as a resurgent, militarily powerful India fashions its own relationships with global powers, our political leaders, officials and strategists must abandon the minnow mind-set.

I think they were over cautious and over justified because a simple pact would be seen as alliance with us. anyways by doing so they still will raise eyebrows amongst some political parties but who cares as these things don't require parliament approvals. above all how many politicians care about defence matters in India? but anyways this is just a beginning and this govt is still new and have to learn a lot on handling such topics.