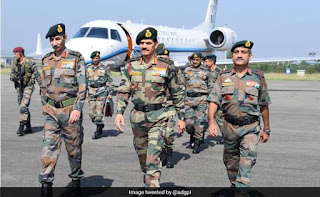 The Indian Army will no longer remain on the sidelines, as the Jammu & Kashmir (J&K) Police and Central Reserve Police Force (CRPF) struggle to manage violent public protests that have swept the Valley since the Hizbul Mujahideen’s commander for South Kashmir, Burhan Wani was killed in an encounter on July 8.

On Friday, army chief, General Dalbir Singh, flew to the Valley to instruct his commanders to ready for operations that would allow the J&K Police and CRPF to reassert control. He also met the J&K governor and the police chief.

In the poisoned political and security environment of the Valley, the army is the lone government entity that enjoys credibility. General Singh asked his commanders to leverage that goodwill to urge calm. According to a defence ministry release today: “[H]e urged the troops to sensitise the people, especially the youth, to eschew violence [and] to usher in peace at the earliest.”

Meanwhile, the army is preparing for the eventuality that violence continues. Over the last week, army units have beefed up presence in South Kashmir. They will now intensify counter terrorism (CT) operations, reasserting dominance over the countryside, by locating and killing militants who have mingled unchecked with pro-azaadi (freedom) crowds for two months.

Over the preceding five years, the army had consciously “reduced its footprint” by vacating towns and large villages, leaving public security to the J&K Police and CRPF. Now, Business Standard learns the army will begin re-occupying “company operating bases” (COBs) in and around towns in South Kashmir.

In 2010, after three summers of violent street protests across the Valley, the army was similarly brought in to re-impose the government’s write where it had ceased to run. After that, the last six years had seen the army withdraw to their bases, vacating civilian areas. Now, the failure of politics has taken the clock back to 2010.

General Singh was briefed today in Headquarters 15 Corps in Srinagar that the army was strengthening its counter-terrorism grid (CT grid) in the Valley, and its counter-infiltration grid (CI grid) along the Line of Control (LoC).

There is a three-pronged strategy for revitalising the CT grid. First, the J&K Police is being brought back to their stations and made effective again. Like at the start of insurgency in 1990, the J&K Police is currently invisible in South Kashmir, where rampaging mobs have torched more than 30 police posts in the last two months. The returning policemen will initially operate alongside the army for protection.

Simultaneously, the CRPF presence is being boosted. In July, soon after violence broke out, 71 additional CRPF companies were flown in to reinforce the existing deployment. Now, an additional 14-20 companies are being thrown into the fray, mostly consisting of units deployed for security during the Amarnath Yatra.

Boosting numbers is crucial, says the CRPF. With large numbers of troopers busy in enforcing curfew and securing the streets of large towns like Srinagar, the additional companies will protect institutions like banks and government buildings and carry out “road opening”, or securing highways and roads for the movement of army convoys.

Third, the army is making itself more visible, reopening posts near the population centres of South Kashmir --- including towns like Anantnag and Bijbehara. Army battalions (850 men) that had contracted into four bases will spread into six bases. This will increase operational flexibility and allow troops to quickly reach flashpoints.

Besides the CT grid, the army chief also inspected the CI grid while visiting army units on the LoC Behind the posts that guard the border fence the army is deployed in layers to block infiltration routes leading towards the towns and villages in the Valley.

Earlier this week, the Hurriyet Conference had snubbed an all-party delegation of parliament members that wanted to hold talks. Yet, back-channel offers for dialogue continue from the state and central governments to separatist leaders, with officials claiming they want to defuse the situation through dialogue rather than confrontation.

Yet, with protests showing no signs of flagging, the government is readying to include military force in its menu of options.
Posted by Broadsword at 19:42

This time the romantic,seemingly intellectual( but not at all one) rhetoric of --a political solution and the GoI should begin talks is simply not going to work.It's obviously a very serious phase where a crackdown such as that exhibited by Pakistan in Balochistan,using the choppers,is necessary.This time round,it seems that the Kashmiris were just waiting for excuses.Kill one criminal/terrorist/militant ,stage violent protests,quell these--stage still more violent protests.The pattern was very obvious.Now the Kashmiri Muslims who are descendants of Iranians,Afghans and some Central Asian barbaric nation should be told to pack their bags,holdall etc.and leave.Only the Pandits who own that place should be allowed to stay there along with us.The congested cities will be much less so.Lot of adjustments have been made.It's just not broken promises since 1947-48 but Azaadi is what they wanted all along.The holier than though "specialist journalists and experts" should be told to shut up.

One of the basic Jobs of Domestic Intelligence agencies is to subvert such separatist movements. These can be done by

1. psuedo gang operations inject your agents
3. promote dissent and propaganda material in the social media against existing separatist leaders from within their ranks and followers.
4. In a careful and coordinated way corrupt the existing puritan, fundamentalist culture there.
- This can be done by emasculation of the youth by simple things like opening up a gym and its local muscle bound owners openly discredit azadi and are pro India or commercial india.
- Invite the youth to a wrestling match, with pro wrestlers who beat them at it senseless and are pro india in their views.
- Start funding alcohol trafficking in the region. The power of alcohol can corrupt the staunchest of patriots motivations, it will wash the separatist tendency of the youth in no time.
- Women can be corrupted with materialism. Make up kits, beauty parlours, body fat shaming for younger women, and furniture and other luxury trappings for the older women.
- have agents pose as young Kashmiri couples (30's) with a lot of money and a beautiful house build a house in separatist areas who worked in India's IT cities and have a great life. The materialism will catch the imagination of parents and they will ensure their kids start believing in the Indian dream.

I have many more ideas, but these are simple ways how an Intelligence agency can subvert an entire culture based on separatism to a culture of liberalism.

The trappings of materialism is how the british subverted our intellectual class, this is how Uncle Sam subverts cultures around the world. Pakistan is doint it with narcotics in Indian Punjab.

I dont understand why our intelligence agencies of India dont do the same. Why do we keep using carrot and stick method. when we can use a Fast food or stick approach.

Corrupt their minds with materialism, rid them of their sense of self respect and confidence and then show them the light. All without a single shot fired. Its that Fing simple.

Indian's would never ever be able to control Liberation Movement in Kashmir, do whatever. It's in their blood since 7 decades, the more piwer you bring in the more furious n fruitful the Independence movement will be. Military had run away 5 years back, let them come back n see them being butured by Kashmiris

So much for repealing AFSPA .. WHY DONT THESE POLITICIANS LISTEN TO THE ARMY FOR A CHANGE.....

So much for repealing AFSPA .. I wonder why don't these politicians listen to the army for a change...

Jamil, you look to remain in fools paradise. Let's not restrict history of Kashmir to past six decades.... It's much older. More soldiers have given their sweat and blood than any civilian there. A misnomer called Azadi has to have a sound reason....you have none. Puritanical thoughts in the veil of religion are not going to work for anyone. It's time that wise sense prevails amongst someignorant people of Kashmir who have been mislead by arm chair strategists attempting to rule the roost from cosy corners of their safe havens.

"Military had run away 5 years back, let them come back n see them being butured by Kashmiris"

Let Paki mofos like you try to enter Kashmir and we'll butcher you instead.

Let's see who runs and who dies

The army is doing the right thing since it is an instrument to fight militants, not insurgency. At the national level though, Modi has got it all wrong, by 180 degrees. Insurgency is weakened by killing enemy but not won by it. Kill ratios do not win insurgency wars, as Gen Westmoreland never understood in Vietnam. An idea is to be replaced by another ides. Here master Modi and his boys/girls are just keeping away from the real issues. He visits Europe more than J&K. ON the international, front though, he tries to fight Pak through his superior influencing and diplomatic skills. There he should be using his armed forces more often. Guy needs a better adviser, not a spook.

Recently I have been to valley .intera
cted with people.They have no mone anf food to survive.They just want good enviorment so that they can sustain themselves.No one wants so called Azadi.They can not voiced their views because of threats from millitant and huriyat people.Most of people are living under fear.They want prrsencse of Army fpr their safety and security.

Hurriyant's money for pelting stones is the worst scenario. pakistani masters are happy what ever problems in india happened. as long as these traitors stay in J and K they will create the problems for getting $$$ from pak., these virus should be eliminated to andaman permanently.