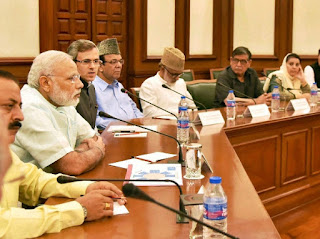 On Monday, Prime Minister (PM) Narendra Modi made it clear that the road from New Delhi to Srinagar will not run through Islamabad.

After 42 days of public violence and separatist demonstrations across the Kashmir Valley, the PM has reached out to the Kashmiri people, directly, but conditionally.

After meeting Jammu & Kashmir (J&K) opposition party leaders in New Delhi today, a statement from the PM’s office said he “emphasized that there has to be dialogue and we need to find a permanent and lasting solution to the [Kashmir] problem within the framework of the Constitution.”

Those six words --- “within the framework of the Constitution” --- rule out territorial give-and-take with Pakistan, or any settlement that changes the boundary, e.g. one based on recognising the Line of Control (LoC) --- the current, de facto border.

Even the J&K Constitution, which came into effect on January 26, 1957, accepts accession to India. Article 3 of that document states: “Relationship of the State with the Union of India:- The State of Jammu and Kashmir is and shall be an integral part of the Union of India.”

The PM’s offer keeps the window open for New Delhi to engage with separatist leaders, but only within the four corners of the constitution. However, the basic separatist demand is “azaadi”, or freedom from India.

It remains unclear what form New Delhi’s outreach towards Kashmir might take, or what its political components might be. However, former J&K chief minister, Omar Abdullah, stated after the meeting that the PM accepted that an economic outreach alone “may not resolve the crisis.”

In contrast to the softening stance towards Kashmiris, the approach towards Pakistan remains unprecedentedly tough. There has been no backtracking from the PM’s speech, made a week ago on Independence Day, which indicated that New Delhi would pin down Pakistan on Pakistan Occupied Kashmir (POK), Gilgit-Baltistan and Baluchistan.

The PMO’s statement today pointedly excluded Pakistan, noting that “those who lost their lives during recent disturbances are part of us, our nation; whether the lives lost are of our youth, security personnel or police, it distresses us.”

Meanwhile, India-Pakistan relations, already vitiated by Islamabad’s sustained criticism of India’s handling of demonstrations in the Valley, are set to plunge further. Islamabad has declared that Prime Minister Nawaz Sharif would forcefully condemn “state terrorism” by India at the 71st session of the United Nations General Assembly (UNGA) on September 20-26 in New York.

Foreign Minister Sushma Swaraj, who will head India’s delegation to the UNGA, is preparing to trenchantly criticise Islamabad’s human rights violations in Baluchistan and Gilgit-Baltistan. She will also highlight Pakistan’s record as a state sponsor of terrorism.

The PM’s national security and foreign policy managers make it clear that, in raising these issues on August 15, the PM has signalled a major Indian policy shift towards Pakistan. “Years of accommodating Pakistan and promoting the dialogue process has gained India nothing. Now New Delhi will play on the front foot”, says one insider.

Over the coming days, it will become clear whether the National Democratic Alliance (NDA) government has shifted from its position --- repeatedly voiced since July 9, when violence erupted a day after popular Hizbul Mujahideen commander, Burhan Wani, was killed by the J&K Police in an encounter in South Kashmir --- that only a handful of Kashmiris were protesting, and that too at Pakistan’s behest.

In fact, numerous media reports have indicated that Kashmiri protesters appear to be acting largely on their own, with no clear leadership discernible.

Home Minister Rajnath Singh first blamed Pakistan on his visit to Srinagar the week after violence broke out; by Modi in his first public pronouncement after a month of rioting; during an all-party meeting a fortnight ago; and, most recently on Sunday, when Finance Minister Arun Jaitley declared at a rally near Jammu that public protests were a “new phase of Pakistan-sponsored war being fought by its stooges.”
Posted by Broadsword at 07:09

You say “Those six words --- “within the framework of the Constitution” --- rule out territorial give-and-take with Pakistan, or any settlement that changes the boundary, e.g. one based on recognising the Line of Control (LoC) --- the current, de facto border.”
Wherein and how does the constitution of India recognises the current ” Line of Control” as the boundary / border of India with Pakistan ? Does it or it is your imagination?. Shimla accord etc do not recognise that as “border/ boundary” but only ‘’Line of Control” (being temporary in nature). India’s boundary / borders are the borders of former Princely state of Jammu and Kashmir which includes the Northern Areas, Gilgil agency and Baltistan. In fact there are Parliamentary resolution to that effect.

Your writings are becoming more of political rhetoric and are very less military expertise in nature.

“Years of accommodating Pakistan and promoting the dialogue process has gained India nothing. Now New Delhi will play on the front foot”

Music to the ears. Let the fun begin! Give back as good as we get!

There are reports that " four districts of south Kashmir -Pulwama, Shopian, Kulgam and Anantnag -have descended into anarchy with hundreds and thousands holding `azadi' rallies almost daily in absence of an effective police force. Out of 36 police stations in these districts, only three -one each in Pulwama, Rajpora and Awantipora -are functioning with any semblance of efficacy .Barring these, all cops have evacuated police stations since frenzied mobs began their attacks, setting a number of these ablaze. Sources said the police department has “for the time being“ shut down dozens of police posts and police stations and started shifting “frightened policemen“.

And you have been arguing for removal of AFSPA from those areas!! Soon the LET anf Jaish backed by the crowd would take control of the National Highway .... and that would be the military mission accomplished.

For you the "Political" dialogue appears to mean all things outside the framework of the Constitution - talks under the shadow of Guns with secessionists, terrorists, Azadi, referendum activists, religious bigots and Paki funded agents .... and of course talk on all demands those are outside the framework of the Constitution and with those who are and have been non political forces !!

Anything in India would do provided it harms Modi - That Mani Shankar Ayyar - Congress line of strategy is so apparent ... for so many years by now.

Either you don't know English or, in your haste to post critical comments, you have failed to understand what I have written.

So what is the difference between what I'm saying and what the Constitution says?

Go and read the article again!

Well if you mean that ... I stand corrected .

Am a kashmiri beseeching with a broken heart that we the population have suffered long and hard due to the paralysis of politics in our state. We have lost our young generation in the conflict and anarchy has loosened in the state again. The greatest tragedy in my memory was the evasion of justice to the shopain rape and murder case. I request on humanitarian grounds, would Indian republic let us live freely and independent from india so that we can chart our future by our own wishes and aspirations. Will they please stop killing our boys for god sake and try to withdraw their foot print from Kashmir and use their Tax to the welfare of their own people rather than injecting 10% of total tax of Indian union in state to keep their puppets (Mainstream Politicians) happy. I haven’t seen more illogical and ill minded people than the current govt at centre and state. If somebody throws some opinion, HM and CM are parroting the same as evident in the case of 95% & 5% by hypocrite Sajad lone and noise made by Haseeb drabu over Kashmiriyat. The govt lacks completely clear policy and mind may be they haven’t got the brains to do so.