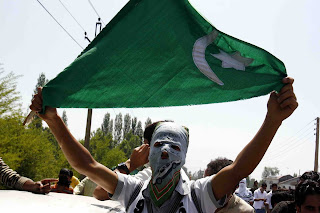 Continuing his discreet silence on China’s iron-fisted control and daily human rights violations in Tibet and Xinjiang, Prime Minister Narendra Modi has signalled he might open a new front against Pakistan. New Delhi is irked at Pakistan’s noisy support of on-going public protests in the Kashmir valley, most recently Pakistani High Commissioner Abdul Basit’s statement in Delhi that his country would dedicate its independence day (August 14th) to Kashmir’s “azaadi” (freedom). Retaliating in his Independence Day speech on Monday, Mr Modi came as close as an Indian leader can to telling Pakistan that two can play at the game of “freedom fighters”; and that if Pakistan supports Kashmir insurgents, India could similarly back separatism in Pakistan. Mr Modi invoked support of “the people of Balochistan, Gilgit, [and] Pakistan Occupied Kashmir”, declaring they had thanked him for highlighting attacks on them by Pakistani people.

There is plenty wrong with Mr Modi’s formulation, not least his categorisation of “Gilgit” (actually Gilgit-Baltistan) as distinct from Pakistan Occupied Kashmir (POK). Since the start of the Kashmir dispute, India has maintained that the Northern Areas (as Gilgit-Baltistan was formerly termed) are an integral part of POK, since both formed part of undivided Jammu & Kashmir. Islamabad, on the other hand, aware of its own unpopularity in Gilgit-Baltistan, has sought to insulate it from the Kashmir dispute --- and, thus, from any future referendum --- by categorically separating Gilgit-Baltistan from POK (which it calls “Azad Kashmir”), even devising separate administrative structures for both. Mr Modi’s speech hewed to Pakistan’s line, not India’s.

More importantly, the timing of Mr Modi’s statement makes it clear that he, like Home Minister Rajnath Singh, continue to believe that unrest in the Valley stems from Pakistani mischief and that Islamabad is squarely behind the current uprising. This has been the National Democratic Alliance (NDA) government’s position from long before Burhan Wani, an icon of Kashmiri militancy, was killed on July 8, sparking violent street protests centred on South Kashmir. This lack of nuance has characterised the NDA’s stance since then --- during Mr Singh’s visit to riot-torn Kashmir last month, when he lashed out at Pakistan; in Mr Modi’s first public pronouncement a full month after the storm began, when he blamed the unrest on a handful of disgruntled youngsters; during the All-Party Meeting last week, when Pakistan and growing Islamic radicalisation were blamed; and now in hinting to Pakistan that India could stoke unrest in that country in an unholy tit-for-tat.

But can India, really? And should India? These two important questions arise from Mr Modi’s implied threat.

We can assume that Pakistan’s gaping internal fault lines --- religious, sectarian, political and ethnic --- provide ample opportunities for Indian intelligence agencies to fish in troubled waters. However, where are the fish? Pakistan has had only one internal conflict so serious that it provided New Delhi with the strategic levers and moral legitimacy to intervene: the ethnic and political discord between East and West Pakistan. Having already midwifed the birth of Bangladesh, India has no easy opportunities to hurt Pakistan seriously and consistently, over a long period. The Kashmir issue simply has no parallel in Pakistan, with its complex combination of historical grievance, ethnic and religious affinity, military conflicts, internationalised profile, including United Nations Security Council resolutions, and bilateral accords like the Shimla Agreement.

True, New Delhi can support the Baluch insurgency, especially financially; Pakistan believes it already does. But that conflict provides only limited opportunities, with Baluch insurgent leaders playing for limited objectives. Yes, Indian intelligence agencies could back Gilgit-Baltistan opposition leaders, but it must be considered whether our support would strengthen them or amount to a kiss of death. Sure, India could operationally support the Pakistani Taliban, in partnership with Afghanistan’s redoubtable intelligence agency, the National Directorate of Security, with which India already shares intelligence. However, there are obvious reasons to steer clear of fomenting cross-border terrorism in Pakistan through ultra-radical, pan-Islamist Wahabbi/Salafi groups that will inevitably turn on their masters. Besides the moral dimension of this, there are lessons in Pakistan’s own experience in this regard.

Instead of focusing single-mindedly on Pakistani support to the Kashmir insurgency --- which is only one dimension of the current turmoil, not even the primary one, and certainly not the one that can be influenced --- New Delhi would do well to address the multiple grievances of our own Kashmiri populace, starting with a political dialogue to begin draining the swamp of resentment. While New Delhi has never hesitated to announce economic packages for Kashmir, there has been a marked lack of confidence in engaging Kashmiris politically. Is this because New Delhi is uncertain how to structure a political dialogue, or whether it would be positively received in the Valley? People who have travelled in Kashmir and spoken to multiple shades of separatists will vouchsafe that there is only upside in a political engagement, even a structurally flawed one. Even the group of interlocutors appointed in October 2010, which separatists rejected as lightweight, did much to calm tensions after three summers of violence. New Delhi must despatch an all-party group of parliamentarians charged with engaging Kashmiri groups from across the political and social spectrum. There need not be proposed solutions on the table, ab initio. For now, New Delhi’s political interlocutors need only listen and report back.

New Delhi hardly needs reminding that it holds the trumps in putting down internal separatism. Yet, Indian commentators have argued that the failure of Great Power intervention in support of self-determination, which has created hotspots of Islamist radicalisation, allows New Delhi a free hand in cracking down in the Valley. They argue: “Cruel as this sounds, images of stone-pelting protestors being tear-gassed and shot evoke less horror in the rest of India and the planet than do visuals of masked young men, dressed in black, carrying AK-47s and promoting a mix of religion and armed rebellion.”

This argument fails to capture what is changing in Kashmir. Despite Burhan Wani’s propaganda videos, fewer and fewer Valley youth are picking up the gun. Were they doing so, New Delhi could rest easy, given its military’s experience and expertise in tackling armed Kashmiri militancy. Further, global and domestic opinion would coalesce behind Indian security crackdowns, howsoever heavy-handed. What is worrying is the growing move towards renouncing the gun and picking up stones in what looks worryingly like a home grown “intifada”. Israel, once admired for standing up to Palestinian armed attacks, today faces sharp attack from former European supporters. Even American support, once a given, is far more qualified.

New Delhi must remember that no country that is putting down protests by unarmed people ever comes up smelling of roses. Kashmir must be addressed across all its dimensions so that it does not come to that point.
Posted by Broadsword at 22:02

Steps for bringing normalcy in kashmir.
1. Remove spl status of kashmir and resettle ppl from all religions and regions to settle there. Similar to what China is doing to tibet.
2. Redirect the anger of kashmiri people on Pakistan for destroying their tourism industry and plundering the water resources without they getting anything in return, make them rebel against indus water treaty.
3. Westernize the younger generation using tv, Internet and bring a cultural revolution such that they would never want to go back to their conservative ideology or be part of talabinized Pakistan.
4. Increase military spending to a level that our GDP can upport and make Pakistan bleed economically and disintegrate like USSR during cold war era.

What exactly should we do in our "Dialogue" with the Kashmiri populace... ??? Don't kill our jawans who are protecting you? Dont chase our Hindu Pandit brethren from Kashmir? What else can we offer to our Kashmiri "brothers" apart from what they already have...??? who BTW time and again sides with the Sick pakistan/separatists...
I am amazed at your use of terms... Now "Terrorism" is replaced with "Militancy"... vow... bravo shukla ji...
You may soon over throw our famous NEW DELHI TELE VISION ELITE....

Remember the mid adventure of Indians in Sri Lanka with #LTTE! We might do the same with #Baluchistan!

Utter nonsense and childish strategy to involve yourself in these matters!

He wen to Red Fort to assuage Kashmiris of J&K (Indian part), but instead started off on Balochistan and POK. As if, that effort of his will help Indian Kashmiris breathe better? The guy needs a coach who tells him about the cause-effect theory. How long will he be allowed to hurt Indian interests for party poltical gains?

Had the Palestinians brutally raped, murdered and ethnically cleansed Jews from their part of Israel, the world would have blessed their wholesale slaughter and subjugation. That mistake of Kashmir Muslims will and must haunt them. No quarter is deserved by these animals.

Now terrorist are "icon"?? Kashmiris get everything , they want still follow "mullahbad".

Ajai, why reduce our potential unacknowledged activities to the lowest denominator of cross border terrorism? Is it unfair to expect the government to dish out the same medicine to Pakistan that the late B.Raman and team did at the height of the Khalistan movement? To assume that Pakistan has no parallel to Kashmir, I am afraid, is a lazy statement. Baluchistan is where Kashmir was in the late 70s and early eighties. We know that it led to 1989 and has unfortunately continued ever since. Like Barkha Dutt facetiously starting every conversation on Pakistan stating that war is not an option, you seem to empirically rule out any intelligence operation. Are you suggesting that we wring our hands and keep our sub-conventional arsenal empty?

However, I completely agree with you on domestic handling of Kashmir. The lack of political engagement and demilitarisation that should have happened during times of relative peace is appalling. Our polity in Delhi and Srinagar are to blame, more so the parties in power. Engagement need not mean pandering to Pan-Islamic proponents like Geelani or Andrabi but ensuring that a common Kashmiri is treated like a common Haryanvi or a Tamilian is in the rest of the country. We don't need busybodies like Amnesty to tell us something this simple.

Kashmir has seen the biggest ethnic cleansng since independent india. Pray, let us know why are you not writing on it ?