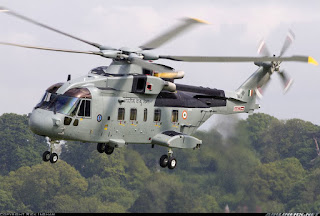 The ministry of defence (MoD) has fired the latest shot in an escalating war of words between the Congress and the Bharatiya Janata Party (BJP) over corruption in the purchase of twelve AW-101 helicopters in February 2010 for top Indian political leaders, from Anglo-Italian firm, AgustaWestland International Limited (AWIL) for Euro 556 million (currently Rs 4,195 crore).

On Thursday, the MoD stated: “The contract for supply of 12 helicopters signed with AWIL on 8th February 2010 was terminated with effect from 1st January 2014 (i.e. by the Congress-led government)… However, the company was not debarred by the said order. Various bonds and bank guarantees were invoked.”

The MoD further claims “It is the present Government which through its order dated 03 July 2014, put on hold all procurement/acquisition cases in the pipeline of six companies figuring in the FIR registered by the CBI, namely: M/s Agusta Westland International Ltd., UK, M/s Finmeccanica, Italy and its group of companies… No new capital procurement has been made thereafter from these companies in the tenure of the present Government.”

On December 12, 2014, at a conclave in New Delhi organized by the Aaj Tak TV channel, Parrikar decried the notion of blacklisting foreign violators, instead recommending punitive monetary penalties.

Citing Finmeccanica, Parrikar pointed out that many of its 39 group companies were involved in crucial contracts with India. “Should we rule ourselves out of dealing with all of those 39 subsidiaries? There has to be a clear policy on that,” said the defence minister.

Parrikar’s predecessor as defence minister, Arun Jaitley, followed an identical approach to blacklisting. As Business Standard reported (“Ministry of Defence reconsidering blacklisting policy”, August 23, 2014), Jaitley said on blacklisting: “We have to balance between two competing public interests. One public interest is that contracts are meant to be abided with, and not violated, even by our suppliers. The other competing interest is the larger public interest in terms of our national security and defence preparedness. It is an issue that we are fully seized of and we are in the process of finding an answer to this and you will hear about this from us very soon”, said Jaitley.

The blacklisting norms that the government eventually promulgated in August 2015 did not blacklist Finmeccanica, instead taking a differentiated approach to its group companies --- which include marine specialist, WASS; Selex Electronics Systems; aircraft firm, Alenia Aeromacchi, and naval gun maker, Otomelara.

Also contested is the naming by an Italian court of former Indian Air Force (IAF) boss, Air Chief Marshal SP Tyagi, as the recipient of bribes to change the specifications of the VVIP helicopter. The initial IAF tender, floated in 2002, required the chopper to operate up to altitudes of 6,000 metres, which was higher than the service ceiling of the AgustaWestland helicopter. The Italian court alleges that Tyagi did AgustaWestland a favour by having the service ceiling lowered, making the AW-101 helicopter eligible for the IAF tender.

In fact, according to a detailed MoD release dated February 14, 2013, the decision to lower the service ceiling was taken on the orders of Brajesh Mishra, Principle Secretary to then prime minister, Atal Behari Vajpayee, at a meeting in November 2003. Mishra also directed that the prime minister’s office and the Special Protection Group (which is responsible for VVIP security) be brought into the decision making process.

Tyagi became a part of the decision making more than a year later, when he took over as IAF chief in December 2004.
Posted by Broadsword at 04:59

This helicopter ( or it's variants) is used by the US & russian presidents. It is good.So we should not mix up quality of helicopters with politics. This looks another Bofors ( wish we had a few hundred of these during Kargil)
Punish the wrong doers, make it clear to the world professionals are allowed freedom to do their job, involving politicians does not help.
The system will get cleaned up.

What I find absurd is that just because one government took a decision to lower the ceiling height what stopped the next one to review that decision? Simply carrying forward the decision obviously means UPA did not apply it's mind. Anyways all that matters is who signed the deal. it cannot be the case that UPA signed and NDA got the money. Obviously it cannot also be the case that IAF officers got bribed and the political establishment and bureaucrats were left out. pity is that anyways in our country clearing a deal takes years so we are now back to square one and it will be next decade before the actual vvip helicopters will arrive that too if someone starts the process now. to be honest best way out is make all deals government to government. this way no need for any middlemen or agents and at least bribes will be ruled out at the cost of slightly higher deal contract amount.

Tyagi ji is knee deep in this one. Multiple meetings in Italy have been confirmed. Looking forward to your piece on this and implications for the IAF and armed forces in general.

The key point is not that bribes were paid. That's a given.

The decision to reduce the ceiling height is criminal. PM's till that time had travelled to Siachen, in particular George Fernandes. That is 5500 meters.

Even by reducing the ceiling height to 4500 and increasing the cabin height to 1.8 meters, there was still a single vendor in the bucket. This is still illegal as per defence procurement rules.

And don't attempt to whitewash Brajesh because he's dead. He leaked secretly recorded info b/w musharraf and terrorists during kargil to the US. They plugged the ability to record such talk.

He's actually of tainted blood. His father Dwaraka Mishra arranged for the killing of the last king of Bastar. I forget his name. Deo something. He was also an MP and fighting the mining mafia.

In 2012, Antony got an email from Edmonds Allen (president of Ganton Ltd, one of the path smoothing companies) that internal secret defence discussions were in fact public discussions.

As proof he had attached 8 (eight) secret military documents including:
- papers dealing with the procurement of surveillance aircraft for the Research and Analysis Wing
- a report on the procurement of next generation submarines for the Indian Navy
- entire acquisition plan of the Indian Air Force

The govt. got the documents verified by the Government Examiner of Questioned Documents. It was authentic.

An investigation was started by CBI and ED. They lost interest somehow. Perhaps an excess of Italian Pasta was fed.


The problems are being created by and for the TATA group also. Indian Rotorcraft Ltd, a joint venture between Tata Sons and AgustaWestland was established for the AW119 helicopters. Now that will go for a hit wicket.

The rest is known to all. To me the leak of defence documents is the high priority item that we need to investigate and solve ASAP.

Let the bribe givers and takers all enjoy. They're children will suffer. So leave it.