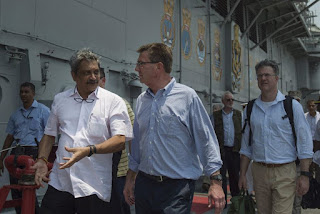 A slew of announcements after Tuesday’s meeting in New Delhi between the US and Indian defence secretaries --- Ashton Carter and Manohar Parrikar --- have sought to create a glow of unalloyed success around the US-India defence relationship.

But a look at the outcome of earlier US-India announcements, including those made during President Barack Obama’s visit to India in January 2015, provides a sobering dose of reality.

Tuesday’s announcements include an “in principle” agreement to quickly conclude a long-delayed logistics agreement; joint development of defence equipment; deepening consultations for designing India’s aircraft carrier and an advanced jet engine; cooperating on submarine operations, and safeguarding maritime security in the Asia-Pacific.

In fact, US officials are disappointed that an India-specific logistics agreement, entitled “Logistics Exchange Memorandum of Agreement (LEMOA)” was not formally signed during Carter’s visit, even though New Delhi and Washington had agreed on all its clauses. The US Department of Defence (Pentagon) now realises that the National Democratic Alliance --- like the United Progressive Alliance government --- is wary of the political risks of alignment with America.

New Delhi's cautious approach to the LEMOA --- first signing an in-principle agreement, and then inking the deal later after gauging the political fallout ---portends slow progress in concluding the other two “foundational agreements”: a Communications and Information Security Memorandum of Agreement (CISMOA) that would allow Washington to release secure radio equipment to India; and the Basic Exchange and Cooperation Agreement for Geospatial Information and Services Cooperation (BECA), on digital mapping and survey.

Carter, who has relentlessly pushed the US-India defence relationship, put a brave face on this, telling NDTV on Tuesday: “I think, over time, [the foundational agreements] will all be concluded. I want to emphasize there’s a lot we can do without them; but there’s much more we can do with them.”

The announcement of two US-India “pathfinder projects” to co-develop a Digital Helmet Mounted Display; and a Joint Biological Tactical Detection System, is unlikely to yield products in a hurry, going by the tardy progress on four “pathfinder projects” identified during Obama’s January 2015 visit.

Of those, New Delhi and Washington are still deciding on industrial partners for two products --- the “Cheel” micro-drone that infantrymen could launch for battlefield surveillance; and roll-on, roll-off kits for the C-130J Super Hercules transport aircraft, which are essentially quick-change aircraft interiors for varied missions like para-dropping, cargo-carrying and medical evacuation. The other two --- a mobile, electric hybrid power source (MEHPS); and protective clothing for soldiers in nuclear, chemical or biologically contaminated battlefields --- which will be co-developed by military agencies, it took India seven months to decide on its development agency.

Pathfinder projects are of two types: those proposed by industry, and others proposed by the military. The MEHPS was proposed by the US Marine Corps, and is being co-developed with India’s Defence R&D Organisation. Both the projects proposed during Carter’s visit are military proposals. The US Air Force will co-lead the digital helmet project, while the US Army will co-lead the biological detection system. It remains to be soon how quickly New Delhi selects the Indian agencies.

Similarly, there is little to report on the two major DTTI projects initiated during Obama’s visit in January 2015: on US design assistance for India’s next aircraft carrier; and in co-developing an advanced fighter jet engine. Carter and Parrikar have merely resolved to “deepen consultations” on these projects.

Senior New Delhi officials tell Business Standard there is little chance that India will equip its aircraft carrier with the futuristic, electro-magnetic aircraft launch system (EMALS) that the US is only now fitting on its carriers. Choosing EMALS would logically lead the Indian Navy to American carrier-based aircraft like the F/A-18E/F Super Hornet, but New Delhi planners have decided EMALS is untested, expensive, power-intensive (requiring a nuclear-powered vessel), and provides a rapid aircraft launch capability beyond what the Indian Navy needs.

Even if India chooses a conventional steam catapult for launching aircraft, it would open the doors for US aircraft like the Super Hornet. But there was no announcement on the proposal to build these fighters in India, which US officials had talked up before Carter’s visit.

Similarly, Carter’s and Parrikar’s announced support for freedom of navigation in the South China Sea was only an echo of the “India-US Joint Strategic Vision for the Asia-Pacific and Indian Ocean Region” that Obama and Modi signed in 2015. What took that forward, however, was the announcement of a bilateral Maritime Security Dialogue between both countries’ defence and foreign ministries.

India has clearly gained from the agreement “to commence navy-to-navy discussions on submarine safety and anti-submarine warfare.” It is learnt that the trilateral Exercise Malabar scheduled for June, featuring the US, Japan and India, would have a major submarine component. For last year’s Malabar, the US had sent a Los Angeles-class nuclear submarine, while India fielded a Kilo-class diesel-electric boat. Analysts say the next Malabar could feature Japan’s vaunted Soryu-class submarines, which it hopes to sell India.

Conservative commentators, such as Bharat Karnad, speculate that deepening relations with the US, specifically the signing of CISMOA, would offend Moscow, causing it to cancel the ongoing lease to India of an Akula II-class nuclear submarine, the planned lease of a second nuclear submarine, and the sale of other high-technology weaponry.

However, authoritative Russian sources tell Business Standard that Indo-US submarine cooperation would not impact relations with Russia “significantly or dramatically”, especially with regard to weapons platforms “already provided or offered to India”.

Another major plus for the Indian Navy is the US entry into the “white shipping” technical arrangement. This Indian initiative for “maritime domain awareness” involves partner countries informing New Delhi in real-time about their merchant shipping transiting through the Indian Ocean sea lanes. Six countries are already on board --- Sri Lanka, Thailand, Australia, Singapore, Mauritius and Seychelles. Navy spokespersons say that figure is likely to rise to 27 soon.

Those who sit on the fence are doomed

What are we getting in return? America has not committed any ToT which would be useful to our MIC. So, they were selling us intentions, so we also paid with intentions. Things will move when USA comes with consequential and real deals.

Thank you for another precisely informative article as always.

One comment, I read somewhere that the Indian Navy's requirement for CATOBAR or EMALS was to have the ability to land and Launch heavier AWACS type aircraft, while at sea.

If I understand correctly, at present India's AWACS capability is only available uptil a certain distance from the Indian coast line and its on station time is therefore for a limited time.

However, with a Catapult launch AWACS can be launched from the carrier itself regardless of how far away it is from an airstrip. Giving India a rare blue water capability.

Perhaps with new LEMOA, Indian AWACS aircraft will have more places to take off and land, thereby eliminating the need of a catapult.

I don't know why the IN doesn't investigate maglev for launching aircraft. It would be a superior option to the US EMALS, and leverages off the shelf technology that will be available indigenously from Japan Railways.

Even if the US won't offer a technology doesn't mean we can't purchase a superior option from elsewhere.