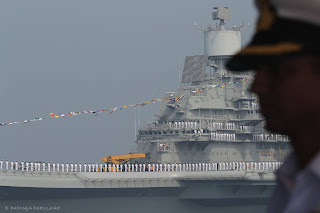 Once in each president’s five-year term in office, he or she carries out a “naval fleet review”, a deliberately public assembly of the entire fleet, except for warships on essential patrols. Behind the ceremonial pomp and show lies a simple strategic signal: “Here is our fleet; it is ready for war.”

In earlier days, fleet reviews were “a prelude to war or an explicit show of force to deter adventurism by a potential adversary”, says Raghavendra Mishra of the National Maritime Foundation. Possibly the first ever fleet review was held in 1415, when British monarch, Henry the Vth, inspected his navy before embarking on war with France.

The Indian Navy, however, waves away the notion of sinister purpose behind the International Fleet Review (IFR) that begins in Visakhapatnam on Thursday, and continues for five days through Monday (February 4-8).

“The idea of a Review was perhaps conceived as a show of naval might or an inspection of readiness for battle at sea. It still has the same connotation, but assembling of warships without any belligerent intentions is now the norm in modern times”, says the IFR’s official website.

Amongst the 54 navies taking part, there is a tacit acceptance of this regional primacy, and a shared belief that this is in the common interest. Participating this year is practically every major navy in the world, including the People’s Liberation Army (Navy) of China.

“54 navies are participating this year, compared to 29 in 2001; and 24 foreign warships are here, exactly the same number as in 2001. During the review, 24 foreign naval chiefs are visiting Visakhapatnam, and some 4,000 foreign sailors”, says the navy’s spokesperson.

In addition, 75 Indian warships will participate in the review. These include both the navy’s aircraft carriers, INS Vikramaditya and Virat, and almost all its major capital warships --- destroyers, frigates and corvettes.

The Pakistan Navy is not participating. The navy spokesperson said an invitation had been sent to Islamabad through diplomatic channels, but evoked no response.

The main event will be the presidential fleet review on Saturday morning. President Pranab Mukherjee will receive a ceremonial 21-gun salute and a guard of honour before boarding the Presidential Yacht. He will then review the warships, weaving between them as they remain anchored to their precisely determined spots in the sea off Visakhapatnam harbour. Each ship will have their crew on the deck in spotless white uniforms, presenting a salutation as the president passes.

Along the way, the President will witness operational demonstration, including a daring display by marine commandoes, and a “steam-past” by a detachment of warships.

For the residents of Visakhapatnam, there will be a concert by foreign navy bands on Saturday, and a city parade on Sunday along the seafront RK Beach Road. This will feature naval operational demonstrations, marching contingents from visiting navies, and cultural displays by visiting sailors.
Posted by Broadsword at 08:07

What would the Pakistan Navy send? 40 year old frigates? Small missile boats that would be laughed at?

The IFR should be used to promote export of Indian made ships for other navies of the world. This is the best method of achieving the exports target set by the RM.

International Fleet Inspection was such a good show with so much successful indigenous vessels and products.
I may be allowed to express my sentiments that after participation of Baharain Airshow, it was expected that LCA, Tejas will participate in the Republic Day Fly Past. The absence of the aircraft in the Republic Day parade was a real disappointment.
May I appeal to the Prime Minister of India for his personal intervention for immediate induction of the indigenous aircraft after granting it FOC. This aircraft has the capability of bringing huge value to Indian economy apart from making India a major airpower of the world.
I also appeal to Hon'ble PM to advise the ministry of Finance for dis-investment of Defence PSUs for improving their economy and unlocking their values for faster development. This simple action will go a long way in removal of property in India.

Yeah,buddy - I doubt the PM reads comments sections on blogs to set his policy aims.