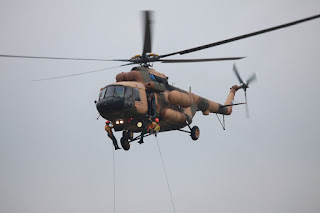 The predominantly Soviet and Russian weaponry that India’s military fired, flew and sailed since the late 1970s has gradually made way for equipment from the United States, France, the UK and, now, even Israel. Yet, in the field of helicopters, Russia reigns supreme.

With these delivered, the Russian Helicopters plant in Kazan is gearing up for another impending $1.1 billion contract for supplying 48 more Mi-17V-5 helicopters to the Indian Air Force (IAF).

Meanwhile, in December 2015, Prime Minister Narendra Modi and President Vladimir Putin agreed that Russian Helicopters would build and supply at least 200 Kamov-226T light helicopters for India. That contract is currently being negotiated.

Last year, for the first time, India signed contracts worth $3 billion for American helicopters --- including 22 AH-64E Apache attack helicopters and 15 CH-47F Chinook multi-mission heavy lift helicopters. These would be delivered over the next three years.

Even so, in terms of sheer numbers, Russian Mi-series helicopters have always been the backbone of the IAF chopper fleet. Starting from the 1960s, the IAF bought 110 Mi-4 helicopters, then 128 Mi-8, and finally 160 Mi-17s, totalling up to almost 400 helicopters. In addition, the IAF will now operate almost 200 Mi-17V-5s.

India also bought one squadron of the heavy-lift Mi-26 helicopter, which will soon be replaced by the Chinook CH-47F. The IAF also operated two squadrons of Mi-25 and Mi-35 attack helicopters, which the Apache AH-64E will replace.

Besides the IAF, the Indian Navy has also been a big user of Russian Helicopters. A range of naval warships, including the new aircraft carrier, INS Vikramaditya, embarks the Kamov-28 and Kamov-31 helicopters, which carry out anti-submarine operations and airborne early warning respectively.

The Mi-17V-5, is a more powerful version of the Mi-17 that entered service in the 1980s, with better avionics and night flying ability. The new helicopter is being used to transport troops; supply Indian army outposts on the remote Himalayan border that are unconnected by road, and even transport VIPs.

Russian Helicopters flies in the Mi-17V-5 in ready-to-assemble kits, and Indian technicians put them together at the IAF depot in Chandigarh.
Posted by Broadsword at 17:26

At least IAF choppers are of common types (for now)... dont understand why does IAF have so many different types of fighters though? imagine the cost of maintaining such a varied fleet!!.. Its like maintaining a pack of rottweilers(Rafale), pitbulls(Su-30), dobermen(Mig-29), labs(Mirage), pomeranians(Mig-21) and chihuahuas(LCA)... But sure they are going to mess up the other dogs on the other side of the fence :D

Slowly shift will be for assets for fighting from sources other than Russia . e.g. Apache . I will not be surprised if an assembling line is started in India .