No Rafale deal unless price is right: Parrikar 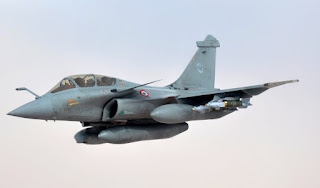 Defence Minister Manohar Parrikar bluntly stated on Thursday that negotiations for buying 36 Rafale fighters from French aerospace vendor, Dassault, were deadlocked on the issue of price, and that no deal would be signed until the price was right.

Well-informed defence ministry sources that are close to the negotiation say there is a wide gulf between the two sides. “The difference between what France is demanding and what India is willing to pay is too large to bridge easily --- about 25 per cent.”

Parrikar told India Today TV: “Price is the problem which has to be resolved. Unless I get the right price, I cannot sign.”

Debunking recent media articles that a deal was imminent, most recently in Hindustan Times on February 11, Parrikar said ironing out the remaining issues would take “a few months”.

Pressed on the question of time-frame, Parrikar responded: “You can’t commit yourself to a time, because this is not a negotiation for a few hundred crores. This is thousands of crores. I should not… put a time line on my price negotiation.”

On January 25, during his visit to Delhi, French President Francois Hollande declared after signing an inter-governmental agreement for the supply of 36 Rafales, “There are some financial issues that will be sorted out in a couple of days…” It now appears he may have been speaking figuratively.

On January 27, French ambassador to New Delhi, Francois Richier, put a deadline of four months for the price to be negotiated.

Today, Parrikar also confirmed that India had demanded offsets worth 50 per cent of the deal value, and that Dassault had agreed to that condition.

The defence minister denied that the window was open for buying more Rafale fighters, beyond the 36 being currently negotiated. “As of now, the negotiation is for 36 (fighters). There are many possibilities, but this deal is for 36”, he said.

When Prime Minister Narendra Modi, on a visit to Paris last April, requested for 36 Rafales, New Delhi and had Paris agreed the price would be less than what Dassault had quoted in response to the Indian tender of 2007 for 126 medium multi-role combat aircraft (MMRCA). Of those 126 fighters, the first 18 were to be supplied in “flyaway condition”, i.e. fully built. Since 36 Rafales are now being bought in “flyaway condition”, their per-piece price must be lower than what Dassault quoted for those 18 fighters.

The Indian Air Force had chosen the Rafale on January 31, 2012, in India’s tender for 126 MMRCA aircraft. However, in protracted price negotiations that followed, the defence ministry found problems in Dassault’s financial bid. Eventually, Modi chose to abandon the MMRCA tender, and instead buy 36 Rafales over-the-counter.
Posted by Broadsword at 09:12

At this price it is too high. Better to go for new SU30 order for this price.

Cancel the deal and do a G2G for F16 in far bigger numbers with Make In India. The avionics and weapons pakcage will more than compensate for the older airframe.

France needs to realize that it does not bring to the table the geopolitical heft someone like US or a even a severely deflated Russia brings to the table with their deals. When Modi offered to purchase 36 Rafales in fly away condition (compared to 18 under TOT); it was India's opening gambit on the TOT; not an act of desperation to boost IAF's dwindling strength. If the French intend to win this deal; their terms need to be far sweeter than any offered by a Boeing for F-18 manufacture in India or even by Russia on FGFA. If India can truncate a total order of 126 Rafales to 36; then they can curtail it down further to zero. Even with the current deal, as I understand, Thales has been snubbed on the AESA radar with India opting for Raytheon(?). The prices Dassault was able to command with the Mirage 2000N purchase & upgrades are no longer available today in what it essentially a buyer's market. This is France's deal to lose; and it seems they are all set to do so!

Ajai as always you have got the facts and figures.
Well articulated.

This deal is looking harder and harder to justify. If one looks at timelines for delivery, cost, benefits in terms of tech transfer, there is no justification any longer to take this deal further. Buy more Sukhoi's, and LCA. The IAF refusal to back make in India is now coming back to bite it

I trust the right decision is taken from these comments.

The Govt.should scrap this deal of buying Rafale and instead go for domestic
production of F-16 to shore up numbers so as to replace scores of Migs.Lockheed Martin
would easily provide
off the shelf jets in 3-4 yrs and make in India programme would follow later .

Wow, One can buy 2 F-22 raptors for the cost of 3 Rafales at this price. How is it this expensive? Furthermore, what role does this fill?

Upgrade of Su-30 with better avionics, sensors(AESA), EW systems and weapons integration can give it that precision strike capability. LANTIRN like pod could be adopted along with drop tanks. So many things can be done to make it do whatever a Rafale can do.

Same for Tejas, the Mk-1A will be as good a strike platform as Mig-27 and Jaguar with the necessary improvements. Range will be somewhat less than Rafale, but then light weight PGMs can be used. Lets end this Rafale fiasco.

Just focus on developing state of the art weapons, sensors that can be integrated on both Tejas and Sukhois.

I am amazed at the sheer ignorance of folks who choose to comment without having their facts right. Acquiring more SU-30 MKIs or Super Sukhois for that matter is not going to plug the MMRCA gap that we are trying to fill. The Su-30's (ridiculously large) air-frame is not designed nor optimized for terrain hugging bombing raids. Additionally because of its large RCS signature it cannot be used for Recee missions either. So, no just acquiring more Su-30s is not the answer !
Secondly, you will eventually need a naval MMRCA platform to operate off the IAC-2 . It would help to have some commonality with the IAF's MMRCA. That leaves us really with only 2 proven fighters to choose from - Rafale & the F-18.
Given Boeing's eagerness to set up shop in India, we have to consider whether it would be better for India to go in for a upgraded F-18 platform with up-rated engines and some stealth characteristics or just play Boeing's offer against Rafale to end up with a much better deal on the Rafale with a "Make in India" component for subsequent orders making up for the deficit in the IAF's requirement. Either way we cannot lose. I like the approach Mr. Parikkar has taken and hats off to him for keeping a calm head and a steady hand as he steers the armed forces out of the quagmire that the previous regime left us in. It's not easy, it's going to take time but I am confident that this man has the balls to straighten this ship !

If the end objective was to negotiate price with a single vendor-Dassault fir Rafale, why did India or IAF waste 5 years with MMRCA drama?

And seriously, how much performance delta is the Rafale bring to the table that the IAF is not even willing to look at other options?

No more Rafael or SU 30 above 272 for Iaf.IAF is already top heavy. SU 35 only if not a mantainance disaster. Already two many types of airframes in Iaf. No more fuel guzzling twin engined fighters. Must care about operating cost of Indian air force. Third production line for tejas mk1A needed . Would create oppurtunity of looking at fast forwarding Tejas export too. Or else find export customer for su30. Already Russians have duped India into contract terms so that Indian made sukhois much costlier than Russian ones. Now Russian must pay for backstabbing a freind in past for short term gains. They valued money over trust. Now they must suffer or else they would be encouraged to do the backstabbing again & again

This travesty has dragged on too many years. Cancel the deal, the price is too high. Invest the money in the Medium Combat Aircraft and upgrading the Kaveri engine to make it the best in class.

Instead of pointing fingers at each other , the discussion should be constructive. Perhaps the following can be discussed :
-Requirement of IAF if it has to go to war on two fronts
-type and variety of fighter aircrafts needs to be reduced
- Numerical strength of Chinese air force , they still operate 700 + MIG 21s, request all the experts and especially the EX and Present IAF PERSONNEL to enlighten this discussion forum , can five to six squadrons of RAFALE/X/Y/Z and 10 squadrons of SU 30 MKI defend Indian air space if China decides to invade with 200 MIG 21s and 100 copied and LOCALLY produced SU30MKK
-In view of above India needs atleast 500 more fighters medium or light with state of the art avionics, countermeasures, AESA and BVR capability
-Does India has the financial strength to procure 500 Rafales, perhaps no , then what is the next best solution
- It is easy to criticize the DRDO , BUT APART FROM COST AND TIME OVERRUN , they have done a commendable job
-Lastly there are many anonymous , apart from serving air force personnel , all others should reveal their identity , by not doing so they are perhaps generating a lot of suscpicion