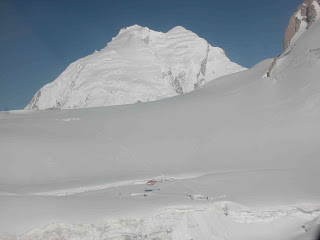 A helicopter lands at Sonam Post, which has now been wiped out by an ice avalanche

Late in 1995, Captain Bikramjit Kanwarpal led a ten-man patrol back to Rinchen Post, high above the Siachen Glacier at 20,700 feet on the Saltoro Ridge. As always, the patrol was roped together so that, if one soldier fell into a hidden crevasse, the rope --- held taut by the combined strength of the others --- would save him. These were ethnic Tibetans from the Special Frontier Force, genetically equipped for these altitudes. Yet, just short of the post, in a rare moment of complacency, the last man in the file unhooked himself from the rope; and fell into a crevasse.

His frantic comrades shone torches into the crevasse and called his name. To their relief he responded; he was 50 feet below, wedged between the walls of the narrow crevasse. A rope was quickly lowered, but an overhanging ledge made it impossible to pull him up. With each attempt, he slipped lower into the crevasse.

As Kanwarpal shouted out orders to the rescuers and reassurance to the victim, the Pakistani post nearby got wind of an emergency. In seconds, artillery fire began raining down, and the Pakistanis opened fire with machine guns.

Yet the rescue did not flag. Eight hellish hours later, the soldier was hauled out of the crevasse, semi-conscious but alive. Kanwarpal radioed for a helicopter to evacuate him, while the rest of the jawans ran to their machine guns and began firing back at the Pakistanis.

“It was dangerous and tiring. But nobody, not even once, thought of abandoning their comrade”, says Kanwarpal, now a well-regarded Bollywood actor.

This never-say-die camaraderie was in evidence this fortnight at another Siachen post called Sonam, where Colonel Um Bahadur Gurung and some 150 soldiers of 19 MADRAS searched tirelessly for 10 comrades buried by a collapsed ice wall. After six days of superhuman effort, nine bodies were recovered and, incredibly, one soldier who was still alive.

Yet, this effort could not save Lance Naik Hanamanthappa Koppad, who died on Thursday in a Delhi hospital. The “Siachen miracle”, as he became known on social media, needed one miracle too many.

“The fifth miracle did not happen”, explains Colonel (Retired) Narendar “Bull” Kumar, the iconic mountaineer who masterminded India’s occupation of Siachen. “Miraculously, Hanamanthappa did not break a single bone despite coming under an ice avalanche --- which we mountaineers call bone-crushers. A second miracle saved him from frostbite. The third miracle was surviving five days and nights below 30 feet of ice. The fourth miracle was being able to locate and rescue him alive. Surviving all this would have been a fifth miracle.”

Siachen is replete with stirring stories of will, starting from India’s arrival in the summer of 1984. With the army spurred into action by radio intercepts that suggested Pakistani troops would soon occupy the glacier, two army platoons (36 men each) were helicoptered --- one soldier at a time --- to two key passes on the Saltoro Ridge, which are the approaches to Siachen from Pakistan-occupied Gilgit-Baltistan. One platoon from 4 KUMAON under Captain Sanjay Kulkarni (a lieutenant general today) took control of Bilafond La. The even higher Sia La was occupied by a Ladakh Scouts platoon, locals familiar with extreme altitudes.

The next six years saw sustained fighting on Siachen as the Pakistan Army, under commanders like Pervez Musharraf, scrambled to respond. The Indian Army, a crucial march ahead, steadily built up troops, eventually occupying key features on the Saltoro Ridge and shutting Pakistan out from even a view of the glacier. The 1990s saw a sullen Pakistani acceptance of Indian dominance on the Saltoro, but artillery and machine gun duels continued, usually to Pakistan’s cost. Since 2003, the Indo-Pakistan ceasefire has held in Siachen; yet, between 10-24 Indian soldiers have died from environment-related causes each year.

Today, five Indian infantry battalions control Siachen at any given time, about 800 men to a battalion. Another five battalions are either acclimatizing and training to be deployed, or recuperating after their tenure on the glacier.

Surviving on the glacier is easier now, thanks to fiberglass shelters, snow scooters and modern communications to deal with the isolation. Yet the hostile climate degrades equipment; and then soldiers quickly find themselves in conditions like those faced by troops in the 1980s and early 1990s.

Major General (Retired) Anil Sengar, who served in Siachen in 1986-87, recalls not even having a tent to sleep in. Units would fabricate makeshift shelters from parachutes and crates used for airdropping supplies. He remembers the wind blowing so fiercely that its icy fingers would find even the smallest tear in the parachute fabric and rip it to shreds.

Kerosene, the most valuable supply, is invariably in short supply, which meant the bukharis (kerosene-burning stoves) that heated the shelters were put off as soon as everyone climbed into their sleeping bags. Within five minutes, the temperature within the shelter would fall to -20 degrees Centigrade.

Supplies are still dropped by AN-32 aircraft at two dropping zones on the glacier. Due to winds, the parachutes scatter across a large area, needing several days of effort to gather and carry those heavy loads to posts that were sometimes 14-16 kilometres away. There were always snow scooters, but they rarely worked in those temperatures. Today, modern snow scooters make the job easier.

For latrines, men used narrow crevasses, squatting over them, holding onto a rope and hoping that shelling would not begin. Artillery, machine-guns and sniper fire were constant realities.

Yet, most of the 879 Indian lives lost on the glacier, including the ten men killed last week, were claimed by weather, terrain and altitude. The army quickly gained expertise in predicting avalanches, and dealing with pulmonary edema, in which the altitude causes fluid to collect in the lungs and suffocate a patient.

Casualty evacuation is almost exclusively by helicopter, but survival very often depends upon the weather. Days of continuous blizzard or snowfall can mean death in some cases. In those altitudes, the tiny choppers that can land on forward posts can carry just a single casualty. There is no place for a nursing assistant, or even the bedding of a soldier being evacuated.

For all these reasons, soldiers posted in Siachen get the highest grade of hardship allowance: Rs 31,000 for officers and Rs 21,000 for the others. Even so, soldiers have sardonic comments about cadres like the Indian Administrative Service, where a posting to Guwahati entitles most officers to Rs 54,000 and the highest grade to Rs 75,000 per month.
Posted by Broadsword at 08:33

This is an aspect rarely looked at by people in our country.The expertise and skill sets created by the Army over the years are invaluable . They need to be better compensated.

pakistan suffered 150 CASUALTIES recently and they are NOT whining

Where as with 10 Casualties ; the Erstwhile Cabal which
preaches about India's Withdrawl from Siachen has been ACTIVATED

Yourself ; GURMEET kanwal and soon a few others will join this CHORUS

Ask Pakistan to Authenticate ; Demarcate and Delineate the AGPL
and we can withdraw

Still The Pakis will TAKE Siachen after our withdrawl

AND CHINA will FINANCE the Pakis to STAY on Siachen

Anonymous 16:19. You stupid git. Don't comment unless you have a meaningful point to add to the discussion.

You can call it whining sitting in ur home If of the 10 Casualties one was your brother YOU WILL NOT CALL it WHINING.Unfortunately a lot of bastards dont realise the difficulties troops face. Hope soon fate takes away ur family member to a road accident and POLICE and passengers do nothing about it and then u will know the meaning of WHINING.

I salute all the soldiers stationed in places like Siachen. Pinnacle of courage and pride to serve the country. Their service is priceless and what paid is a pittance to their sacrifice. Trust me, there are individuals like me who are willing to go to any length for the soldiers.

I think the point Colonal Shukla is trying to make in the end is to 'end the circumstances (unequal pay incentives in this case), which can bring a feeling of "not being treated fairly" compared to IAS, despite the harsh conditions and sacrifices a soldier has to make at those heights'. 'A soldier is a soldier he must do and will do what he is made to do, despite any circumstances', That doesn't mean that Indians should let their Politicians to not give them deserved respect and incentives.

Send some of the IAS officers to Siachen for a week. Pata chale ga. Those intellectual conversations they love to have bhool jayenge. Nani yaad aa jayegi.

To the person who has mentioned 50 casualties: The Pakistanis don't care about their soldiers one bit, we do. THAT is the difference. Their soldiers are like goats in a slaughterhouse......

Something needs to be done about pay grade of civil services , the gap has got bigger every pay commission

Excellent point made. Rs54,000 for IAS guy to sit and relax in Guwahati A/C office and Rs 21,000 only for an already underpaid Jawan, operating in THE most difficult battlefield in the world.

Defence Minister, Manohar Parrikar will you allow this to go on, on your watch ?

What hardship in Guwahati? Is it a remote border location?