DPP-2016 to be released next month: Parrikar 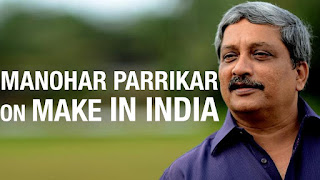 Revealing that Defence Procurement Procedure of 2016 (DPP-2016) is on track to be released in February, Defence Minister Manohar Parrikar termed it a “game-changer”.

“The DPP has already been approved. It is in the final stages where you have to change the appendices and annexures. Maybe next month it will be notified,” Parrikar told a defence industry seminar in Delhi on Thursday.

The new DPP will have overshot Parrikar’s own timeline by a year, but he ascribes that to painstaking consensus building within the ministry.

The defence minister also revealed he was finalising a new, flexible policy to deal with corrupt arms vendors. “I don’t call it blacklisting any more. Probably we will have the discussion today or tomorrow to finalise it. It is now being termed as ‘penal provisions’”, he said.

This would replace automatic blacklisting, and arm the ministry with a range of instruments, including financial penalties and a formula to impose them; short term banning from defence tenders; and, in extreme cases, long-term banning.

“Punishment has to be based on the intensity of the crime, and seriousness. You cannot punish every crime with ten years sentence. Sometimes financial penalties are needed”, said Parrikar.

The minister provided new glimpses into DPP-2016, which he first outlined on January 11. It had promised a boost to indigenous design, and to the “Make” programme in which the government subsidises equipment development by the private and public sector.

With only two “Make” projects actually awarded in the decade since the “Make” procedure was instituted, Parrikar said: “We shall be starting 8-10 projects every year under “Make” category. These will create an eco-system in terms of vendor development.

Owners of micro, small and medium enterprises (MSMEs) in the audience later told Business Standard that 8-10 projects a year were not nearly enough. Given that DPP-2016 includes a special category of “Make” projects for MSMEs, they are looking to the ministry for many more such projects.

There was praise however for the DPP decision to allow vendors to retain the intellectual property (IP) they develop in a “Make” project, allowing them to translate that into equipment for sale in India and internationally.

“The Rs 300 crore limit was set up in 2012; the cost [of defence equipment] has also gone up. Secondly, we are piling up offsets at a huge rate. And no one gives you offsets free…  You have to pay for it up-front in the [equipment] price. And the cost can be anywhere between 12-13 per cent to 17-18 per cent,” said Parrikar.

“Secondly, we have got a lot of offsets which have been [already] signed. $5 billion signed, and another $6-7 billion are in the pipeline. This itself takes it to around $11-12 billion. I think this is enough for us to absorb over the next 8-10 years. Just piling up offsets may not be required,” he continued.

Parrikar also claimed that offsets would be made irrelevant by “Make in India”. “If my full strategy is shifting towards producing the product in India itself, indirectly I’m asking for almost 100 per cent offsets”, said the defence minister.

There were few takers for this amongst Indian entrepreneurs in the audience. As several pointed out to Business Standard, well-structured offsets could benefit both the foreign vendor and Indian industry, which offers high quality, low-cost manufacture that would lower the vendors’ costs. Furthermore, offsets liabilities are piling up mainly because the defence ministry has performed woefully in overseeing and enforcing the offset programme. Finally, even if a high percentage of a foreign weapon system were to be built in India, offsets could be discharged through technology transfer, skills development, and carrying out research & development in India.

DPP-2016 could see changes, with Parrikar repeatedly soliciting suggestions from the environment. “No document can be perfect, and [the new DPP] is also not static. We are willing to take into consideration different viewpoints later, even after it is promulgated,” he promised.
Posted by Broadsword at 09:31

Diluting offset requirements and being unable to properly monitor that offsets are enforced and result in the transfer of new technology is a fairly poor performance. The new policy needs to be scrapped, the old one was better, it just needs to be enforced properly.

Why is the Chapter related to Strategic Partnerships delayed? It can't be because Parrikar and Co are understaffed. When it does come out, it is bound to create a controversy!!

Another interesting issue that seems to be developing is the revival of financially stressed shipyards (private yards). The Defence Minister has clearly stated that the DPP does not allow placement of shipbuilding orders on stressed yards. The MoD seems to be busy in finding a way round this stricture. Parrikar wants to place orders on stressed shipyards through the Shipping Ministry to meet the Navy's requirements. One wonders as to what sort of a mind can conjure up this type of madness.

The intention behind placing orders on distressed private shipyards appears to be to provide protection to promoters who owe thousands of crores to banks (ABG - 11000 Cr, RDEL - 12000 Cr, Bharati (already with Edelweiss ARC). This is borne out by the fact that the Shipping Ministry and the MoD have already cancelled shipbuilding orders on some of these yards for non-performance of contract. Now, Parrikar wants to go back to them through a roundabout route.

Even worse is the mechanism for placing orders as explained by Parrikar. The MoD intends to collate all projects that can be offloaded to Private Yards. This list will then be sent to the Shipping Ministry. The Shipping Ministry will then send it to Cochin Shipyard who will then undertake the lengthy process of order placement. This means that an additional two layers of bureaucracy will be added to the existing gargantuan procedure!!!

Certainly, the dish being cooked up between Parrikar and Gadkari does not smell right.