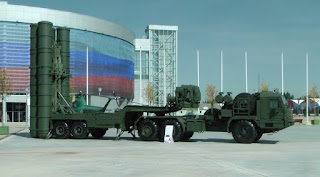 A Reuters report, quoting a source speaking on condition of anonymity, says “the deal for five S-400 units is expected to cost around Rs 30,000 crore ($4.52 billion) but that the final price tag would be negotiated during the procurement process.”

With Prime Minister Narendra Modi due to travel to Moscow shortly for an annual summit meeting with President Vladimir Putin, this purchase is likely to be pursued on a fast track. Parrikar discussed it with the Russians on his visit to Russia last month.

The “Triumf”, as the S-400 is designated in Russia (NATO countries call it the SA-21 Growler) can detect an incoming ballistic missile (usually carrying a nuclear payload) at a range of 600 kilometres (km) and shoot it down when it is still 230 km away, and 185 km above the earth. Fighter aircraft can be shot down when they are still 400 km away.

The S-400, which is in service only with the Russian military, would provide a credible anti-ballistic missile (ABM) shield to cities like Delhi and Mumbai, which would figure high on the target list of any adversary. The S-400 system would complement an indigenous ABM system that the Defence R&D Organisation (DRDO) has been developing and testing for a decade.

Since the DRDO’s ABM system’s current interception range is just about 100-120 km, and could take several more years in development, the S-400 provides an interim capability.

“The S-400 would enhance national air defence capability, by helping in warding off threats from long-range missiles”, it was explained during the DAC meeting, according to the defence ministry source.

Worryingly for Pakistan Army planners (in Rawalpindi), the S-400 could also be deployed to neutralise Pakistani tactical nuclear weapons (TNWs), with which Rawalpindi plans to halt major Indian offensives under the “Cold Start” doctrine.

Faced with the prospect of multiple Indian battle groups, led by tanks, advancing on several fronts and overwhelming Pakistani defenders, Rawalpindi has signalled it would halt the offensive with TNWs. Pakistani generals believe this defensive use of nuclear weapons would be justifiable, since it would be on its own territory, against an Indian invasion.

However, Indian S-400 units, grouped with its strike corps, would undermine the logic of Rawalpindi’s deterrence, by providing a capability to shoot down TNWs before they could strike their targets.

Russian air defence systems have built a formidable reputation, ever since a Soviet missile shot down a U-2 spy plane in 1960, while it was being flown over the Soviet Union on a high-altitude photography mission.

Several countries have expressed interest in the S-400, including Turkey (unlikely to be a customer now, after shooting down a Russian bomber over Syria), Iran, Belarus and Saudi Arabia. China has been extremely keen and, earlier this year, the chief of Russia’s export agency, Rosoboronexport, stated that a contract had been clinched between Moscow and Beijing.

The DAC also cleared the navy’s acquisition of five fleet support ships for Rs 9,000 crore. Each of these 30,000 tonne vessels would be grouped with a flotilla, carrying fuel, ammunition and supplies for warships like destroyers, frigates and corvettes. They also include a full-fledged workshop, allowing a flotilla to refuel, rearm, replenish and repair itself during long deployments at sea.

“This is a part of the navy’s “blue water” vision. Along with three existing fleet tankers --- INS Deepak, Jyoti and Aditya --- the five new fleet support ships will allow the navy to send eight separate flotillas on long deployments, or long-range missions, self-contained for the mission period”, explained a naval officer.

The five vessels will be built by Hindustan Shipyard Ltd, Visakhapatnam (HSL) under the “Make in India” initiative.

The DAC also cleared six additional regiments of the indigenous Pinaka multi-barrel rocket launcher (MBRL), for Rs 14,600 crore. These will be built together by Tata Power, Larsen & Toubro and Bharat Earth Movers Ltd.

The DAC meeting also decided that the DRDO would continue developing a long-range version of the Pinaka, which would enhance the current 40-km range to 60-70 km by including a guidance system in the rockets.

Each Pinaka launcher has 12 rocket tubes, which can be fired in quick succession, with a time interval of four seconds. Each Pinaka battery has six launchers, which means that 72 rockets, filled with high explosive, can saturate a target in 44 seconds.

In addition, the DAC cleared the purchase of 571 light bulletproof vehicles under the “Buy Indian” category, for Rs 310 crore. Indian domestic automotive firms will now bid to build these vehicles, which would be used by troops in counter-insurgency/counter-terrorist operations.

Also cleared were 120 mine trawls for Rs 450 crore, under the “Buy Global” category. Fitted on the front of tanks, trawls churn up the soil ahead, unearthing any buried anti-tank mines. Meanwhile, the DRDO will field four sets of indigenous trawls by mid-2017.

The DAC also cleared two electronic warfare (EW) systems for the mountains, for a cost of Rs 425 crore. Developed by the DRDO, these will be built by Bharat Electronics Ltd.
Posted by Broadsword at 08:07

There's a big gap between "clearing" the acquisition and signing of the contract. I wonder what decade these items will see the service under Indian forces. This arms race with China is making India import lot of expensive stuff.

If the cost is 14000 cr for 36 launchers, it means around 400 crore for each launcher. Is this not too expensive ? Can you tell me how does it compare to other systems in international market. I know that MBRL's have different operational requirement, but what is so complex in an MBRL that makes it 10 times more expensive than an Arjun MkII.

The range of the S-400 vis-a-vis the indigenous AAD-PAD, DOES NOT provide any justification for importing it.

Even if its to be only a "stop-gap" arrangement, then too the AAD-PAD suffices for our needs. That's because by the time the contract is negotiated and signed, DRDO would already have extended the range of the AAD-PAD.

I think the decision makers never did consult DRDO on this matter, and in a fit of petrified panic, approved the "need" of this hugely expensive import.

" Each Pinaka launcher has 12 rocket tubes, which can be fired in quick succession, with a time interval of four seconds. Each Pinaka regiment has six launchers, which means that 72 rockets, filled with high explosive, can saturate a target in 44 seconds."

Actually Pinaka regiment has 3 batteries of 6 launchers each.
https://en.wikipedia.org/wiki/Pinaka_multi_barrel_rocket_launcher

K J Daniel, Project Director, Pinaka, calls it “a system” and explains how massive each system is. A Pinaka battery has six launchers, six loader vehicles, six replenishment vehicles, two vehicles for ferrying the command post and a vehicle for carrying the meteorological radar, which will provide data on winds.[9]

The first Pinaka regiment was raised on February 2000. Each regiment consists of three batteries of six Pinakas each, plus reserves.[11] On 29 March 2006, the Indian Army awarded Tata Power SED and Larsen & Toubro's Heavy Engineering Division a contract worth ₹ 200 crore (US $45 million), to produce 40 Pinaka MBRLs each. Tata Power SED declared that it would be delivering the first units within six months.[12] The Indian Army has placed an intent for Pinaka Weapon System worth ₹ 1,300 crores.[13]

You're absolutely correct. I wrote "regiment" instead of "battery".

Have made the correction. Thanks for pointing this out.

@Abhiman I think the huge problem with the article is why trawls are being bought, when the DRDO has a competing product ready for trials by 2017.

"Also cleared were 120 mine trawls for Rs 450 crore, under the “Buy Global” category. Fitted on the front of tanks, trawls churn up the soil ahead, unearthing any buried anti-tank mines. Meanwhile, the DRDO will field four sets of indigenous trawls by mid-2017."

The S-400, on the other hand makes perfect sense. If Pakistan should conduct another terrorist attack, how will Modi Sarkar hit back? He can't.

But with the S-400 there to protect the cities, Cold Start can be implemented without any problems.

Raahul Kumar, even the indigenous PAD-AAD is there to protect Indian cities. By the time the contract for S-400 is negotiated, the PAD-AAD would already have matched it in range. So, there is NO need of importing the S-400.