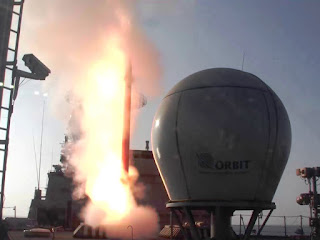 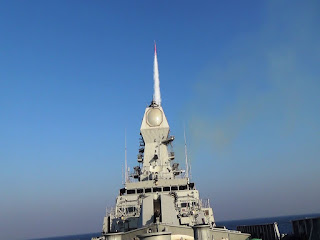 In a giant capability boost for the Indian Navy, a naval warship today test-fired a new missile that can shoot down incoming aerial threats --- such as aircraft and missiles --- whilst they are still 70 kilometres away.

Israel Aerospace Industries (IAI) and India’s Defence R&D Organisation (DRDO) have jointly developed the LR-SAM. The Israelis call this cutting-edge missile system the Barak-8, while India calls it the LR-SAM.

In earlier days, ship-to-ship battles were fought with heavy-calibre guns, requiring warships to come within gun range of each other. Once a shell was fired from a gun, there was no way of intercepting it in mid-flight.

Guns have now been replaced with long-range, anti-ship missiles, which are fired from submarines, ships or aircraft up to 150 kilometres away. Many of these, such as the US-made Harpoon II, are extremely accurate, with sensors on the missile homing it unerringly onto its target. They have a key vulnerability, though. Since a missile is bigger and much slower that a gun shell, it can be detected at long ranges with radar, and then shot down in mid-flight with another missile.

The LR-SAM detects and shoots down incoming missiles and aircraft with a reliability that is said to exceed 95 per cent. DRDO sources say there will be further tests to verify that the missile has been integrated properly onto INS Kolkata.

To engage an incoming missile or aircraft at the maximum possible range, INS Kolkata’s on-board radar --- called the MF-STAR (multi-function surveillance, tracking and acquisition radar) --- can detect it while it is still 200 kilometres away.

After detecting the target in the recent tests, the MF-STAR began tracking it, communicating its key parameters --- distance, altitude, direction and velocity --- to INS Kolkata’s command centre in real time.

Meanwhile the LR-SAM interceptor, located in a vertical canister on the warship’s deck, began its pre-launch checks. Simultaneously, the LR-SAM’s command system was generating engagement scenarios, calculating the exact point where the outgoing missile would impact and destroy the incoming target.

As INS Kolkata’s weapons officer gave the launch command, the interceptor roared out of its canister, engulfing the deck in a ball of fire. At the designated height, it switched to level flight, gained supersonic speed, and streaked towards the incoming target, guided by the MF-STAR over a data link.

About five-to-seven kilometres short of the target, a seeker on the interceptor’s nose switched on, locking it onto the target. To accelerate the interceptor, which was by now merely coasting, the dual-pulse motor fired for a second time. This increased the interceptor’s velocity up to Mach 5-7, enabling it to manoeuvre sharply in tandem with the target’s evasive zigzags.

A few metres from the target, the interceptor’s proximity fuse detonated its 23-kilo high-explosive warhead, disrupting it and preventing it from reaching the Kolkata.

The DRDO termed the test a success, although the “high-speed targets” that the LR-SAM shot down were significantly slower than the actual threats it must counter. Simulated targets travel at 500-550 kilometres per hour (kmph), while the Harpoon anti-ship missile comes in at about 865 kmph; and the Exocet missile at 1,150 kmph.

During the Kargil conflict of 1999, when the navy was preparing for war, the admirals realised to their dismay that they had no counter to the Pakistan Navy’s Harpoon anti-ship missiles. The bigger and more sophisticated Indian warships, some costing half a billion dollars, were vulnerable to being sunk by the Harpoon, which costs less than $2 million. New Delhi approached Tel Aviv for an emergency procurement of the Barak anti-missile missile, which tided over that crisis.

Pleased with the Barak, New Delhi and Tel Aviv agreed in January 2006 to develop a 70-kilometre version of the Barak to counter anti-ship missiles of the future. Given the navy’s “blue water” ambition to control wide swathes of the Indian Ocean, a destroyer or frigate equipped with the LR-SAM would not just protect itself; but also create a protected “air defence bubble” for smaller warships in the flotilla.

India allocated Rs 2,606 crore to this project, which includes Rs 1,700 crore for fitting three Kolkata-class destroyers with the LR-SAM. The Israeli Navy made an equal commitment, undertaking to fit the Barak-8 on its three Sa’ar corvettes.

The work share was divided, with 30 per cent going to the DRDO, which was charged with developing the LR-SAM’s solid-fuel, two-pulse propulsion motors.  Israeli company, Rafael, has developed the rest of the interceptor missile. IAI has built the rest of the systems, including the sophisticated MF-STAR radar.

The delay in the LR-SAM of three-to-four years has been caused mainly by the DRDO’s difficulties in building the sophisticated two-pulse motor. Eventually, it succeeded in developing a stable propellant for this purpose.

After the LR-SAM is integrated on all three Kolkata-class destroyers (Project 15-A); it will be built for another four Project 15-B destroyers being constructed in Mazagon Dock Ltd, Mumbai (MDL); and seven frigates that will begin construction in MDL and Garden Reach Shipbuilders & Engineers, Kolkata (GRSE). The LR-SAM will also be installed on INS Vikrant, the indigenous aircraft carrier being built in Kochi. It is almost certain that several more warships would be equipped with the LR-SAM.

The manufacturing supply chain that is now emerging includes several private sector companies, such as Godrej & Boyce, and SEC. The LR-SAM system will be integrated at state-owned Bharat Dynamics Ltd. DRDO officials say that indigenising numerous sub-systems will bring down the cost of the system.
Posted by Broadsword at 16:41

If the SRM is delayed by DRDO, then how did the Israelis tested their Barak08 and Bark-8ER and already furnished their Saar corvettes?

Seeker and guidance is the most important part of a missile. Seekers are extremely difficult to build and test too...Are the Israelis going to part with this technology to India?

Now that the immediate needs are over, India must follow very strict contracting rules on transfer of technology, profits from exports, and manufacturing technology...

India is now buying ELM-2052 for LCA-1P and they should do a joint development to create the more advanced version with joint design and development...
This way country will move forward...

If Israelis are reluctant, then USA must be approached for joint design projects like GE engines...

If Barak-8 has been tested against a 500 km/hr simulator then how can we have 95% confidence of its success against a Exocet missile which will fly at 1000+ km/hr?
Will the next round of tests be conducted against a high velocity simulator?

Please let me know your opinion

Congratulations to all stakeholders.

Maybe the NAVY should secretly test it on a Brahmos with a dummy warhead.

Hello Ajai, I heard LCA is on it's way to Bahrain Airshow. What's your view on it's maiden debue outside of India whilst FOC is still pending. Do you consider this to be waste of resources or are there really any benefits in doing so.

@Ankit is asking the right question. Will the next round of tests be conducted against a high velocity simulator? How can the Barak-8 be trusted to perform against the best missile in PN's inventory without being tested at that speed?

And China has supersonic cruise missiles, what about them?

90 km as per test result not 70km becuase rocket moter is too good .

excellent boost to the Navy.This will make our new generation warships genuine force multipliers and will enable power projection even in hostile waters.

Hi, so since DRDO has only developed the dual pulse solid propulsion motor why would IAI allow India/DRDO to built anything else in the LRSAM's that's going to be built??