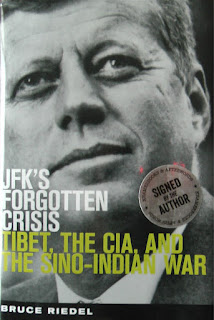 Bruce Riedel is a Central Intelligence Agency (CIA) veteran, who has advised the last four US presidents on South and West Asia. His riveting new book, JFK’s Forgotten Crisis: Tibet, the CIA, and Sino-Indian War, addresses America’s role, and that of President John F Kennedy, in Tibet’s resistance to China’s subjugation and the Sino-Indian War of 1962. Numerous books and articles have earlier recounted America’s support to the Tibetan uprising against China in the 1950s, and its full-hearted response to Prime Minister Jawaharlal Nehru’s SOS as Chinese troops advanced through the North East Frontier Province (NEFA) towards the Assam plains. However Riedel is the first to weave together these multiple strands in the context of US Cold War policies, telling the story from Washington’s perspective.

This is the detailed story of how Kennedy and Nehru, despite the lack of chemistry between them, were induced by their democratic values and principles to come together in the face of China’s aggression. More than any author before him, Riedel marshals logic and evidence of Kennedy’s support to India in 1962 to convincingly argue that, had Beijing not decided to withdraw its forces from Indian territory in December 1962, Kennedy would have accepted Nehru’s request for the US Air Force to send fighter aircraft to defend Indian airspace, freeing the Indian Air Force to strike targets in Chinese territory. In so doing, Riedel presents an alternative answer to an oft-asked question: “Why did China withdraw from captured Indian territory in 1962?”

Riedel provides context and colour to what is already documented about that sombre period. It is known that on November 19, 1962, India’s darkest hour of the war, Kennedy decided to despatch Averell Harriman and a team of crisis managers to India to assess what help was needed. Riedel reminds us of the significance of sending Harriman, who he describes as “an icon of American diplomacy”. In a striking parallel, President Franklin Roosevelt had despatched Harriman to an embattled London in 1941, at the height of the Battle of Britain, to implement the lend-lease programme, which provided Britain the resources to continue fighting Germany. Harriman also coordinated the war effort with Stalin; and, in 1975, was chief negotiator with the North Vietnamese at the Paris peace talks. Riedel convinces with his conclusion: “Sending such a high-level diplomat as Harriman was an important expression of American resolve. So large was Harriman’s team that the US envoy in Delhi, John K Galbraith, lamented the “mission is so large that there doesn’t seem to be any way of arranging conferences with the Indians short of hiring a church.”

The bold argument that Kennedy, and other US allies, would have fought China alongside India is given credence by plans, formulated during Harriman’s visit, for an air defence exercise in India in 1963, which would see US, British, Canadian and Australian fighter and bomber pilots rehearsing the defence of Indian airspace. This exercise was actually conducted, just weeks before Kennedy’s tragic death.

Riedel details a fascinating account of how close Washington and New Delhi came close to what might even have developed into a military alliance. But fate conspired to stall that rapprochement. A five-year, $500 million (big bucks in those days!) military aid programme that Kennedy’s administration drew up was to be sealed at a National Security Council meeting in Washington on November 26, 1963. Four days before that meeting, Kennedy was assassinated in Dallas. His successor, Lyndon B Johnson, was more susceptible to pressure from Pakistan against military aid to India. President Ayub Khan threatened to cut off US access to Peshawar air base, from where U-2 spy planes mounted missions over China. Even so, a meeting was scheduled in the White House on May 28, 1964 to approve the aid. A day before that, Nehru suddenly died. His successor, Lal Bahadur Shastri, continued negotiations, but then, in August 1964, signed a larger deal with the Soviet Union. US Ambassador to India, Chester Bowles, described that as “a lost opportunity” in Indo-American relations.

The 35-year slump in relations that followed has not prevented Washington and New Delhi from coming together again in the face of China’s rise. The author highlights the irony in the fact that Mao’s paranoia about US-India collusion in supporting the Tibetan rebels --- quite contrary to the facts --- brought the two closer together in 1962 than anyone would have believed possible.

Enlivening Riedel’s book are numerous insider tidbits about personalities and events. The briefing notes for Nehru’s visit to the US during Dwight D Eisenhower’s presidency mentioned that the Indian prime minister “liked filet mignon and enjoyed an occasional Scotch as long as it was all in private.” Indira Gandhi, it was noted, shared his culinary tastes. Allen Dulles --- Eisenhower and Kennedy’s CIA chief --- drew his fascination for the Great Game from Rudyard Kipling’s “Kim”, which was by his bedside when he died. Roosevelt House, the New Delhi residence of the US ambassador, was designed by Edward Durell Stone --- the US architect who also designed the main building of PINSTECH (Pakistan Institute of Nuclear Science and Technology), which catalysed that country’s nuclear arsenal.

Riedel is on sure ground whilst recounting the diplomatic dance between Washington, New Delhi and Karachi (then Pakistan’s capital). But he is disappointingly misinformed on the historical backdrop of the Sino-India border dispute. Nor have the editors of the book spotted an annoying series of factual errors, which badly erode the author’s credibility. For example, he writes that China’s October 1962 attack “resulted in China’s occupation of 14,500 square miles of territory claimed by India in Kashmir called Aksai Chin…” In fact China was in possession of Aksai Chin even before the war, and had even built a highway through it. Like in the statement quoted above, Riedel repeatedly ignores the fact that Ladakh is quite separate from Kashmir, with both forming separate parts of the state of Jammu & Kashmir. That leads to jarring errors like his statement: “All of the territory that China acquired in the Sino-Indian War in 1962 was a part of Kashmir.”

Even more disconcerting is Riedel’s apparent belief that the boundary between Tibet and Jammu & Kashmir --- which he calls the Johnson Line --- was drawn in 1914, along with the McMahon Line in the east. In fact the Johnson Line (never a formal boundary) has its origins in 1865, almost half a century before the Simla Conference, where the McMahon Line was drawn. These would be embarrassing mistakes even for a novice. That a thirty-year Central Intelligence Agency official could make such glaring errors, and that editors could let them pass through to publication, are nothing short of astonishing. It is to be hoped that subsequent editions of this otherwise very readable book are free of these errors.
Posted by Broadsword at 11:16

If an Intel Operative can be telling the truth then I have a pink elephant in my basement.

These Americans think we Indians are idiots. India did right by junking the US offer in 1964.

Soviet system delivered on their promise even after internal upheavals and in major international foreign policy changes by them. OTOH, even the US Presidents invariably lie to their own people.

To commenter above,
If I am not mistaken, Soviets refused to intervene when the war erupted in 1962, in desperation Nehru turned to US for help.

Here I would also like to add a little personal story about 1962 war:
I moved to US in my childhood. Many years back after finishing college I was working for a family friend's company, where I met a retired USAF personal, who told me stories about how he with other advance USAF personal were airlifted overnight in secret to New Delhi (in at least four plans) to prepare for further US involvement, what he thought was to prepare for eventual deployment of US fighter to stop the advancing Chinese. It goes without saying that they were on need to know basis and as he was a young and therefore presumably had lower rank did not have have in-depth knowledge of US plans. At the end of the day, before any offensive assets could be deployed, Chinese announced ceasefire and withdrew back to their positions prior to the war. My colleagues and his teams were quietly pulled back.

You are not mistaken about the Soviet desire not to intervene in favour of India. Soviets had no reason to play for either side.

US however even from the time of Sir Olaf Caroe circa 1946 had a deep desire to bring up the Pakis. Even in 1962 the US help did not come only because of the Paki factor that worked in the minds of the US establishment (Ambassador Galbraith) who were trying to two time India.