A return to dialogue 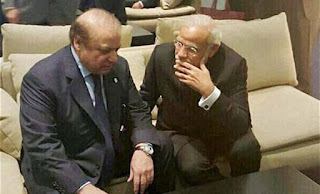 The Bharatiya Janata Party (BJP)-led government has proved as inept at dealing with Pakistan from atop a high horse as the Congress-led one that preceded it. In less than 18 months, this government has twice stomped off from the dialogue table only to shuffle back chagrined both times. On August 18, 2014, less than three months after Mr Modi courteously invited his Pakistani counterpart, Nawaz Sharif, to Delhi for his swearing in, India cancelled a scheduled meeting between foreign secretaries after Pakistan’s high commissioner in New Delhi held consultations with Kashmiri separatist leaders from the Hurriyat Conference. Eleven months later, New Delhi ended its long sulk in Ufa, Russia, where Messrs Modi and Sharif agreed on meetings between three sets of security managers --- national security advisors (NSAs), border paramilitaries and army operations chiefs. That rapprochement was short-lived when, on August 22, New Delhi called off the NSA meeting after Islamabad insisted on broadening the agenda from terrorism alone (as had been mutually agreed at Ufa), to include issues like Jammu & Kashmir (J&K).

This time the Modi government has taken just three months to swallow its anger, ending the standoff on Sunday with a meeting between both countries’ NSAs and foreign secretaries in Bangkok. In so doing, New Delhi backtracked on two fronts. First, it abandoned its earlier insistence on discussing and tamping down terrorism and border violence before resuming the composite dialogue. Foreign Minister Sushma Swaraj had, in August, rationalised the NSA dialogue thus: “Terror and talks cannot take place, but talks on terror are desirable and should be held.” In Bangkok, however, the agenda included, besides terror, composite dialogue subjects like J&K. This climb-down on sequencing was evident from Sunday’s joint statement from Bangkok, which said: “Discussions covered peace and security, terrorism, Jammu and Kashmir, and other issues, including tranquillity along the LoC (line of control).” To save face at discussing subjects other than terrorism, New Delhi sent Foreign Secretary S Jaishankar to meet his Pakistani counterpart, Aizaz Ahmad Chaudhury, while NSA Ajit Doval met his newly appointed counterpart, Lieutenant General (Retired) Nasir Khan Janjua, for a reported four hours.

By holding the NSAs/foreign secretaries meeting in Bangkok rather than New Delhi, the two countries not just avoided the media spotlight, but also finessed the thorny prospect of another meeting between Pakistani visitors and Hurriyat leaders. It remains unclear how the two sides would handle future visits to New Delhi when the prospect of Hurriyat meetings would again arise. Furthermore, Ms Swaraj has come off with egg on her face after having emphatically ruled out meeting Pakistan on foreign soil. On August 22, while addressing the media on the disintegrating NSA talks, she had stated: “Talks will not take place in a third country. When talks are to be held between the two countries, they will be held in New Delhi or Islamabad.”

Despite all this, New Delhi’s return to dialogue is welcome for many reasons. Islamabad will host the annual “Heart of Asia” conference (also called the Istanbul Process) on Tuesday and Wednesday, which India considers an important regional initiative for stabilising Afghanistan. For New Delhi to continue its visible role in Afghanistan, it is important to send a high-profile representative to the Heart of Asia conference. After the Bangkok icebreaker, the decks are clear for Ms Swaraj and her foreign secretary to travel to Islamabad.

Furthermore, Mr Modi accepted at Ufa his counterpart’s invitation to visit Pakistan for the South Asian Association for Regional Cooperation (SAARC) summit next year. With his regional diplomacy floundering, Mr Modi rightly understood the need to rescue India-Pakistan ties from the slough they had fallen into. With Afghanistan-India relations blossoming after President Ashraf Ghani snapped out of his short-lived dalliance with the Pakistan Army, New Delhi could initiate a meaningful bilateral dialogue with Pakistan to address the corrosive, zero-sum dynamic on Afghanistan. Mr Modi will most likely travel to Kabul early next year to inaugurate the Afghan parliament building, which India has funded and built. A stopover in Pakistan, en route to Afghanistan, would symbolise a new arrangement. Finally, the continuing absence of cricketing ties between the two great sub continental rivals is making India --- the undisputed global driver of the game --- seem churlish. Restarting dialogue is likely to restore cricket relations too. Given these stakes, it was hardly surprising that the two prime ministers, meeting on the sidelines of the Paris conference on climate change, green-lighted a return to talks.

There remains the tired question of whether dialogue with Pakistan serves a purpose beyond providing legitimacy to a country that many believe is mired in implacable hostility to India. In fact, as Mr Modi has discovered, Pakistan no longer believes it obtains credibility from dialogue with India. Over the last few years, Islamabad has evinced a notable indifference to dialogue, and to New Delhi’s serial cancellation of talks, in contrast to Pakistan’s earlier eagerness to engage with India. And America, Russia, China and other major powers have willingly engaged Islamabad, despite its numerous transgressions, even as India has waited for a perfect Pakistan to present itself at the dialogue table.

The question now is: will the government manage to sustain dialogue in the face of militant strikes in J&K, ceasefire violations on the LoC, judicial foot-dragging in the trials of the Mumbai 26/11 accused, provocative statements from Pakistan and even occasional terror attacks that will most likely continue? This will depend upon the government’s ability to withstand pressure from a jingoistic press and a rabidly nationalistic social media, and Mr Modi’s willingness to insulate India-Pakistan relations from domestic politics. Has the Bharatiya Janata Party (BJP) learned the lessons of Bihar, or will it succumb to the temptation to deploy anti-Muslim and anti-Pakistani rhetoric (no difference, in some BJP minds) to polarise voters in the forthcoming elections in Assam, Kerala, Tamil Nadu, West Bengal and Uttar Pradesh. If yes, the government will not find the domestic support to sustain the dialogue.

Adding to the difficulty is the fact that there are no low-hanging fruit to create that essential impression of forward movement. Siachen and J&K remain hard nuts to crack; given the sensitivity of water issues, the Tulbul Navigation Project and Wullar Barrage will prove contentious; terrorism has fallen into a pattern, with Indian charges of support to groups like the Lashkar-e-Tayyaba evoking Pakistani counter-charges of Indian support to Baluch insurgents and jihadis in the tribal areas; liberalised trade relations face resistance from agricultural lobbies in Pakistani Punjab; only Sir Creek seems like a dispute that can be resolved without much political risk.

Yet, the value of sustained dialogue does not lie in resolving historically vexed issues. Entrenched hostility would be gradually eroded by increased travel across the Indo-Pakistan border; a shared love for cricket, television and films could be mined for goodwill; the logic of trade, even with protectionist restrictions, would gradually become evident to the majority. Pakistan and India have tried all the alternatives. It is time to see what comes of sustained dialogue.
Posted by Broadsword at 07:42

A biased and unimaginative article spouting the regular base low thinking idea of so called sickularists of this country. Is it so difficult to understand that every time India engages in political dialogue with pakistan the devious designs and machinations of pakistan gets clearer and clearer to the rest of the world?? Therefore India treats each such meet as an exercise in exposure of pakistan. We should continue our blockade of artists, singers, sports persons etc as a clear indication of our statement that we are not friends. Our engagement of this sort indicates to the world that India has not stopped trying but is not getting the correct response from pakistan.

"on August 22, New Delhi called off the NSA meeting after Islamabad insisted on broadening the agenda from terrorism alone (as had been mutually agreed at Ufa), to include issues like Jammu & Kashmir (J&K)"

If I remembered Correctly,
1. It is Pakistan who called off the meeting, not India -> "New Delhi called off the NSA meeting"
2. It is called off not for not including the Kashmir issue, its because the Pakistan NSA where not allowed to meet Hurriyat members -> "after Islamabad insisted on broadening the agenda"

3. The New Delhi made right choice of keeping the meeting in Bangkok. By this Pakistan can avoid its local leaders insistence for meeting the hurriyat members and India's ambition to sideline hurriyat committee in Kashmir talks. Not talking about Kashmir issue, with Pakistan, is never been the agenda. If you have keenly watched this government movement, it all about sidelining any other sources other than India and Pakistan government on Kashmir Issues. I guess this is been partially achieved now.
"New Delhi backtracked" -> You should not call this as backtracking, rather you should call this as India doing right things, for solving the issues.

This is one of such article were our beloved Ajai Shukla have slipped (a little bit).

What a terrible idea. Bharat needs to isolate and punish Pakistan and any country that does business with it. Rather than dialogue, sanctions and using our economic power to punish and isolate the country is the only sensible policy. It simply makes no sense to talk because the Pakistani Army's power lies in fighting with us. That will never change, and the only answer is smashing the Pakistani Army in battle and balkanizing Pakistan. The sooner the government makes that official policy, the better.